To be young is to believe wholeheartedly in certain rosy, soothing illusions—that age, infirmity and death will never come to call, that divorce and the suburbs are fates that only befall other people. And yet, we will all know illness, we will all die and many, though not all of us, will move to the suburbs.

Young families have been moving to the suburbs for as long as there have been young families and suburbs. That many of the young families moving to New York suburbs should be Brooklynites, and that many of them should fancy themselves “creative types” and that they, like their parents and grandparents before them, should believe themselves capable of bringing their superior sensibilities to the land of compromises and comfort should come as no surprise. See: Revolutionary Road.

And yet, the New York Times has seen fit to print yet another style section feature on the suburban exodus of Brooklynites called, what else, “Creating Hipsturbia.” After all, “Williamsburg on the Hudson” ran way back in August 2011. What seems to be entirely lost on these suburban pioneers (and The Times) is that despite their tattoos and their gluten-free baked goods and their farm-to-table restaurants, they are following in the exact same footsteps as their forebearers. The creative types who have long condescended to settle in the small towns of the Hudson River Valley have always carried their tastes with them, along with the notion that they may be in the suburbs, but they are not of the suburbs.

This is the tragedy of the suburbs: they are populated, on the whole, by people who hate to think of themselves of suburban, who cannot stomach the idea that they have abandoned the promises of the city for the comforts of the hinterland. The kinds of people who like to think they are above those comforts—the cars, the lawns, the bigger, cheaper houses—even as they partake of them. Frank and April Wheeler, for all their pretensions and talk of Paris, are not the exceptions, they are the archetypes.

The Times is so busy looking at the surface of things that they fail to see the substance. The style signifiers sprinkled so conspicuously throughout the article—the Fernet Branca cocktails with clever names, the haute donuts covered in maple bacon, the artist who wears his hair in a top bun and “bears tattoos with his sons’ names, Denim and Bowie, on his forearms”—are meaningless. The Brooklyn “brand”—so easily recognizable that we all understand what “six-person-minimum whole-pig dinners” and bars “festooned with Edison bulbs” connote—is an aesthetic and lifestyle sensibility that has already proven itself infinitely adaptable to any number of geographic settings.

Indeed, the Brooklyn aesthetic is so ubiquitous and slavishly adhered to that it displays all the suburban hallmarks that we love to deride. The conformity, the dull sameness, the utter lack of imagination. In his excellent 2005 essay I hate Brooklyn Jonathan Van Meter quotes one of his friends on Williamsburg: “It’s not that I don’t like the culturati hipsters, but the last time I was in an environment where people only wanted to be with people exactly like themselves was in a fucking mall in Minnesota, which is why I left there twenty years ago.”

As Inga Saffron writes in The New Republic, the real problem with gentrification is that it drives out economic, racial and generational diversity, leaving a bland monoculture in its wake. Brooklyn is filled with hundreds of independent businesses so identical to one another that they may as well be chains. Farm-to-table restaurants and are the new Applebees and felted wool antlers are the new Thomas Kinkades.

More to the point, these “hipster” newcomers want the same things that everyone moving to the suburbs has ever wanted: more space for less money, better schools, a slower pace of life. They have young children, they have not become the artists or dancers or musicians they had hoped to become, they have reached the age when they no longer believe that they will, and they do not find the sacrifices demanded by city life worthwhile anymore.

That these young families are being pushed from the city by affluence, rather than poverty, is something worth exploring. The growing impossibility of maintaining anything resembling a middle-class existence in an increasingly upper-class city is a real and pressing problem. But the fresh-faced suburbanites interviewed for the article tell an age-old tale.

Williamsburg roof parties thumping at 3 a.m. were not compatible with raising two young children. The gifted and talented program at the local public school was not up to snuff. Williamsburg no longer seemed central to the life they were living or wanted to lead. They were looking for a more peaceful environment, the country life not far from the city. The suburbs afforded more space to pursue the hobbies so central to the Brooklyn D.I.Y movement.

Brooklyn, with its brownstones and backyards and leafy streets, has long been a proto-suburb for Manhattanites. That those who embraced the lower-density and less frenetic streets of Brooklyn should be drawn to suburban life is not surprising.

“To abandon the idea of Brooklyn is to admit that a certain idea of Brooklyn has died, or that they are no longer part of it,” the article claims. On the contrary, rather than stifling one’s ability to lead a “Brooklyn life,” the suburbs are an ideal place for a culture that glorifies domesticity and revels in homemaking, in baking and butchering and knitting and soapmaking and quilting and letterpressing. The Brooklyn ideal is not the urban careerist, but the rural crafter. The most hardcore Brooklynites are the ones who never really wanted to be in the city in the first place.

As one formerly-urban soap maker who now enjoys “pajama jams” in her basement music studio tells The Times: “We keep to ourselves a lot more, keep to our hobbies a lot more, which for creative types is great.”

Honestly, what better way to enhance the insular qualities so particular to the Brooklyn brand, to nurture the inward-looking, self-reflective culture, than to shut out all the noise and messiness of urban life?

It’s all come full circle, a development augured when Martha Stewart, the homemaking doyenne of the ‘burbs, became the patron saint of the Brooklyn craft crowd. The return to the suburbs—where many of the Brooklyn hipsters came from in the first place—is not a really a reverse migration. It’s a homecoming. 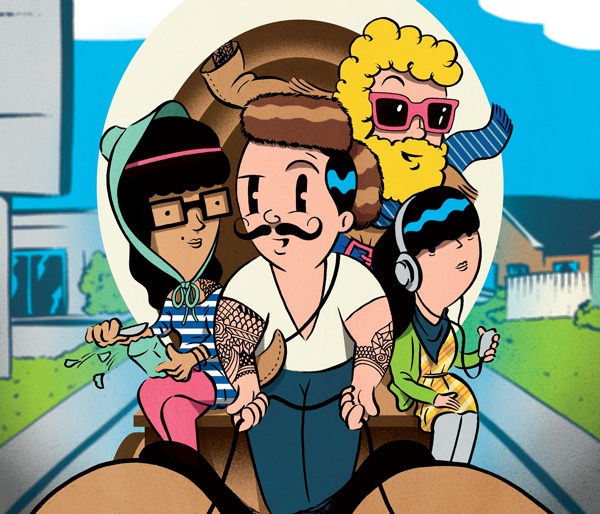