A second employee of Birdsall Services Group pleaded guilty to participating in a scheme in which the firm fraudulently avoided the restrictions of New Jersey’s Pay-to-Play Act by disguising illegal corporate political contributions as personal contributions of employees of the firm, Attorney General Jeffrey S. Chiesa announced this afternoon.

In addition to the two employees who have pleaded guilty, a third employee of the Monmouth County engineering firm, former Executive Vice President Thomas Rospos, faces a pending indictment in the case, Chiesa said.

Eileen Kufahl, 48, of Bradley Beach, pleaded guilty yesterday to a fourth-degree charge of making prohibited corporation contributions through employees before Superior Court Judge Wendel E. Daniels in Ocean County. Under the plea agreement, Kufahl must forfeit $17,119, which represents the total of the political contributions that she made under the scheme, which were allegedly reimbursed to her by Rospos.  The state will recommend that Kufahl be sentenced to a term of probation.  She must cooperate fully and testify truthfully in the ongoing investigation and any resulting prosecutions.

On Nov. 30 of last year, Philip Angarone, 40, of Hamilton (Mercer County), the former marketing director for Birdsall Services Group, admitted in court that he took part in the scheme, pleading guilty to third-degree tampering with public records or information and fourth-degree prohibited corporation contributions through employees.  He faces up to 364 days in jail and a term of probation.

In a statement, an attorney for the firm said Birdsall is under new management and is moving on.

“The allegations outlined by the Attorney General’s charges all occurred under previous management at Birdsall Services Group and have all been fully addressed by the new leadership of the company,” said attorney Joseph Hayden. “We have been fully cooperating with the Attorney General’s Office throughout the course of this investigation and the company’s leadership has taken swift action to address the matter which has resulted in a new CEO, significant personnel changes, and the hiring of former New Jersey Supreme Court Chief Justice James Zazzali, who will oversee the newly established internal processes to ensure complete compliance going forward.”

The AG’s Office detailed the scheme.

Kuhfahl and Angarone admitted that instead of Birdsall Services Group (BSG) making corporate political contributions to campaigns and political organizations that would disqualify it from public contracts awarded by certain government agencies, shareholders and employees of the firm would make personal political contributions of $300 or less, which are deemed unreportable.  Multiple personal checks would be bundled together at BSG and sent to the appropriate campaign or political organization.  Shareholders and employees would then be illegally reimbursed by BSG in the form of added bonus payments – or, in the case of Kufahl, would allegedly be reimbursed by Rospos, who was reimbursed by the firm – and the firm would falsely omit the illegally reimbursed contributions in documents filed with the Election Law Enforcement Commission (ELEC) and with government agencies that awarded the firm engineering services contracts.

Contributor information, including name, address and employer, must be reported to the Election Law Enforcement Commission (ELEC) for contributions of more than $300, but such information does not need to be reported for contributions of $300 or less.  Every for-profit business entity in New Jersey that has received $50,000 or more in government contracts in a calendar year must file the Business Entity Annual Statement (Form BE) with ELEC to report public contracts that it has received and reportable political contributions that it has made.

Angarone admitted that on the Forms BE filed for BSG, he and others at the firm fraudulently failed to disclose the illegally reimbursed political contributions.  In addition, he admitted that in connection with proposals submitted by BSG to receive public contracts, the firm filed numerous false Certifications of Compliance declaring that the firm was in compliance with pay-to-play rules.

The state investigation revealed that between January 2008 and May 2012, Rospos allegedly made hundreds of purported personal contributions to campaigns and political organizations across the state, both Republican and Democratic, which were illegally reimbursed by BSG. His contributions totaled in excess of $150,000.

Rospos, 61, of Belmar, was indicted on Dec. 11, 2012, on second-degree charges of conspiracy, making false representations for government contracts, misconduct by a corporate official, and money laundering, as well as various third- and fourth-degree charges.  Those charges are pending. 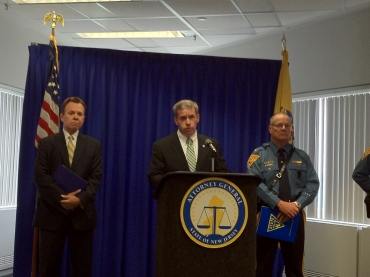