Last Friday, a few hours before the opening of his new exhibition, the artist Anthony McCall was standing on a large pile of crumpled newspaper pages that covered the floor of a small room inside Sean Kelly Gallery on 10th Avenue. In the center of the room was a screen that was playing old footage of a group of people standing on a large pile of crumpled newspaper pages that covered the entire floor of a small room, taking one another’s photographs. You could tell the footage was old because everyone in it wore bell-bottoms and had feathery, shoulder-length hair. There was no sound in the film itself, but there were speakers playing—uncomfortably loudly—the various sounds made by the exact types of cameras seen in it. There were mirrors on opposite sides of the room, as well as in the room in the footage, so that the reflection of the screen repeated. A young Mr. McCall appears in the film, his hair brushed out of his eyes across his forehead, wearing one of those skin-tight mucus-colored shirts that seem to have only been manufactured in the 1970s; his presence in the room at Sean Kelly, older now, looking almost stately, with thinning gray hair cropped tight to his scalp, only made the echo chamber of the installation stranger.

“Back then,” Mr. McCall told The Observer, “when these photographers were filming one another like this, it seemed like a kind of dystopian hallucination. But now, all this looks to me very familiar, this process of filming one another. All these people in the film have smartphones now.”

The performance of the photographers and filmmakers—Mr. McCall’s friends—photographing and filming one another took place over the course of 45 minutes at London Polytechnic Film School in 1972, but the completed piece, the footage and the replication of the room, called Circulation Figures, wasn’t exhibited until 2011, when it was shown at the Museu de Serralves in Portugal. This is partly because Mr. McCall took that long to finish the work, and partly because he was about 40 years ahead of his time. He’s best known for his “solid light films,” animated line drawings that are projected onto surfaces by beams of light—made visible by dust, smoke or, more recently, a haze machine—that take on three-dimensional forms. A new solid light piece, Face to Face, is installed inside another room at Sean Kelly, with columns of light that look from a distance like sheets suspended in the air or, upon closer inspection, long tunnels that can be entered and walked around in. They project evolving drawings onto double-sided screens that look like a moving Fred Sandback piece. The world wasn’t quite ready for this in the ’70s. Mr. McCall found some success in experimental film circles, but he retired from making art, focusing instead on designing exhibition catalogs for the museums and galleries that should have been showing his work. It would be a few decades before he’d return.

He was making performance work that dealt with setting fires in the English countryside and inviting people to watch. He started filming them so he’d have a record of the work. He’d never made a film before, but he became interested in the mechanics of it, and found Andy Warhol’s Empire—an eight-hour continuous shot of the Empire State Building—particularly interesting. He decided he wanted to make a film that existed “only at the point of projection.”

“In the case of Empire,” he said, “there is an elsewhere—the Empire State Building—and there is a past time—the time when it was shot. So I was interested in a film that had no referent in the past or elsewhere.”

What he came up with was Line Describing a Cone, a projection of a white dot becoming a circle over the course of half an hour, produced by “a cone of light coming into being.” It took about four days and $100 to make. He’d return to this premise throughout the ’70s, using light simultaneously as a moving sculpture and a two-dimensional projection.

The art scene in London at that time was very small. There were expensive galleries that showed paintings, and there were two major galleries representing conceptual art—Nigel Greenwood Gallery and the Lisson Gallery. Beyond that, there wasn’t much. In January 1973, Mr. McCall moved to New York with an American performance artist with whom he’d been living in London. Soho was just starting to transform from a neighborhood of squatters and abandoned warehouses into an art district. Galleries were “not terribly interested” in him, he said. He showed around here and there, mostly at the Millennium Film Workshop, founded by filmmaker Ken Jacobs, and at the Collective for Living Cinema, founded by students of Mr. Jacobs. In 1977, Line Describing a Cone was included in Documenta 6, the first time the survey of contemporary art in Kassel included a section for film, video and photography.

“That was quite a well-known film,” he said. “Word had gotten out.” But as Soho began to expand and his friends started to join galleries and exhibit regularly, Mr. McCall didn’t have any luck.

“It’s not that they weren’t perfectly polite about it,” he said. “Occasionally they’d show something in an evening. But it’s not what they did, really.”

As he spoke, an employee at Sean Kelly entered the room and interrupted.

“Uh, would you guys like a little light in here?” she said. We’d been sitting in the dark and hadn’t really noticed. She flicked a switch.

By the late ’70s, the art world was changing. Artists were scrambling for representation, and the galleries were getting bigger, and glitzier. There wasn’t a market for film or video art. There was some interest in Mr. McCall’s work abroad, though, and museums and kunsthalles were asking to show his light pieces. But something started to happen that he’d never considered before. The solid light works were all made in his loft, and were subsequently shown in lofts downtown, all spaces that had been manufacturing warehouses just a few years before. The presence of a handful of people, a few of them inevitably smoking cigarettes, would kick up enough dust and smoke to make it possible to see the columns of light.

The museums, though, “were clean as a whistle,” he recalled. “No dust. And that dust was the medium which made my work visible. I found it was impossible to solve this problem of invisibility. I’d come up on a brick wall and thought that I must have made quite a big aesthetic error with what I’d chosen to do. I couldn’t see a way forward.”

He tried all kinds of solutions. He filled film canisters with sand and put a piece of charcoal and frankincense in the center, and then lit the whole thing to create a smoky atmosphere, but it disappeared quickly and wasn’t enough to fill an entire room. He tried dry ice, which was “useless” over long periods of time. Someone recommended he bang blackboard erasers together to produce a cloud of chalk dust. In the early ’80s, he quit the art world. To make a living, he started a business designing art books. He called his career shift “absolute.” He stopped making art entirely for two decades. “Definitely something to tell the shrink,” he said.

The design business took off. He had a small studio with about five staff members and steady work creating books for the likes of Mary Boone, Gagosian, L.A. MoCA, the Whitney and the ADAA Art Show. But all the while, the world was starting to catch up with Mr. McCall. What he had been doing in the early ’70s now had a name—installation. Video art had become the new wave at commercial galleries with the rise of Matthew Barney, Mike Kelley, Bill Viola and others. Most importantly, the haze machine had been invented, which allowed Mr. McCall to synthetically fill a room with a thin layer of smoke for hours at a time. He tucked away that bit of information and saved it for later, conveniently remembering it when “I thought I might explode if I did another art book.” He started gradually scaling back his role in the design business. In 2003, he made his first new work in 20 years. By the next year, he had a small retrospective at the Tate Modern, where he exhibited solid light pieces for the first time the way he’d wanted them to be seen three decades earlier. In 2007, he began showing with Sean Kelly and had his first solo gallery exhibition ever. It was only a few decades overdue.

“When I started making art again,” Mr. McCall said, “somebody asked me if I was the same Anthony McCall who made art books. They said, ‘For years I always thought there were two Anthony McCalls. I said, ‘So did I!’” 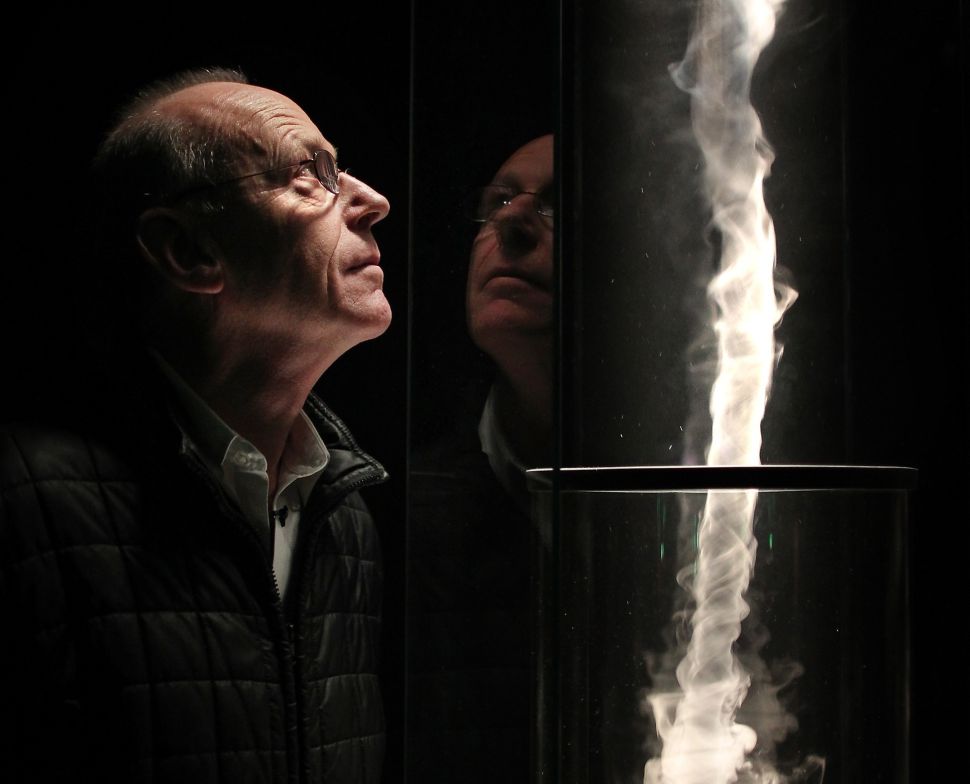