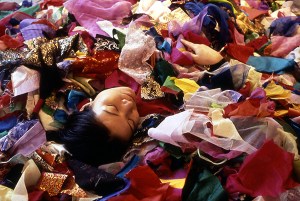 Despite previous reports that South Korea would send a group show to this year’s Venice Biennale, it appears that installation artist Kimsooja—a regular at MoMA PS1 and other New York venues—will be the country’s sole representative (Blouin Artinfo broke the news). Kimsooja is no stranger to the City of Bridges; this will be her fifth time exhibiting at the Biennale (she also participated in 2007, 2005, 2001 and 1999). It won’t be the artist’s first time working with Biennale director Massimiliano Gioni either—he curated the 2009 Gwanju Biennale in Korea, in which she appeared.

Kimsooja was the artist in residence at MoMA PS1 from 1992 to 1993, where she presented Deductive Object (1993), an installation involving a pile of Korean clothing and tattered scraps of fabric attached to the walls. Later in 2001, MoMA PS1’s director, Klaus Biesenbach curated a solo show of her video works, including her best known piece A Needlewoman (1999–2001), for which the exhibition was named. Kimsooja has exhibited and performed elsewhere in New York, such as the 2002 Whitney Biennial, James Cohan Gallery, Peter Blum Gallery, the Kitchen, Creative Time, the Queens Museum of Art and the Bronx Museum of Art.

Kimsooja often uses “bottari” (a Korean term meaning “cloth bundle”) in her work, and we can expect to see this recurring subject at the Biennale. Here’s a little more information from Artinfo on what she has planned:

“The artist’s concept of bottari as a self-contained world will be reflected in the transformation of the pavilion’s space — not physically with glass, metal, or wood, but with nonmaterial elements such as sound, light, and color. She will attempt to bring nature indoors, to be viewed from inside out.”

According to The Korean Herald, Kimsooja will also address natural disasters with her installation, inspired in part by her experience during Hurricane Sandy: “I lived without electricity, gas and hot water for a week when the storm Sandy hit New York. I thought many things during the time. My new work will involve frequent natural disasters happening around the world,” she said.