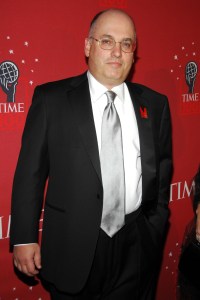 At The New York Times Carol Vogel reports that the Museum of Modern Art has recently received a number of important donations, most notably from Steven A. Cohen, the collector and hedge funder currently the subject of a major insider trading investigation.

Among the completed gifts from [Cohen] and his wife, Alexandra, is an untitled painting by the German artist Martin Kippenberger from his series “Dear Painter, Paint for Me.” It is a photograph of Kippenberger seated on a discarded sofa on a New York City sidewalk. Another is “Rancho,” a 1968 canvas by Ed Ruscha — one of his so-called “liquid letters” paintings, or canvases with letters rendered in a trompe-l’oeil manner so they appear to be dripping down the canvas or are still wet. A third Cohen gift is an untitled Cy Twombly sculpture from 1955.

More recently the Cohens gave MoMA “House of Flowers (see you there),” a painting by the British artist Peter Doig from 2007-9. It’s a colorful canvas depicting a lone, shirtless man.

You have to wonder about the timing, since he sure could use some good press right now. “Your honor, my client is a major philanthropist who recently donated works worth millions of dollars…” Can’t you hear it? Still, we got some art out of the whole thing, so be happy, people.