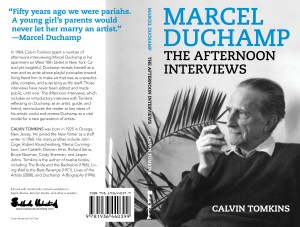 It’s often difficult to interview artists. This is not to say they’re inarticulate—far more often the opposite is true—but because artists make a career of nonverbal communication, speaking with them always has a looming sense of: well, what is there to talk about? Their art? All you can hope for is footnotes. Their lives? Their business? Their practice, every little element of it? And then occasionally throw out some inane comment like “that’s great” after they tell you about some new resin they’ve discovered? What was wrong with the old resin? Come to think of it, you didn’t even know that was resin.

Over his 52 years at The New Yorker, Calvin Tomkins has managed to establish a system for his artist profiles that renders his subject, no matter how radical the artist may seem, straight and with clear angles. The result is always masterful, but a new book out next week, Marcel Duchamp: The Afternoon Interviews (Badlands Unlimited/D.A.P,
110 pp., $16), strips away this prosaic lens and offers the unedited transcripts from the writer’s meetings with Duchamp in 1964, interviews conducted ahead of a major profile in The New Yorker that ran the following year. The book comes out at a perfect time: 2013 is, of course, the centenary of the first readymade, Bicycle Wheel, and the debut of Nude Descending a Staircase at the inaugural Armory Show in New York.

“There’s no denying that Duchamp is an icon,” said the artist Paul Chan, Badlands’s founder and publisher. “But I think one of the easiest ways not to think about a person is to turn them into an icon, because someone who’s iconic, we think we know all about that person. It’s refreshing and bracing to hear Duchampian ideas from the mouth of Duchamp.” The e-book version even comes with audio clips of the artist’s freewheeling, heavily accented answers.

“He had that wonderfully easy manner,” Mr. Tomkins said in an interview about the book. As with any journalist, though, it wasn’t always enjoyable to listen to his old tapes. Mr. Tomkins, whose 1996 book Duchamp is considered the authoritative biography of the artist, said he was a relative rookie then, and now he wishes he’d asked a few crucial questions, like what had happened in the year Duchamp spent alone in Munich, just before 1913. Still, he said, Duchamp “never hesitated to answer anything or talk about anything, and even my questions which I think are sometimes a little less intelligent than they might have been, he had a way of turning them into something interesting.”

Messrs. Chan and Tomkins went through about six hours of tape, which they then edited into a cohesive dialogue. Throughout the interview, the 39-year-old Mr. Tomkins largely stayed out of the way of the 77-year-old Duchamp, whom he’d met five years prior while working for Newsweek. They spoke at his home on West 10th Street, where Duchamp spent most of his days playing chess, having supposedly retired from the world of art. The New Yorker profile slightly underrates the extent to which Duchamp was still an artist at that point, simply because the piece strove to tell a more comprehensive story. We now know that he was in fact still making art—a major installation, Etant donnés, was shown posthumously at the Philadelphia Museum of Art in 1969 (it’s installed at the museum today as part of its permanent collection)—and in the transcript, it’s clear that the contemporary situation was on his mind. He speaks about the modern age almost as much as he speaks about his own life, and he proposes theories on where art is headed, with praise for Robert Rauschenberg, Jasper Johns and some elements of Pop Art.

With the exception of touchstones like those, much of the dialogue reads as though it might have been spoken yesterday. His thoughts on the market are particularly prescient. Collectors, he notes, are “parasites” on the “beautiful flower” that is the artist, and they always pay “either too little or too much—which is good in both instances.”

“It’s very pleasant in a way, because there is the possibility to make a living,” he adds in another quote that didn’t make it into The New Yorker. “But the state is very detrimental to the quality of the work done.”

The book presents this prototypical artist in his purest format, which seems consistent with Duchamp’s ethos. As Mr. Tomkins notes in the beginning of his New Yorker piece, Duchamp at that time began to think of the artist as a “mediumistic being,” someone external to whatever experience a viewer might call art. “The poor Mona Lisa is gone,” says the man who once complimented her non-visible hindquarters, “because no matter how wonderful her smile may be, it’s been looked at so much that the smile has disappeared. I believe that when a million people look at a painting, they change the thing by looking alone.”

Duchamp was no recluse, but it’s hard not to see a parallel to his own existence. He was never prolific, so in his own time everything he did was viewed as a clue to the riddles he hid in his work. In the New Yorker profile, Mr. Tomkins notes that Duchamp once opened a dye business, and one “young Duchamp disciple” saw in this “a conscious play on words between ‘teindre’ (‘to dye’) and ‘peindre’ (‘to paint’)—a discovery that Duchamp regards as entertaining proof that in this sort of scholarship anything goes.” There exists to this day a pet theory that the readymades were not in fact found objects but made by Duchamp himself. What that might mean for his oeuvre is anyone’s guess.

“I’ve never quite understood it myself,” Mr. Tomkins said of such theories. “Because I always found him so open and comfortable with himself and so unsecret. He didn’t obfuscate. He was open and available and intelligent.”

Duchamp understood that art has a shelf life regardless of whoever’s looking at it, and that was one part of his life that was consistent with his practice. In the introduction to the new book, Messrs. Chan and Tomkins compare Duchamp to Michel de Montaigne in his dedication to privacy, freedom and mutability.

“He was not afraid to explore and change,” Mr. Chan said. He knows something about that himself, having semi-retired from art-making, as Duchamp did (though Mr. Chan contributed to Documenta last summer).

Above all else, Duchamp was out to do something new, and as the transcript makes clear, he understood that this wasn’t simple. Moving past the concept that art had to be made by the artist was in some ways the easy part. In works like Nude, Duchamp was trying to capture the “fourth dimension”—which he didn’t think was time, much as that subject did interest him. He was trying to capture the idea that “when I hold a knife, a small knife, I get a feeling from all sides at once.” During sex, he said, people feel every aspect of a partner. For an artist who had already made strides toward the post-medium with his readymades, this fourth dimension concept almost reduces painting to technical support.

Perhaps that’s overreaching, though Mr. Tomkins says he also wishes he’d asked him more about the fourth dimension. There’s still much to study about Duchamp, he said, since his legacy is so widespread.

“He broke down the limitations on art, the boundaries, and it seems to me that this has today become a kind of an article of faith on the part of younger artists,” Mr. Tomkins said. “That they are not constrained by any traditions, that they have to defend their own way completely and that they’re no good unless they do. He’s not the only one, but I think he was one of the artists that was instrumental in this whole process of doing away with the idea that there was a way of doing things in art and that you had to learn it and follow it.”

“There’s nothing necessarily new in the interviews,” Mr. Chan said, “but it does give a flavor of the man, and hopefully it does give to a new generation of people a renewed interest in Duchamp.” 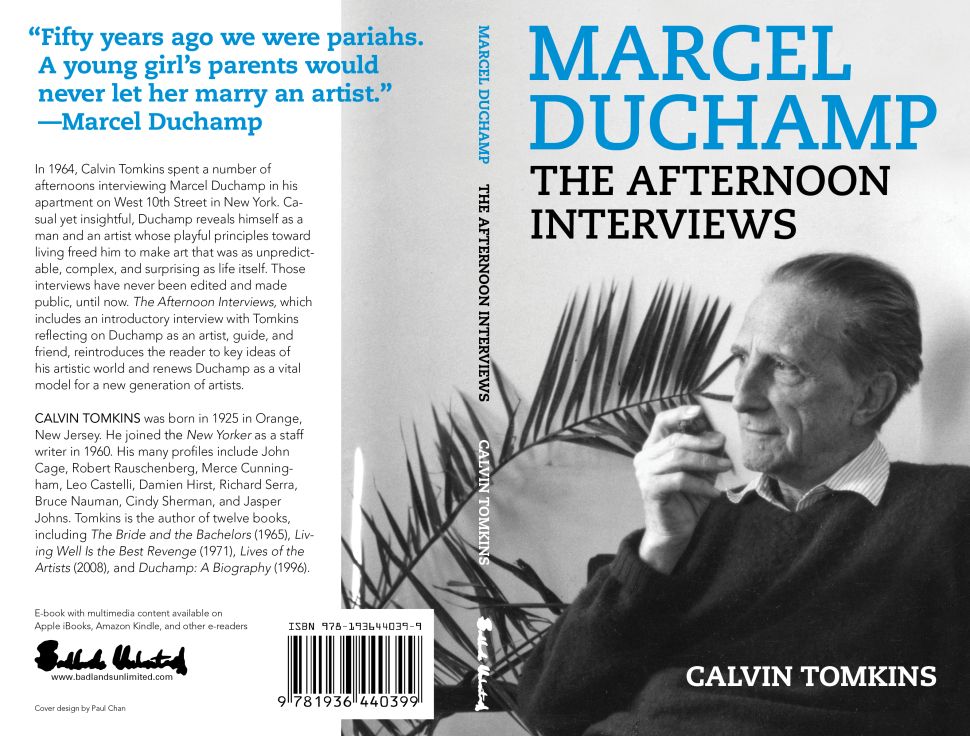