PolitickernNJ.com’s 2017 power rankings anticipate an infusion of political oxygen restored to New Jersey after an era of trepidation for every other politician in the state whose name is not either Gov. Chris Christie or state Sen. Barbara Buono (D-18).

Buono’s allies want to summon that energy now, and may yet summon it in time for the 2013 general election.

But if Christie defeats Buono (he’s leading her 42 points, according to today’s Monmouth University poll), his departure prior to the 2017 gubernatorial field would create a decided uptick in ambition.

The following candidates are poised to take advantage…

Pluses: While Christie campaigned nationally, Guadagno was holding a Styrofoam cup in a nameless corner of the state enduring the interminable, close-quarters war stories of any number of nameless Republican candidates who never got within 30 points of their intended targets. A rubber chicken circuit favorite, the lieutenant governor has built good credit with party organizations. There’s this too: if the sitting governor leaves office to run for president, Guadagno could end up running as the incumbent.

Negatives: With apologies to Carl Lewis, she’s basically been bubble wrapped for four years, a reliably bashful second banana presence whose only experience with a podium consists of standing on a designated strip of tape far from the microphone. (BREAKING: She has a press avail Wednesday).

Pluses: It all hinges on this current campaign season. If the state senator from LD 18 exceeds expectations she will be well positioned to McGreevey-ize herself and run again in 2017 – as the only person who had the guts to oppose Christie. Of course, she could also defy the long odds, win, and be in a position to run for re-election.

Negatives: People in her own party – establishment players quietly seething over her political resurrection – want to make sure she’s properly damaged now so they don’t have to worry about her four years from now – probably her biggest 2013 challenge. But even a solid showing this year is, in a way, problematic. Unless Buono beats Christie, she also will be out of office, and short of landing her own MSNBC show, will be relegated to the sidelines in a culture increasingly suffering from collective attention deficit disorder.

Pluses:  He’s Corzine with charisma – the candidate who can show up to an event with enough fun money to automatically capture the imaginations of otherwise moribund Democratic chairs long deprived of a reliable statewide cash cow.

Negatives: This is strictly speculation, but he may have agreed to a pursuit of the U.S. Senate by writing off 2017. His staying power statewide is another question. It’s hard to believe his collected tweets between book covers won’t be best seller material – but will they have lasting impact? The good news for Booker is the answer to that question might not matter in an increasingly distracted age.

Pluses: He won’t have to try to match up against Gov. Chris Christie, his ally on key initiatives. The ironworker possesses strong union and establishment Democratic Party ties.

Negatives: Rob Andrews’s ill-fated efforts to go statewide still hang gloomily over South Jersey. There might be a collective case of Democratic Party guilt too over the Christie era that could stick to Sweeney if he’s perceived during the next three years as not exacting wins over the Republican governor.

Pluses: She’s stayed on her feet for three plus years in a difficult leadership position.

Negatives: If Sweeney or Booker runs, she would have to run off the line in key counties. By that point she might be sufficiently fed up with the antics of the establishment to go rogue, but the calculation would put her outside the organizational comfort zone that has nursed her to legislative prominence.

Pluses: By 2017 Greenwald will be a veteran lawmaker and possibly a sitting speaker – if he can convince enough people in his caucus that he’s more lovable than unbearable.

Negatives: That’s still a significant “if” at this point. Right now he has the organizational credit, man hours logged and political pedigree. He just needs to convince his colleagues that the Gordon Gekko routine is a ruse to lower the GOP’s guard in a street fight. If Greenwald does not do that – with the likable Assemblyman John Burzichelli (D-3) in the wings already generating ink as an alternative – he could emerge as South Jersey’s version of the next Barbara Buono: a fallen majority leader in search of statewide payback.

Negatives: He’s got that 2006 loss to Menendez staining his resume, plus the years of accumulated deliberation in the Senate reflecting no obvious executive temperament. If Christie lacks coattails running for re-election this year, GOP insiders will look for a way to shield the governor from criticism and blame Kean.

Pluses: Name ID. No one knows he pronounces his name differently and isn’t actually related to the former governor. But Kean arguably has the advantage of the name, without the Greenwich clench.

Negatives: As with other talents on this list forced to play secondary roles for the sake of keeping older men afloat, Kean could go statewide run if he can’t get out from underneath the LD 30 encumbrance of Sen. Bob Singer. As such, it’s possible he would be running as a GOP renegade, an obvious disadvantage in an organization state.

Pluses: If he gets through a tough 2013 election year, he will have earned a place as an unbreakable district-wide brand. Unlike some other legislators on this list, he also has executive credit. Whelan is, in fact, the only former mayor of Atlantic City in recent memory who didn’t end up either in handcuffs or walking out of City Hall with a hood pulled over his head.

Negatives: As a member of the South Jersey Democratic family, like others on this list, he won’t move up unless others with more seniority or closer ties to the epicenter of Camden power first indicate their desire not to run for governor.

Pluses: At least in terms of personality, he’s the anti-Romney. After the Christie era, Bramnick’s genial style may play well to organizations tired of getting their heads ripped off.

Negatives: Kean is technically higher on the GOP food chain, and probably closer to another statewide run, which means Bramnick would have the opportunity to grab Kean’s Senate seat before risking his capital on governor.

Pluses: Everything depends on what happens in May. If Fulop defeats incumbent Jersey City Mayor Jerry Healy, he will vault to the front of the pack among Democrats jockeying for 2017 consideration.

Pluses: A hero cop who became mayor of the blue collar maritime town, Smith has genuine leadership qualities, a story and an executive profile.

Negatives: He could go down in history as the man blamed for heavy casualties this year if the Christie campaign gnaws away large portions of Hudson County.

Pluses: He occupies the most powerful elected office in the most populous Democratic Party county. He also has a history of building and maintaining fruitful political relationships.

Negatives: A party pushed around and humiliated by Christie might feel less inspired to embrace Christie’s most obvious Democratic allies, arguably a hazard DiVincenzo shares with nearly every other person on this list except Buono and other relative no-namers.

Pluses: Liked – even well-liked – Kyrillos has never appeared craven or conniving in a universe of Iagos.

Pluses: Well liked early with labor backing; he has strong organizational ties and a reputation as a relentless campaigner. If he makes it through this year in a competitive general election, he will have strengthened his credit as a strong battle-tested Democrat.

Negatives: A proud member of the South Jersey Democratic team, he’s not going anywhere unless the veterans first decide they won’t run. Plus, he’s rumored to be on track to Assembly leadership, and likely won’t jeopardize that by running for governor before he gets to speaker – still a few years away.

Pluses: Along with Whelan, she’s one of the most battle-tested incumbents in the state right now, a proven blue collar brand name and the senator of bellwether Hamilton.

Negatives:  She’s a deliberative body brand, not an executive – at least that’s what her detractors will argue in the event she ever tries to break out of senatorial mold and run for governor.

Negatives: Age (69 in time for the 2017 campaign trail), too much time as a legislator in a dysfunctional state, and arguably too much time teasing the electorate and not pulling the trigger likely add up to non-starter territory for this veteran. Runs by DiVincenzo or Sweeney might motivate Codey to get in the race, but he’d be playing the spoiler.

Pluses: The west Essex County brand name has executive experience as the former mayor of West Orange and a wealth of legislative cred – a highly regarded former chair of the Assembly Environment Committee.

Negatives: He’s in a box. He doesn’t have deep countywide organizational support in Essex County let alone the state.

Pluses: He’s been there and done that – twice. He ran a credible campaign in losing to Christie in 2009. It’s possible the political establishment will have sunk the state/country even further into the mire by 2017 and will relish the presence of a Bergen County cowboy.

Negatives: It’s also possible the Tea Party will have utterly worn out its 15 minutes over the course of the next three plus years, an outcome that could entangle Lonegan.

Pluses: Unlike others lumped up on this list over past losses or because of organizational baggage, the movement conservative has resisted a statewide run in recent years as he waits for his moment. A hard campaigner, he won his storied 2009 Senate race running against the party establishment.

Pluses: He’s hungry. He may be hungry enough having waited around for a shot at Congress or U.S. Senate without seeing an opening to finally go ahead and chuck the gubernatorial long ball in 2017.

Negatives: He’d have to sit down with Doherty and Lonegan first to figure out who does what and when.

Pluses: He’d be coming at the contest strong and with enviable momentum, having defied expectations in a scrappy and successful 2014 U.S. Senate bid.

Negatives: He’s decidedly a deliberative brand – a work horse, not a show horse. 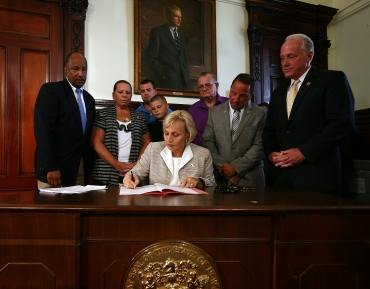