WASHINGTON, D.C. – The Marriott bar scene played out as it always does here, as old-school insiders knocked back drinks, sometimes with both hands, and youthful reporters roamed the carpet hoping to catch someone rolling around in a pool of his own vomit.

Through the increasingly abstract shapes and colors, it was hard not to observe some of the most intense rivalries in New Jersey politics right now.

The veteran congressman displayed good humored aplomb moving among the tables of sycophants, scoundrels, industry hangers-on and other assorted barflies. He never looked undignified, which is no small accomplishment in an environment in which every third person looks ready to go face down on the formica. Booker, meanwhile, was MIA, arguably not a bad thing, but given his twittering reputation  it was hard to picture him nursing a legitimate sense of moral indignation back in Newark’s South Ward.

If the field of combat were a marathon challenge, ex-Marine Fulop would have a decided advantage. But even the swanky accommodations of the Marriott afforded tavern owner’s son Healy a chance to look like everyone’s favorite avuncular presence. Healy’s main competition wasn’t actually Fulop, but Passaic County Freeholder Terry Duffy and Assemblyman Joe Cryan (D-20)

The veteran Essex County chairman wants Gill gone. She doesn’t raise money, seldom shows up at events unless it’s close to election time, and appears to have disdain for the unctuous crumbums who populate the lower recesses of the human condition (ie., anyone connected to the mechanical side of politics). Gill is also in a primary with Seton Hall Law Professor Mark Alexander, who, like the senator, was at the Marriott working the room.

Thigpen wants to give the line to veteran Assemblyman/labor leader Tom Giblin (D-34), who has built respect in every quarter of the political game. Incidentally, Passaic County Dems Chairman John Currie likewise feels less than enamored of Gill’s political brand. But heading into 2014 re-election, Essex County Executive Joe DiVincenzo doesn’t want to make an enemy of Gill, so he’s very inclined to back her for the Essex County Democratic Party line.

Complicating matters for the establishment is East Orange Mayor Bob Bowser’s decision to run again – off the line. The leader of the 34th District’s biggest city has consistently won there as a maverick, which means if he forms an alliance with Alexander, the legislative incumbents could be in for a tough primary. Some party members are irritated that they will be called on to carry Gill, whose talent as a cross-examiner is not matched by her skill as a political pavement pounder. Thigpen can’t promote Speaker Sheila Oliver to Senate without jeopardizing Essex County’s leadership standing within the Legislature – so he’s pushing sturdy soldier Giblin.

The latest manifestation of the divide in Bergen Republican politics pits veteran state Senator Gerald Cardinale (R-39) against the people who opposed Bob Yudin in last year’s chairman’s battle. Cardinale backs Auth to fill the seat currently occupied by indicted Assemblyman Robert Schroeder, the most toxic person in Bergen politics right now. The senator’s political enemy, former Assemblyman Rob Hermansen, is fighting for a place on Cardinale’s ticket. His difficulty, though, is the presence of Karen Mastriano, a former Bergen County clerk of the freeholder board and Assemblywoman Holly Schepisi’s preferred candidate over Hermansen.

Veteran Palisades Park Dems Chairman Mike Pollotta wants Kim in the Assembly. Huttle’s running mate, Assemblyman Gordon Johnson (D-37), appeared comfortable enough to be on the chamber trip, exhibiting no signs of cracking up under the pressure of Kim’s play for 37th District Korean-American support. Huttle, meanwhile, was back in Bergen hitting the phone to county committee members, according to one bloodshot source at the bar.

Steve Sweeney versus the Assembly

As payback for Ray Pocino supporting Gov. Chris Christie, the senate president wants to slap around the Laborers with a Project Labor Agreement (PLA) bill that already has the lower house cringing. They’ll back the bill, a source told PolitickerNJ.com, but only if the lower house exacts several protective amendments. Observing Democrats cannibalizing each other over support owned by the governor, Christie allies were howling.

Intent on making the most of Christie coattails, the GOP assembly minority leader was regaling barflies with stories of swinging party control and becoming the next speaker, ribbing a grinning Speaker Oliver in the process. 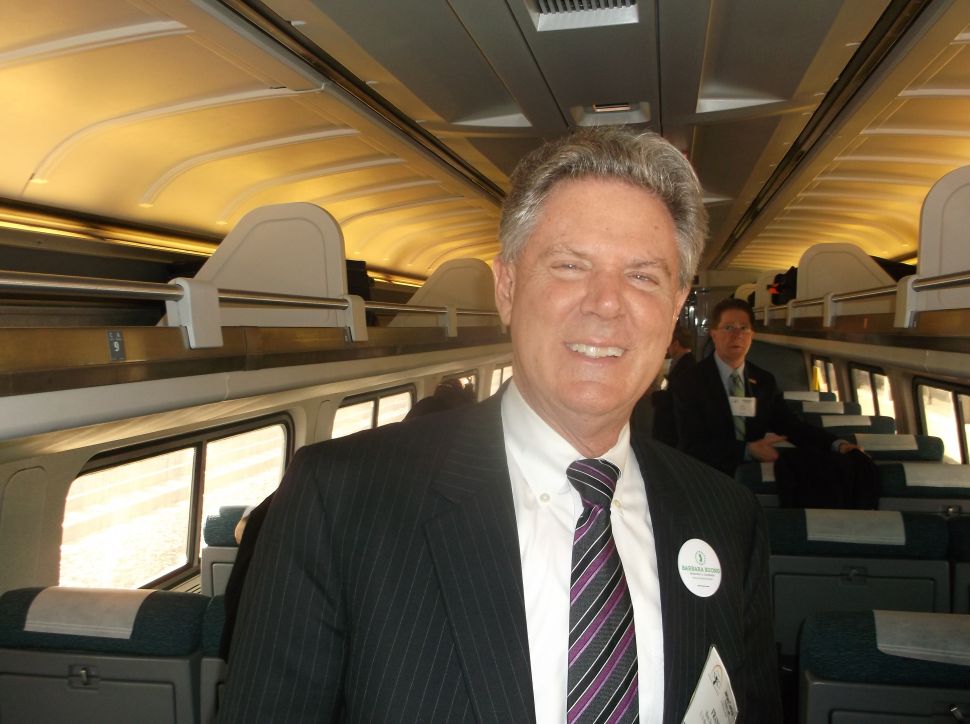