Running for re-election in a battleground district, the incumbent Democratic senator stood on a stage festooned with balloons in the vast brick and polished wood interior of the Cosmopolitan this evening and swapped out Milam for Andrezejcak.

“I am announcing my retirement,” Milam said. “It was a great honor to be able to serve.”

There were a few gasps of disappointment in the crowd.

Albano (D-1) next stepped to the microphone.

“I promised I would not let myself get emotional about tonight,” Albano said. “It is the proudest thing I have ever done. But I tell you, you people need to be proud because you have the best legislative team in the State of New Jersey.”

Then Van Drew turned everyone’s attention to a suspended TV monitor and the story of Sgt. Andrezejcak, a two-term Iraq War veteran.

“Robert Andrezejcak is just an average South Jerseyan who fought for us and protected us and he went to Iraq,” Van Drew said.

In a raid on a building in the Iraq War, while wearing night vision goggles, the candidate jumped and shattered his leg.

“He kept serving the United States of America,” Van Drew said. “Through excruciating pain, he made it back and he kept serving all of us.”

The sergeant pleaded to go back into the warzone, and did, sustaining another terrible wound.

This time his leg was blown off.

“I ask you to welcome this man, this American hero, this New Jersey hero, this recipient of the Bronze Star and the Purple Heart and our next Assemblyman in the First Legislative District…”

His and Albano’s new running mate stepped to the microphone.

“I will fight for the district as hard as I fought for this country,” Andrezejcak said to sustained applause.

Milam’s retirement was effective immediately. His replacement will assume the oath of office in the coming weeks so that he may run for the seat as an incumbent assemblyman.

Made public in a big room jammed with supporters, the ticket scramble came eight months before Election Day in one of the most closely watched general election districts in the state this year.

The GOP is expected to field a team of challengers consisting of state Senate candidate businesswoman Susan Adelizzi-Schmidt and running mates Kristine Gabor and Sam Fiocchi, their chances arguably improved by popular Gov. Chris Christie at the top of their ticket.

The senator and his running mates kept this secret for a week.

The broad boulevard optics of this Cumberland County town of factory ruins, paintball stores, car lots and the ravages of a local cemetery, coupled with the impending drama of the LD 1 contest, had more than a few people buzzing about Van Drew leaving.

But it wasn’t true.

Only Milam was going, to focus on his family business, he told the crowd.

“The only jobs Matt Milam knows about are the ones he’s been providing for the people of this district,” said the senator, to what he said were rumors of Milam departing for a public position.

Before and after the event, Republicans would marvel at Van Drew’s ability to keep the news quiet until the moment his team stood onstage this evening and proclaimed their plans. They also felt the senator had deviously disguised a loss – a tested ticket-mate gone – as a win – the pickup of an honorable replacement.

“Maybe Van Drew is announcing that South Jersey is seceding and he is the new emperor,” a Republican harrumphed off the record when told of the imitation marble column appointments in the beautiful new restaurant on the south side of town.

In such an atmosphere, the Van Drew announcement opted for more drama – not less.

A ticker tape of the candidates’ names ran across suspended TV sets at the bar in the lead-up.

The team entered to the Rocky score.

“We play it every time,” Van Drew explained.

“Are we going to fight to make this state better?” Van Drew yelled at the finish.

No less diminished for the GOP was Albano’s much publicized traffic stop last year, an issue they intend to keep in the public eye, sources said, regardless of the presence of a war hero on Van Drew’s ticket. 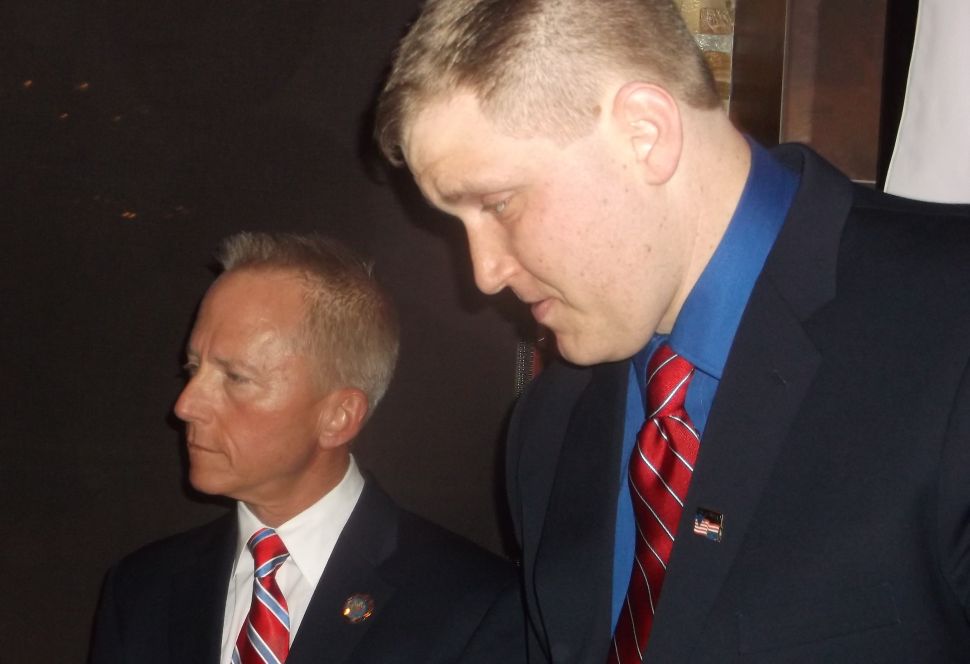