New Jerseyans evidently prefer presidents who served in their own lifetimes as their favorites, opting for a what have you done for me lately standard rather than foundational significance, according to this morning’s President’s Day Monmouth University/Asbury Park Press Poll.

President Bill Clinton is New Jerseyans’ (21%) favorite, according to the poll, and has held steady compared to a poll taken three years ago when 22% of New Jerseyans named him as their favorite president.  President Ronald Reagan has slipped from the top spot (24%) in 2010 to number two (16%) this year.

President Barack Obama increased his share of the Garden State “vote” for best president from 7% three years ago to 14% today.

Coming in fourth is some guy named Lincoln, arguably considerably wind assisted by Hollywood’s screen treatment of him just last year. According to the movie, Lincoln was president at a time before anyone in this epoch was born. He received 12%, up from 7% in 2010.

Beset perhaps by a combination of illiteracy, Tea Party backlash, a lack of interest in history and their dearth of YouTube hits, Franklin D. Roosevelt and George Washington slugged it out between themselves for sixth place, each garnering 4% of the vote, according to the poll.

Neither one showed up in the poll.

They didn’t care either that President James Garfield spent his final hours on this earth in New Jersey.

Nowhere to be found.

The Presidents Day holiday was first established by Congress in 1879 as “Washington’s Birthday,” which is still its official name.

Among just Republican state residents, Ronald Reagan is the clear favorite (38%) with Lincoln (15%) a distant second.  Among Democrats, Clinton (33%) is tops with Obama (26%) making a strong second place showing. Among independents, Clinton (20%) just edges out Reagan (17%).

“Three years ago, Ronald Reagan garnered the most support of any president in our poll, but he seems to have lost some of that support to the nation’s first Republican president, Abraham Lincoln,” said Patrick Murray, director of the Monmouth University Polling Institute.

About 1-in-10 New Jerseyans (11%) report that, as a child, he or she wanted to be president when they grew up.  Men (16%) are more likely than women (5%) to have harbored that dream, but there is little gender distinction when it comes to their own children.  Just under half of New Jerseyans say they would like to see a son (46%) or daughter (47%) grow up to be president.  However, men are more likely to encourage that ambition in either a son (53%) or daughter (54%) than are women – just 39% would like to see either a son or daughter become president.

“Perhaps the gender disparity in these results is not because women think they are not up to the job of president, but because they wouldn’t wish the job on anyone – male or female,” said Murray.

Monmouth University/Asbury Park Press Poll pollsters conducted the poll by telephone, sampling 803 New Jersey adults from Feb. 6 to 10.  This sample has a margin of error of + 3.5 percent.  The poll was conducted by the Monmouth University Polling Institute and originally published by the Asbury Park Press and its sister publications (Courier-Post, Courier News, Daily Journal, Daily Record, and Home News Tribune). 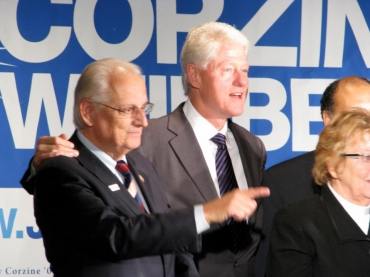