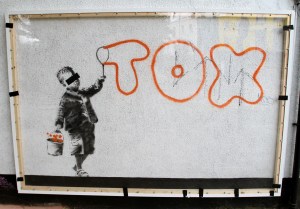 Politicians and Banksy fans have rallied together to try and stop the sale of a a piece by the artist, Slave Labour, that recently disappeared from a wall in North London. The piece is expected to sell for up to $700,000 tomorrow at a Miami auction house, whose owner assures the public that the piece has good provenance and was not in fact stolen.

Then in The Guardian‘s update on the story, there’s this:

“I’m not buying the argument that because Banksy put a piece in public it gives a person the right to steal and resell it,” [a friend of Banksy’s] said. “When he is on the street he is giving his work to the public to enjoy for a day, a month, a year or more. His position has been that if you take his work out of its context it’s not his work any more, it’s no longer a Banksy.”

This is just his opinion, though. If Banksy really doesn’t want it sold, then why doesn’t he just disown the work? You may remember that Cady Noland recently did this with a piece of hers, Cowboys Milking (1990), that was set to sell at Sotheby’s. The seller, Marc Jancou, sued her for doing this and lost. (And it’s not as though Banksy is much more reclusive than Ms. Noland.)

We’d like to take this moment to remind you that Banksy is famous for fucking with everyone. That is all.