In a column widely praised for its level of detail and analysis, NJTV’s dean of the New Jersey Press Corps deflated the Peter Shapiro storyline as it pertains to Barbara Buono.

The Morris County Freeholder has a coalition of GOP establishment support behind her as she attempts to succeed Joan Bramhall as county clerk.

The mayor of Union City built seven schools in ten years, capitalizing on great relationships with governors from both parties, including Jim McGreevey and Chris Christie, in the ultimate demonstration of political expertise for a worthy end.

After ten and a half years, today was his last day in the Senate Democratic Office. On Monday, Butkowski will begin a new job at Rutgers University, handling communications for the University Human Resources Department. “It has been a privilege and an honor to work with all of you over the course of my career with the Senate Democratic Majority,” Butkowski said in email to friends and colleagues. “Thanks again for all the memories, and all that you do on behalf of the people of the State of New Jersey.”

Present in the Dallas PD basement in 1963 for Jack Ruby’s point-blank killing of JFK assassin Lee Harvey Oswald, the Quinnipiac University pollster and former Herald Tribune reporter plans to release his eyewitness to history later this year on the 50th anniversary of the event.

The Bronstein and Weaver political consultant and campaign operative won a national Campaigns and Elections Reed Award Friday in the case study category for his work on the 2012 Montclair municipal elections.

The governor raised $500,000 in one night and demonstrated ease going to a prime Democratic Party ally in state Sen. Brian P. Stack (D-33) in a gubernatorial election year. Stack almost endorsed Christie four years ago, then backed incumbent Democrat Jon Corzine in what many considered a surprise move by the 10,000-vote generator. Having already crossed the Rubicon with the Republican governor by calling him the greatest ever, Stack on Thursday urged New Jerseyans to rally around the GOP incumbent. But Christie, who’s used to controlling the narrative, could not escape the entanglement of The Star-Ledger’s AshBritt  headlines, which needled Christie on his supposed strongpoint: Hurricane Sandy reconstruction. Republicans bashed the story, and pointed out that Connecticut – which has a Democratic governor – bid for AshBritt’s services. But the appearance of Christie’s political fundraising allies Ed Rogers and former Mississippi Governor Haley Barbour – who work for the D.C. lobbying firm employed by AshBritt – making money from Sandy isn’t the narrative Christie wants.

Squirming for two weeks under Salomon Melgen headlines, the U.S. senator now faces the prospect of a Senate Ethics Committee examination into his connection to the doctor/donor who allegedly provided Menendez a trip to the Dominican Republic to frolic with prostitutes. Menendez only later paid his airfare after ensuing scrutiny, but now he faces new reports that he pressed the U.S. government to help Melgen’s company. He simply can’t get out from under the story.

Threatening a subpoena, Budget Chairman Assemblyman Vincent Prieto (D-32) this week slapped Christie’s treasurer for failing to appear before his committee to answer questions about the AshBritt contract.

The leading contender to challenge Senate President Steve Sweeney (D-3), Trunk resigned suddenly from the Comptroller’s Office amid Democrats’ demand for an investigation. A spokesman for Comptroller Matt Boxer said Boxer was uncomfortable with any employee exploring a candidacy while working for his office.

Investigators with the Essex County Prosecutor’s Office this week arrested the former Newark City Hall aide as part of an investigation into kickbacks at City Hall – an investigation that does not include Mayor Cory Booker as a target, according to a report by the Star-Ledger. 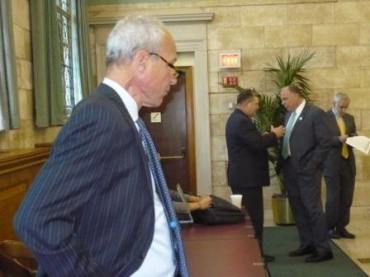