Last night’s fundraiser at the home of Facebook founder Mark Zuckerberg was far from the geekfest one might expect at the home of one of the world’s wealthiest techies.

In attendance at the Palo Alto event in honor of Gov. Chris Christie were several big names from the business and technology worlds as well as some high flyers from high finance.

Among the dignitaries at the $3,800 per head fundraiser  were former Secretary of State and possible 2016 presidential contender Condoleeza Rice; Marc Andreessen, a co-founder and general partner of the venture capital firm, Andreessen Horowitz and an early investor in Twitter; Kate Biber, who was chief counsel for Romney for President; Marc Beniof, chairman and CEO of salesforce.com; Reid Hoffman, a partner at Greylock, and co-founder and executive chairman at LinkedIn; John Doerr, general partner at Kleiner Perkins Caufield & Byers; Dr. Griff Harsh IV, husband of Hewlett Packard CEO Meg Whitman and a neurosurgeon at Stanford; Ron Conway, an angel investor in start-ups including Google, Facebook, Zappos and Twitter; and Diane “Dede” Wilsey, a San Francisco philanthropist, the widow of prominent San Francisco businessman Al Wilsey.

The fundraiser – the first ever held by Zuckerberg, did not sit well with Democrats and women’s groups, a couple of dozen of whom gathered outside the Facebook founder’s home to protest. Among the complaints from the protesters was Christie’s stance on women’s health.  The governor slashed $7.5 million in Planned Parenthood funding from his budget two years ago, leading to the anti-women claims.

According to the Huffington Post, Zuckerberg did not comment on the protest, but issued a statement lauding Christie for his efforts on education.

“Mark and Priscilla have worked closely with Governor Christie on education reform in the Newark school system,” The statement read. “They admire his leadership on education reform and other issues and look forward to continuing their important work together on behalf of Newark’s school children.”

As for how much money the governor raised, his camp is not talking. 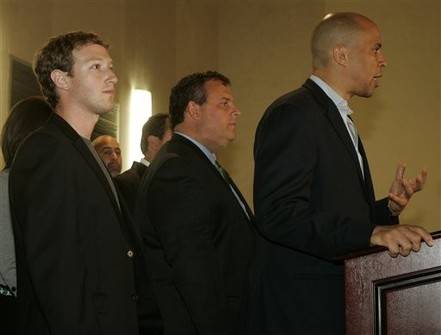