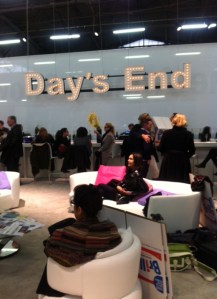 Here’s a fun one, folks. See that snappy light piece in the photo that accompanies this post, the photo that shows all those happy people at a champagne bar and that makes you wish you were at the Armory Show socializing with rich people and artists instead of sitting at your desk? The light piece that says “Day’s End”? It’s an artwork by Peter Liversidge, who makes conceptual artworks, all of them based on typewritten proposals. If you look closely on the wall adjacent to the big light piece, you’ll see his little proposal in a frame, addressed to Armory Show director Noah Horowitz. There’s an odd little bit in it that we noticed because we’re editors. “Day’s End,” he writes, refers to the title of a work by the late great artist Gordon Matta-Clark. Mr. Liversidge spells it Matter-Clark. But we are not here to nitpick; nitpicking is unseemly. It is, well, it’s the very error that makes the artwork…special. And we should not blame Mr. Liversidge for misspelling the name of a famous American artist. Mr. Liversidge was, after all, born in England. 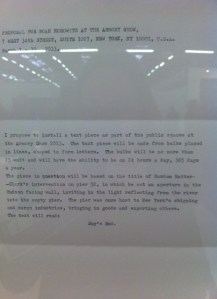