When the smoke cleared at a movie theater in Aurora, Colo., in the wee hours of a Friday morning last July, 12 people were dead, 58 were injured and Mayor Michael Bloomberg was in New York, readying an assault of his own.

The campaign that Mr. Bloomberg and his “gun team” came up with in the hours and days after Aurora involved carpet-bombing Washington with millions from the mayor’s immense fortune and a media blitz that would be deployed following the next massacre.

“He was so frustrated by the lack of conversation around this issue … that he decided to force the conversation himself,” Howard Wolfson, deputy mayor for government affairs and communications, told Politicker.

By 5 a.m., just a few hours after the shooting, Mr. Bloomberg was emailing members of his staff, preparing a media offensive against President Barack Obama, Mitt Romney and what he perceived as their campaigns’ silence on gun control.

At 8 that morning, the mayor came out swinging during his regular appearance on WOR’s John Gambling Show.

“Maybe it’s time that the two people who want to be president of the United States stand up and tell us what they are going to do about it, because this is obviously a problem across the country,” Mr. Bloomberg said. “No matter where you stand on the Second Amendment, no matter where you stand on guns, we have a right to hear from both of them concretely, not just in generalities. Specifically, what are they going to do about guns?”

The moment had come—in fact, it had come and gone several times. The next time a tragedy like Aurora went down, he would be ready.

In his years building the business empire that made him a billionaire, Mr. Bloomberg developed a unique fluency for numbers and learned to view the world through a statistical prism. Multiple people close to Mr. Bloomberg have said that the figure he’s most preoccupied with is the number people in his city who die of preventable causes. This obsession with bringing down the death rate has driven the mayor’s notorious crusades against smoking and sugar, and according to John Feinblatt, the mayor’s chief adviser, it was a major factor behind his decision to step into the national gun control debate several years ago.

“This was part head, part heart. The head part was, he had been extremely successful, with [NYPD Commissioner Ray] Kelly and others, in driving crime down during the first term, but I think there was a recognition that, to continue to drive it down, one had to do something about guns. I think that the mayor is always driven by data, and there’s one data point that’s sort of hard to miss, which is that 85 percent of the crime guns in New York City come from out of state, so you knew that to really address this, you had to address this nationally,” explained Mr. Feinblatt. “I think the heart part was … every mayor gets that call at 2 in the morning and has to arrive at the emergency room and break the news that’s going to break somebody’s heart … You see gun violence up close [and] personally in a way that federal officials just don’t.”

Mr. Bloomberg’s first national initiative was called Mayors Against Illegal Guns, a group he co-founded with Boston Mayor Tom Menino in 2006 to address what Mr. Menino described at the time as “a crisis on the streets of our nation.” In the years that followed, the group grew from 15 mayors who attended the inaugural summit at Gracie Mansion to more than 900. They shared gun control strategies and launched a PR campaign that included two Super Bowl ads.

It took the Aurora shooting to propel Mr. Bloomberg to kick those efforts into high gear. Both Mr. Wolfson and Mr. Feinblatt said the shooting was the event that defined the mayor’s current approach to gun violence. “It all flows immediately from that moment,” Mr. Feinblatt said.

Mr. Bloomberg’s anti-gun battle plan would be driven by data and paid for largely with the mayor’s vast personal fortune, allowing him to fuel the national conversation on gun control. Mr. Wolfson said this strategy “didn’t really crystallize until after Aurora” and stemmed from the mayor’s “real disappointment with the lack of focus last fall on this issue and the sense that the NRA had the field to itself.”

On December 14, 21 weeks after the Aurora shooting, Adam Lanza opened fire on an elementary school in Newtown, Conn., killing 26 children and teachers. This time, Mr. Bloomberg was ready.

Three days later, he appeared at City Hall, flanked by more than 30 people who had been touched by gun violence, to unveil the “Demand a Plan” initiative his aides had been working on since Aurora. It included three “common sense public safety measures” he called on Congress to enact: requiring criminal background checks for all gun buyers, banning assault weapons and high-capacity magazines, and making gun trafficking a federal crime. Work on the “Demand a Plan” website had begun within 72 hours of the Aurora shootings.

Along with pushing the conversation on gun control—on the cover of Time magazine, and in numerous other media outlets—the mayor’s initiatives also shaped the White House’s own response. Mayor Bloomberg and his “gun team,” which has been working “seven days a week” since the killings in Connecticut, according to Mr. Feinblatt, have made multiple trips to Washington to speak with lawmakers and provide both polling and logistical data on the feasibility of various gun control policies.

In January, the president sent a plan to Congress that included all three of the key elements from Mr. Bloomberg’s plan.

With Mayors Against Illegal Guns functioning as the propaganda arm of Mr. Bloomberg’s anti-gun movement, its military arm is Independence USA PAC, a political action committee that the mayor created in October and tapped Mr. Wolfson to lead. The so-called super PAC is dedicated to electing politicians who support his gun control proposals—and defeating those who don’t.

Using approximately $10 million of the mayor’s money, the PAC saw three of the six candidates it backed in November House races go on to win; the impact of the mayor’s money on those races was hard to gauge, however, given the relatively small amount of time between the PAC’s October launch and election day. Even with a mixed record of success, Mr. Bloomberg’s election spending put Washington on notice, adding muscle to his other anti-gun violence efforts.

“Putting the PAC together with his, what I’ll [call] purchasing power, it absolutely keeps him on everyone’s radar, you know, no different than a Sheldon Adelson,” Staten Island Congressman Michael Grimm told us during a December conversation about Mr. Bloomberg’s stature in Washington. “This is a guy that by virtue—just by the virtue of his financial means, is a player whether you like it or not. I mean he is because he has the clout to be that.”

Ms. Kelly was supported by approximately $2.5 million in ads paid for by Independence USA that, according to Mr. Wolfson, “helped make the race a referendum on guns.” The New York Times, MSNBC and others all called the race a “win for Bloomberg.”

“We elected somebody who’s going to be a real champion on this issue. There’s going to be a vote in this House. She will be a reliable—not just a reliable vote, but a champion for the president’s proposals, and that’s really important,” said Mr. Wolfson of Ms. Kelly’s victory.

In many ways, the anti-gun violence strategy hatched by the mayor and his advisers after Aurora was uniquely Bloombergian. Both of his gun control initiatives are extraordinarily well-financed and, as a result, are backed by top political consultants. Demand a Plan—which was redubbed Demand Action this month after the president revealed his Bloomberg-friendly gun control plan—is also driven by data, with all of its legislative recommendations backed by extensive polling and research.

Whether or not Congress passes the president’s gun control plan, Mr. Wolfson described the mayor as “in this for the long haul.”

Mr. Bloomberg is currently headed into the home stretch of his 12 years in City Hall. Though he and his close aides have remained tight-lipped about his future, it seems clear he will be substantially engaged in advocacy on the issues closest to his heart, which, in addition to gun control, include immigration reform, gay rights, climate change and education reform. Mr. Bloomberg won’t say where or how he will strike next, but his gun control initiative provides a blueprint for the type of effective, expensive approach he could bring to this post-mayoral political activity.

“Look, the mayor has an enormous platform and will continue to have influence on the issues he cares about,” Mr. Wolfson said of the mayor’s future plans. “He spent roughly 10 million dollars last November. He described that as sticking his toe in the .” 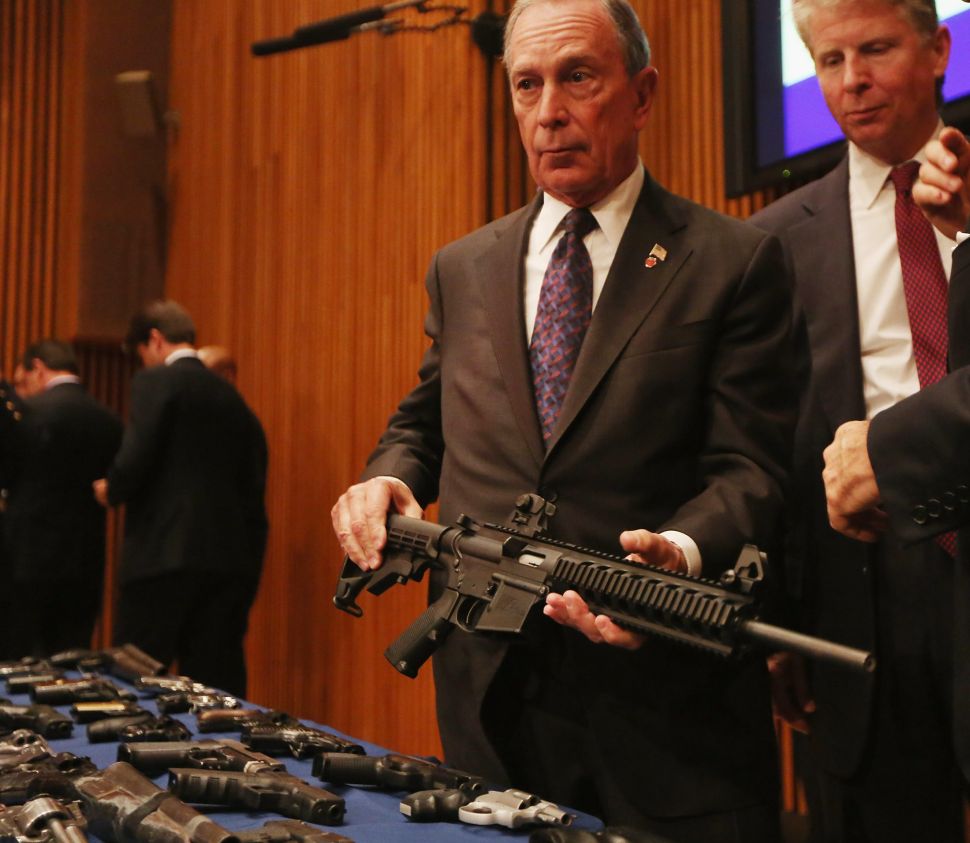