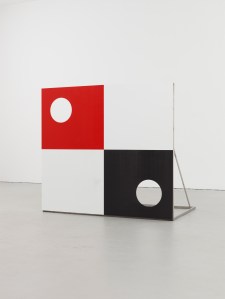 It’s the rare deconstruction that remembers to deconstruct itself. But you can see how it works in Alan Uglow’s 2010 T-3. (The English-born painter died in 2011.) On a flat, bright-white field, picture a figure like a cross with red, silver and black bars, the upper and lower two slightly offset to create a cantilevered feeling of expansive stillness. Borders are exact—the white field, if you look closely, is divided by sharp edges of paint into four symmetrical pieces—but the bars of the figure remain thick enough to have their own substance. A subversion of the inhuman infinitudes of geometry is at the same time an expression of faith in their real meaning.

In Standard #8 (Blue), the white canvas is bordered by four blue lines and divided by another, like a window sash, across the middle. Two off-white shadow lines divide each of the resulting halves in half; four blue notches project into the four outside corners, and four shadow notches into the middle four; and the canvas sits on two small wooden blocks. Blue-on-white, white-on-white and three-dimensional wooden stripes are thus all set on par, making for a small humanist joke with enormous ramifications. By reducing the separate pretensions of its own given terms, the painting makes itself open-ended, and therefore actually, if quietly, universal.

Portrait of a Standard (Blue), a monochromatic screen-printed photograph of Standard #8 set at an angle, continues the joke, turning negative positive and side to front: the white edge of the canvas is as brightly distinct as the painted stripe it separates from a printed shadow. The flat trapezoid of the tilted canvas suggests that imperfection—or even motion, if you read the tipped-forward parallelogram crossbar of T-3 as a rectangle going somewhere—is only a trick of perspective. It’s an optimistic philosophy. If it doesn’t really alter what it seems to alter, an alteration must be an addition. (Through March 23, 2013)