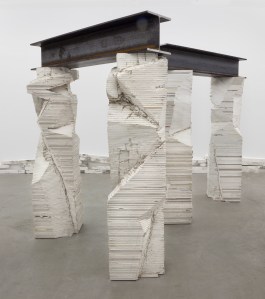 To make Weight Bearing II, the first of her four post-and-lintel arches currently dominating Laurel Gitlen’s beautiful new space on Norfolk Street, Allyson Vieira began with two stacks of 16-inch drywall squares, a ready-made material in a standard dimension. Four three-inch screws driven through each square transform the stacks into columns 128 levels high, or about as tall as the artist. A nude model holding a weight above her head, elegant figure studies painted with squid ink, reddish chalk guidelines marked at angles across the columns’ mostly white sides and violent notches cut from the corners—exposing dusty mountainscapes, pastry-like layers and motionless dependent screws like fossils in sediment—make the columns into geometric caryatids, ready to collaborate in bearing a single steel I-beam placed atop both their heads.

The struggle between primally universal form and particular organic realization, between ziggurat going up and excavation going down, between history as an overbearing monolith and time as an accumulation of present moments, is clear, but it’s hard to tell which side is which. It’s unsettling to see the unique complexity of the human form reduced to a load-bearing pillar, but isn’t that appearance of human form really just a mutilation of the Sheetrock’s own square perfection? The steel beam, with its precise and standardized shape, is surely a more momentous human accomplishment than anything an artist or architect may choose to do with it.

In the gallery’s chapel-like back room, encapsulating the mystery like a cult image, is Hygra Physis, a meticulously winged phallus and a small octopus, both cast in bronze, either fighting or preparing to mate. (Through March 24, 2013)