The elder Baraka, former poet laureate of New Jersey, issued an email blast this morning to an enormous list of friends and contacts worldwide seeking financial donations to his son’s mayoral campaign.

To date, Baraka has lagged on the financial front, reporting just $4,000 in the bank earlier this year.

“It is a monumental task we are waging,” Amiri Baraka wrote. “It is for the May 2014 Newark, NJ Mayoral election. You can help us with the BARAKA FOR MAYOR campaign with $2,600 for Ras’ campaign, or $10,400 for TEAM BARAKA (4 Council (sic) candidates who will be named shortly). This has been a major struggle to get our second son, Ras to this point where he can meaningfully challenge the rule of the Corporate Lords and corrupt power brokers.”

Ras Baraka is the only formally announced candidate in the 2014 mayor’s race.

North Ward Councilman Anibal Ramos and former Assistant Attorney General Shavar Jeffries are soon expected to get in the race.

A political activist, Amiri Baraka was a central figure in the 1967 Newark riots.

Then-Gov. Jim McGreevey bounced Baraka as poet laureate in 2002 after the Newarker published his controversial poem on the 9/11 attack, “Somebody Blew up America.” 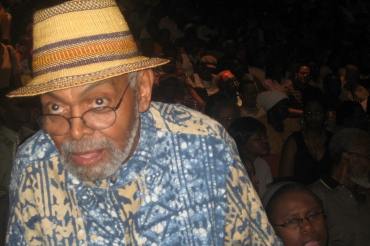