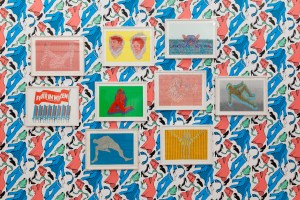 Frenetic wallpaper seems to be a thing at the art fairs this week (see Gagosian’s booth at the Armory, freakishly covered with the visage of Andy Warhol), but Gavin Brown’s Enterprise at Independent has really outdone themselves. Their booth is covered in wallpaper by Thomas Bayrle featuring articles of discarded clothing cartoonishly flying through the air. If you go to the far corner of the booth, you’ll see the disrobing man and woman responsible for all this chaos.

Asked if the wallpaper was for sale, Gavin Brown deadpanned, “Everything’s for sale. Isn’t that the point?”

(The wallpaper was on reserve.)

Elsewhere in the booth is Mr. Bayrle’s “sex map portfolio,” a series of images of different sexual positions that vaguely resemble those old optical illusion drawings that had a secret image that jumped out if you stared at them long enough.  Also on view were glass panels by Kerstin Brätsch that contained messages like “Tongue kiss the other” and “I’ll start collecting too.” Mr. Brown called it the “part two” of the gallery’s exhibition of Mr. Bayrle and Ms. Brätsch back in September.

“Everything is happening this week,” said Mr. Brown, who is also holding an exhibition for Steven Shearer at 229 Lenox Avenue in Harlem, which runs March 6-9 only. “It’s nice to take part, though I prefer this physical environment. Lots of light .” His booth was positioned by a window and he looked out it, past one of Ms. Brätsch’s panels, and said, “Oh my God what is going on out there?” It was a massive construction site with cranes and utility vehicles and men in hard hats shouting at each other in the rain and sleet. Mr. Brown inspected the pandemonium for a moment and then kind of exhaled and said the word “art,” as if reminding himself of the task at hand, and then got back to business.