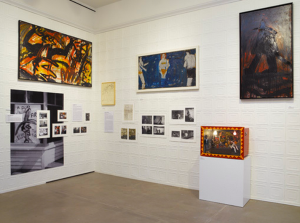 Yesterday, the International Association of Art Critics announced the winners of its awards for the best exhibitions of the past year and the list contains both blockbuster names and some surprises. The Best Show in a Commercial Gallery, Best Monographic Museum Show and Best Thematic Museum Show categories are subdivided into New York and national groups. Here’s a breakdown of the New York recipients:

Pace Gallery and Acquavella Galleries took first and second place, respectively, for “Happenings: New York 1958-1963” and “George Braque, Pioneer of Modernism,” in the commercial gallery category, while the MoMA and the Met garnered the first and second slots for Best Monographic Museum award for their mega de Kooning and Matisse shows. The Met also earned a second-place thematic show prize for “Faking It: Manipulated Photography Before Photoshop” while the first-place award went to the Brooklyn Museum for its Lucy R. Lippard–inspired exhibition. Notably, MOMA PS1, along with the Hammer, also snagged first place in the Best Thematic Museum Show awards in the national division (for its critically-acclaimed “Now Dig This! Art and Black Los Angeles 1960-1980”). Nearly every other national award in these categories went to institutions in Los Angeles.

The Park Avenue Armory swept the Best Project in a Public Space category, taking home first and second place for Ann Hamilton’s massive swings (“The Event of a Thread”) and Janet Cardiff and George Bures Miller’s “The Murder of Crow,” respectively. MoMA snagged the two Best Digital, Film, Performance or Video Exhibition awards for its Jack Smith and Quay Brothers shows (the former was at MoMA PS1). The awards ceremony will be held uptown at the Asia Society on April 1.