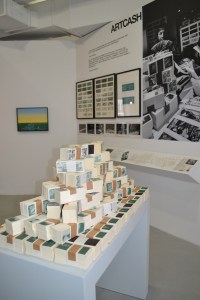 Money may be everywhere at art fairs, but it’s usually invisible; a palpable energy driving the day’s deliberations and deals. At Broadway 1602’s Independent display, however, it’s all on the table. The New York gallery’s space is largely devoted to Art Cash (1971) created by members of Experiments in Art and Technology, a non-profit organization founded by engineers Billy Klüver and Fred Waldhauer and artists Robert Rauschenberg and Robert Whitman. The group produced Art Cash for a gambling fundraising event, but the currency has recently been reappearing in fairs like the last NADA in Miami, where Bill Powers invited artists to fill his Half Gallery booth with work made from Warhol’s one dollar bills (Rauschenberg did the $12 note, Marisol made an $88 bill).

Broadway 1602 showed both stacks of the bills along with uncut editioned sheets of Art Cash signed by the artists. It was a cheeky, subversive project in its own time, and its bite is only enhanced in the context of an art fair. On opening day, a dealer at Broadway 1602 said she has sold several stacks, which cost around $1,000 to $1,200 (at the time, there was only one Marisol stack left, available for $1,500) as well as smaller sets of six notes. Try your luck winning a few during tonight’s blackjack game at 6 p.m.