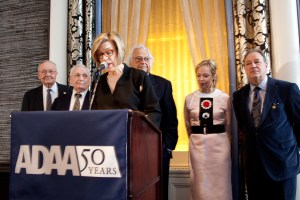 On the evening of March 3, two days before the opening of the Art Show, the Art Dealers Association of America’s annual art fair, 300 people—mostly ADAA members—gathered in the Waldorf-Astoria’s Empire Room to celebrate the organization’s 50th anniversary. The gala cocktail party was meant to take place last November, but Hurricane Sandy got in the way.

After everyone had grabbed a drink and downed some hors d’oeuvres from a lavish spread in the center of the room, there was a showing of a short film honoring the organization’s achievements. Appreciative murmurs were heard as archival photographs of dealers and artists popped up on a screen—Castelli, Emmerich. Then came Gil Edelson, the ADAA’s chief counsel since the beginning, who said of those dark, pre-ADAA days, “I don’t think people understood the contributions of art dealers. As a matter of fact, there were museums that required art dealers to use a side entrance.” To room-spanning gasps, an image of the Whitney popped up on the screen. Who knew? “There was something shady about an art dealer,” Mr. Edelson went on, and the ADAA meant to “organize the really good dealers, to promote and make known what dealers did and how important they were.” Admirable! Not so fast. Joan Washburn: “It was definitely a club for men at the beginning; there just weren’t that many dealers who were ladies.” You’ve come a long way, ladies.

The rest of the film covered the ADAA’s signal early accomplishments—a system for appraisals of artworks, processes for identifying fakes. A dinner in the ’60s honoring Robert Rauschenberg was recalled; with 200 people there, the entire art world was accounted for (how quaint!). “Now the thing is global,” came a follow-up zinger from Richard Feigen. The highlight, though, was a photograph of suave, then-young dealers Roland Augustine and Lawrence Luhring (of Luhring Augustine), which prompted the good-natured comment “Lotta hair!” from somewhere in the room.

Then came another film, this one about the ADAA’s efforts in Sandy recovery, with shots of half-submerged cars and Zach Feuer in a flannel shirt mopping up his waterlogged gallery, and tales of Mitchell Innes & Nash director Jay Gorney making the rounds of Chelsea like a post-ghosts Scrooge, bearing news that the ADAA was eager to help.

Ask the recently appointed ADAA president, Dorsey Waxter, and a previous president, Roland Augustine, about the organization’s most significant accomplishments, and they will tell you about the development of industry standards and of that appraisal service; the advancement of scholarship; the promotion of connoisseurship; the Art Show; and two initiatives Mr. Augustine threw his weight behind, lobbying for artists’ rights and a code of ethics.

But James Cohan offered another, just-as-crucial take on the ADAA’s value to members. “Art dealing is a lonely profession,” he said. “It’s nice to have colleagues.” Only a few minutes went by before his words were vindicated. The Houston dealer Kerry Inman, who is participating in the Art Show for the first time, told Mr. Cohan, whose booth has moved, “I’m in your old booth—I thought it was good luck.”