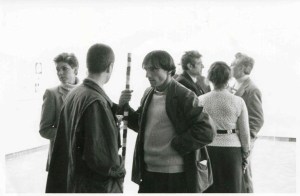 Artists Space’s Books & Talks venue, which opened in Tribeca last year, is home to a tastefully curated bookshop, has hosted numerous talks, screenings and discussions, and served as a studio for Peter Fend. Soon it will present its first fully fledged exhibition. On the evening of May 10, it opens “Documenting Cadere: 1972–1978,” which looks at the life and travels of the Polish-born artist André Cadere (1934–78), who’s best known for the thin, striped cylindrical sculptures he called Barres de Bois Rond—”round bars of wood.”

The show, which originated at Modern Art Oxford, in England, was organized by Lynda Morris, and focuses on “work [that] was often realized through public walks or provocative appearances at exhibition openings.” It will include documentation, correspondance and interviews. Here’s a bit from the tantalizing news release:

Cadere undertook actions in cities across Europe and also in New York. His first visit to New York occurred in 1975, and further trips over the following three years saw Cadere exhibit work in galleries such as David Ebony Gallery, as well as in public spaces. In both 1976 and 1978, he presented a Barre de Bois Rond at locations such as a grocery store, a Chinese restaurant, and a model agency during afternoon walks along West Broadway. During his visits to the city Cadere met and engaged in dialogues with artists, gallerists and writers including Ian Wilson, Benjamin Buchloh, Ileana Sonnabend, Lawrence Weiner, Sarah Charlesworth and Sylvère Lotringer.

The show runs through July 7.

Meanwhile, Books & Talks is showing one of the Aaron Flint Jamison pieces for Artists Space’s great show, “Frozen Lakes,” which recently got extended. You have through next Sunday, March 31, to catch it.