“All of us here today had different visions for the future of Perth Amboy last year but what unites us – a love for this city and a love for the Democratic Party – is stronger than what divides us,” Diaz said this morning at a press conference. “We are absolutely unified in our commitment to strengthening the party we all love and ensuring that our local Democratic organization survives and thrives.  Sadly, that organization cannot move forward while it is being run by a chairperson who supported a mayoral candidate who ran on the same Republican ticket as extremist gubernatorial candidate Brett Schundler and espoused right-wing views that have no place in the Democratic Party.”

That’s former Republican Delgado to whom Diaz refers. Delgado ran for Assembly with former gubernatorial candidate Schundler, voted in Republican primaries and never once voted in a Democratic primary over the past 11 years.  At the most recent Perth Amboy Democratic Organization meeting on February 25, Dominguez-Rodriguez introduced Delgado as the new legal advisor to the Party.

Dominguez-Rodriguez campaigned successfully out of Perth Amboy for sitting Middlesex County Democratic Chairman Peter Barnes, who beat the opposition in part by criticizing Woodbridge Mayor John McCormac’s (a Diaz ally) decision to walk with Christie through the streets of Woodbridge the day after Election Day 2009.

But the mayors aligned with Diaz today stayed focused on the local connection Dominguez-Rodriguez had to failed candidate Delgado.

“When the chairperson of our Democratic organization endorses a candidate who was lambasted for running a sexist campaign and then appoints the same man as legal advisor to our Democratic Organization, that does not represent the values of the Democratic Party,” said Robert McCoy, who ran for mayor in 2012.

“Misogyny has no place in public life today and yet our Party is being run by someone who sees no problem with endorsing a Republican for mayor, even after he was criticized by the state’s highest-ranking Democratic women for derogatory and sexist remarks his campaign made against Mayor Diaz. Ms. Dominguez-Rodriguez should resign, since she no longer represents what we in the Democratic Party stand for.”

Delgado’s top campaign strategist sent Mayor Wilda Diaz inappropriate emails calling her “stupid” and alleging that she was not as smart as her male counterparts in surrounding towns.

“Perth Amboy deserves a unified Democratic Party.  However, we will never have that while all of us here who ran for Mayor and garnered a collective 69% of the vote last November have to stand by while Ms. Dominguez-Rodriguez runs our municipal organization.  How can she claim to represent the city’s Democrats while endorsing Billy Delgado who had only 29% of the vote and then continue to serve as the leader of the Democratic Party?” said Miguel Morales, also a 2012 mayoral candidate.

“At some point, Ms. Dominguez-Rodriguez needs to ask herself why she continues to cling to power while every single Democratic elected official in town wants her gone,” said 2012 mayoral candidate Frank Salado.  “The mayor has asked for her to step down.  Members of the city council – Democrats all – asked her to step down.  Now every single Democrat who ran for mayor last year is asking her to step down.  When people who previously ran against each other are united in moving our Democratic Party forward the impediments against success quickly fall down.  The only hurdle left standing in the way of success is the municipal chair who supported and continues to support an opportunist who only resigned from the Republican Party to run for Mayor of Perth Amboy.  It’s time for her to explain why she is holding Perth Amboy Democrats back singlehandedly.” 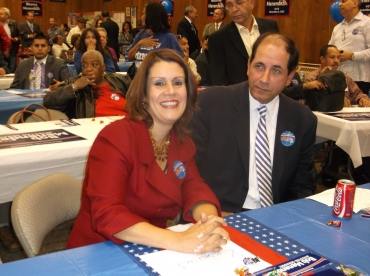