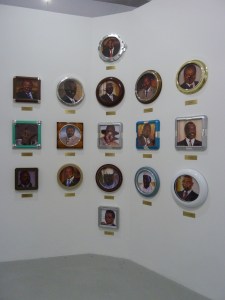 There’s a lot of art for sale in New York this Armory Week, but at least one booth is playing hard to get. At McCaffrey Fine Art, which has a booth at the Independent art fair in Chelsea, the gallery has mounted an installation by Meschac Gaba, a West African artist who will have a solo show at the Tate Modern in July. The piece is a collection of clocks with the numbers removed and the official portraits of presidents of various African countries put in their place. There’s Sharif Sheikh of Somalia, Abdoulaye Wade of Senegal, Denis Sassou Nguesso of the Republic of the Congo and about a dozen others. It comes from Fergus McCaffrey’s personal collection and, uncharacteristic for the everything-must-go atmosphere of most art fairs, it’s not for sale.

“Who are these people?” asked Martin Z. Margulies, the Miami collector who displays his holdings at the Collection at the Warehouse in Miami’s Wynwood Arts District.

“These are the presidents and dictators of African nations,” Mr. McCaffrey said.

Mr. Margulies said they would look great in his warehouse.

“I like that,” Mr. Margulies said, in the tone of a business man impressed with a hard bargainer.

Lucky for him, the work by Gary Rough on the other wall of the booth was for sale at prices ranging from $2,500 to $4,000. They were almost sold out by the end of the day.