NEWARK – Newark Mayor Cory Booker has delivered his State of the City speeches in sections.

First there were the future governor speeches – the will-the-party swap-out-Corzine-and-go-with-Cory-speeches.

Then there were the post Corzine, is-he-a-future-senator speeches – the middle period.

Tonight’s offering – Booker’s seventh – would go down as the spoken word solstice of a future senator – or at least that was the NJ-PAC aura around the mayor.

Tonight would be Booker’s first state of the city since announcing his plans to focus on the 2014 U.S. Senate seat.

Fair to call it a legacy speech?

“That’s next year,” a Booker ally told PolitickerNJ.com in the lead up to tonight’s speech.

Still, there was a definite effort to contextualize the entire Booker Administration experience.

“This is Brick City, and as I’ve said time and again we are like bricks themselves,” the mayor declared. “When we come together, there is nothing we cannot overcome.”

Riding a nice headline about his 70% local approval rating, an assessment made by an opposition poll, no less, Booker harkened back to the first year of his administration.

“What we saw was the lack of confidence in government,” said the mayor. “Newark was not only losing money but we had a chronic problem of employee absences. ..We have seen dramatic improvement in the quality of our services.”

“This was difficult,” Booker cried.

He increased affordable housing opportunities by over 100%.

“There are 1,600 more affordable housing units built over the last seven years with 400 more homes in the pipeline,” the mayor said to applause.

Newark’s population is growing, business and development are expanding the local tax base.

But there was more.

“When we add up all the hard work and sacrifice, this year Newark, New Jersey is making budget history – a true transformation,” Booker said. “Newark will break through and we will not have to apply for emergency state aid, distressed cities aid, emergency transitional state aid. We are done. And we are not going to rely on one-timers from the Port Authority. 2013 is Newark’s year of budgetary independence.”

Then there was the nagging issue of crime, a pivot point to schools.

The most important unit to fight crime is not a police unit, “But the family unit,” the mayor said.

Still he wants to hire 50 more officers, and  “When my term comes to a close we leave the next administration with a financial projection to add hundreds of police officers over the next four years,” Booker said to applause

But… he also wants a citizens police oversight committee.

Booker gave a big penultimate fist bump to business at the finale.

“There are 481 days left in my term,” Booker said. “I will not stop, I will not yield, I will criss-cross this land, CEO to CEO, philanthropist to philanthropist. By this time next year we will have new jobs and new companies to announce.”

Then he finished with a poetic flourish.

Perhaps in expectation of his departure, gone were the excessive optics of local Cory hate, replaced by audience back chatter surrounding the ambitions of three local men strutting would-be mayoral mojo.

Baraka indeed refrained from indulging in polite pitter patter approval of Booker’s speech, but throughout wore an expression more of repose than contempt.

A local poll reported on last month by the Star-Ledger put Jeffries dead last, trailing badly in a three-way with Ramos and Baraka.

A Booker source acknowledged jokingly that Booker scrapped his early version of the state of the city after sitting in the crowd for DiVincenzo’s well-received state of the county. But Booker’s amped up effort to have department heads take individual bows echoed the showmanship of the down in front DiVincenzo.

At least one source read the emphasis on executive ability as less a victory lap in preparation for a senate run, instead seeking out yet another stage in the political life of the upwardly mobile mayor.

“This wasn’t about the U.S. Senate,” said the source. “He wants to run for president, so he wants to make sure we know he can run stuff. This was his presidential speech.” 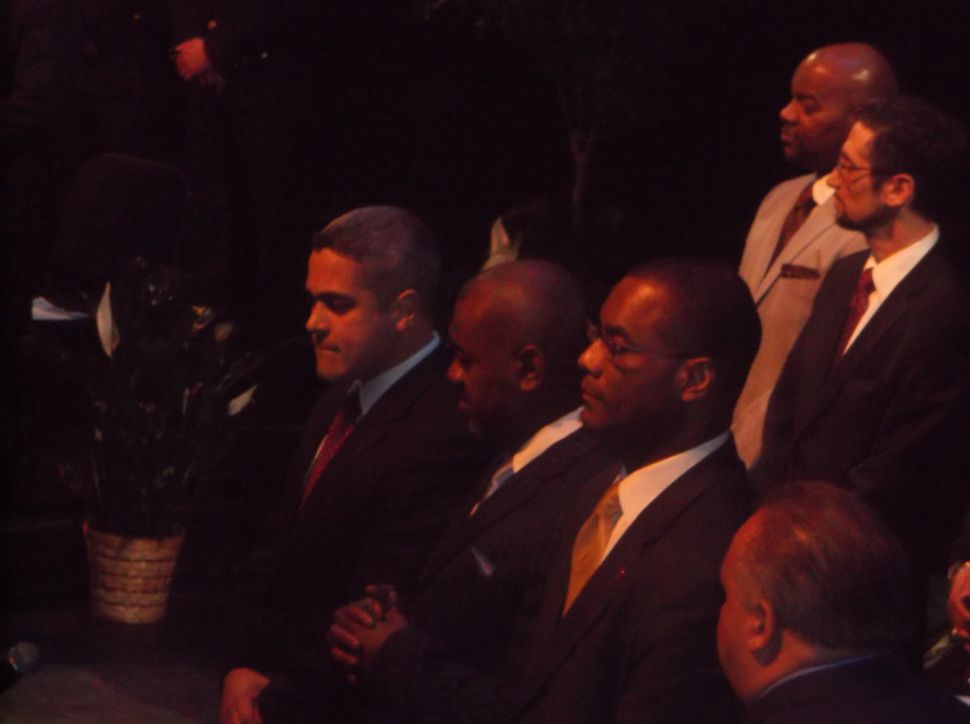