NEWARK – The rock star who would have been governor, Mayor Cory Booker, strode the sunlit streets of the Ironbound with Democratic gubernatorial candidate state Sen. Barbara Buono (D-18), the little known Middlesex County legislator who opted for a showdown with Gov. Chris Christie.

A barrage of cameras angled upward to chronicle the descent of Booker and Buono down the steps of the offices of Perez, Perez and Perez and their ramble westward up Ferry Street.

“I’ll raise money for her, I’ll stump the state for her,” Booker told reporters in his favorite local diner moments after schmoozing with diners crammed together in the booths.

“You’ve got to get me on Oprah’s couch,” Buono cracked.

“I will try to get her on Oprah’s couch,” the mayor said.

Asked if he was awed by Buono’s courage to run against Christie (who leads Buono by as many as 40 points in some polls), Booker said, “I was awed by her consistent courage” on the issues.

“The distance is going to narrow,” the mayor promised, referring to the gap between Christie and Buono, who made sure to ask reporters to get down the part of Booker raising money with the strong implication that she will need it

There’s been a lot of back buzz about Democrats afraid of crossing Christie.

“Terrified of him,” said an Ironbound source at the edges of the Booker/Buono walk.

The governor’s the former U.S. Attorney who went on a pol flattening spree for almost a decade, and many elected remain jittery and eager to trot out the latest poll numbers that show Christie flattening Buono as an excuse for staying on the sidelines.

Fundraising toward a run for U.S. Senate, Booker repeatedly claimed he’s all in with Buono.

He rattled off the issues they share: marriage equality, earned income tax credit for working families, funding for women’s healthcare.

There was a foundational issue absent from that litany, and Star-Ledger reporter David Giambusso pointed it out: Booker and Christie both approve of the Opportunity Scholarship Act, which sets up a pilot program for school vouchers.

Booker quickly pointed out that he and Buono share the same priorities for funding education.

Booker made his remarks to a gaggle of reporters pressed up against the booths of the Ironbound eatery, as sources in text messages described the back story involving tomorrow’s Essex County rally for Buono, which Booker won’t attend.

Essex County Executive Joe DiVincenzo is the most powerful visible elected Democrat who can’t shake the undercurrent of voices saying he wants his old friend Christie to win – or at least believes he can’t lose.

He won’t be at the rally for Buono.

“We wanted him to have his own event with the senator,” said Mo Butler, Booker’s chief-of-staff.

An Essex source said DiVincenzo and Booker won’t go in separate directions in the lead up to 2014, when the Senate seat Booker seeks is up and when the county executive will run for re-election, hence the mayor’s decision to campaign with Buono on his own rather than at an event where DiVincenzo will be conspicuously absent on a stage filled with county Democrats. Two absentees are stronger than one.

But today, he stood with Buono.

“I was born in this city,” said the senator. “This governor has done nothing for the city. People feel disenfranchised.” 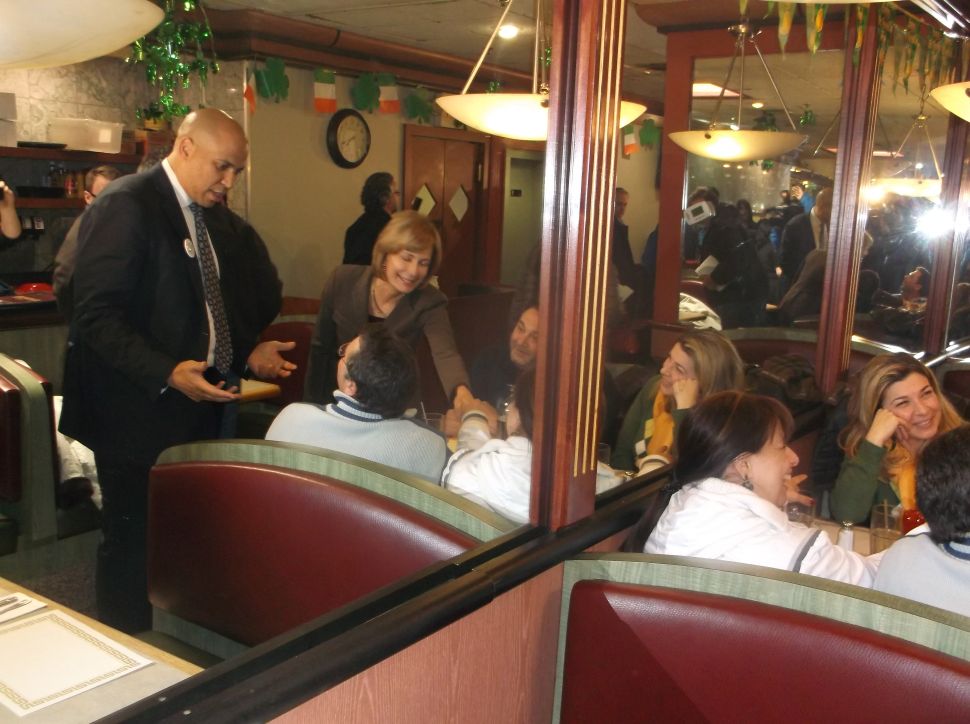