In an unprecedented move, the Newark Schools Advisory Board tonight voted against approval of a budget submitted by state-appointed Superintendent Cami Anderson.

The board voiced its dissatisfaction with the way the budget was submitted, bereft of details, according to at least one member.

“We were all in agreement that there was a lack of transparency,” said Board Member Eliana Pintor Marin. “I asked the question tonight ‘where are the programs being cut,’ and I got no answers.”

Up against an April 8th state-imposed deadline, the budget as submitted to the board totals just under $1 billion.

“There is no number of full-time jobs losses itemized in the budget,” Pintor Marin said.

The vote, which puts the school district in jeopardy of losing critical funding, was a slap at the Gov. Chris Christie-appointed Anderson.

Last year, the commisisoner took credit for getting the local teachers to embrace a new contract that includes a Christie-endorsed merit pay system based on student performance.

Board member Shavar Jeffries, a likely 2014 candidate for mayor, said he sympathized with Anderson’s position.

“She has a very difficult job and she’s working to do the best she can,” he said. “But before I can vote on a billion dollar budget I need more information. I cast the vote reluctantly.”

Jeffries said he was troubled by the lack of specifics regarding the schools-based budget cuts.

“I have a lot of questions about those cuts,” he said. “Some high schools increase their budgets by 9% but others cut as much as 25%, including West Side High School. Science and Technology schools are cut and it’s not clear why.”

Board Chair Antoinette Baskerville-Richardson acknowledged that by voting down the budget, the board had entered uncharted territory and likely faces legal entanglements. 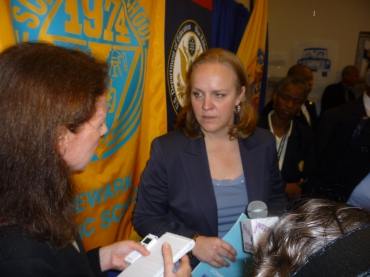