CAMDEN – When Gov. Chris Christie announced Monday his plans for the state to take control of the Camden City schools, it marked the fourth time the state has opted to take the reins of a struggling school district and it is the first time Christie has done so.

The governor announced his plans during a news conference at a Camden high school, where he was joined by Democratic lawmakers and local officials – the latter of whom voiced their praise over the takeover.

The governor merely announced his plans for the state to take control of the school. However, scant details about what a takeover – or, “intervention,” as the governor would put it – will look like.

Christie said he hopes the state will assume its operational role by the time students return to classes in the fall, however the governor did not provide a specific takeover timeline today.

“We’re announcing our intention today to intervene and then work with the existing structure,” Christie said in Camden, explaining “there’s a legal process that goes along with this,” and the earliest the state would take the reins would likely be six to eight weeks from now.

Christie told reporters that while “you can’t really put a fine start date” on when he began mulling a takeover of the Camden schools, the final decision was made about four weeks ago.

The governor said he knew there were serious issues surrounding Camden schools when he first took office, but said a Department of Education study released in August 2012, coupled with urgings from DOE officials, pushed him toward a district takeover.

“The combination of the report in August ’12 along with the things that I’ve seen on the ground here myself just led me to want to have more conversations about it. I called Chris (Cerf, commissioner of the DOE) in and other members of my senior staff and said, ‘I want you to begin to examine this closely and come back to me with some ideas and recommendations,’” Christie said.

“They’ve done that over the course of the last few months and the ultimate meeting was about four weeks ago where they made their final presentations to me and then I made the decision within about six or seven hours after they ended that meeting – in my own head – and then communicated to them later that next week,” he said. “And then we began to work with the local folks here.”

A blueprint for Camden?

The governor said that previous state takeovers would not necessarily provide a template for the Camden situation.

The state has already taken the reins of school districts in Jersey City, Newark and Paterson. But, those takeovers began prior to Christie taking office.

Again, Christie offered little in the way of specific ideas for taking control of Camden schools, except to say people should not jump to conclusions about him mirroring what has been done in other districts.

For example, Christie was asked by one reporter whether his administration would work to bring changes to the collective bargaining process with Camden teachers.

Here’s what the governor had to say:

“Let’s be really clear: Newark is Newark, Camden is Camden, and you cannot look – and I think it is wrong to look – at every urban school the same way. Don’t take the fact that I say, ‘Sure, we would be happy to be involved in the collective bargaining process,’ to then conclude that we would want the same or similar type of contract with teachers in Camden that we just negotiated with teachers in Newark,” he said.

“All those things are going to be determined as we access things on the ground here in Camden and work with the local folks, including the teachers and the teachers’ union, to try to come to a place where we’re all doing better for the children of this district,” he added.

The state’s largest teachers union, the New Jersey Education Association, issued a statement shortly after the governor’s announcement that called into question how successful state-run districts have fared in the past, but said it would “withhold judgment on the Camden takeover model until” they see details, said a statement from NJEA President Barbara Keshishian.

Christie said he looks “forward to working with the NJEA on this project,” but told reporters he did not speak with the union prior to his announcement.

Christie, who has had a rocky relationship with the NJEA, said he hopes recent cooperation in other areas of the state will foster a good working environment with the union this go-around.

“I am absolutely confident that they will come to the table in the spirit of cooperation,” he said, quickly adding that “it’s not going to be something that we’re going to play games” with, and promising to be tough on any person or organization that intentionally puts up barriers to a partnership.

Christie was noncommittal on describing what role the local governing body would play in the future, but offered a brief response to the role school boards have played in other takeovers.

“Typically what happens in these situations … is that the school board becomes an advisory board,” he said. “We’ll continue to work through that as we work through the legal process.” 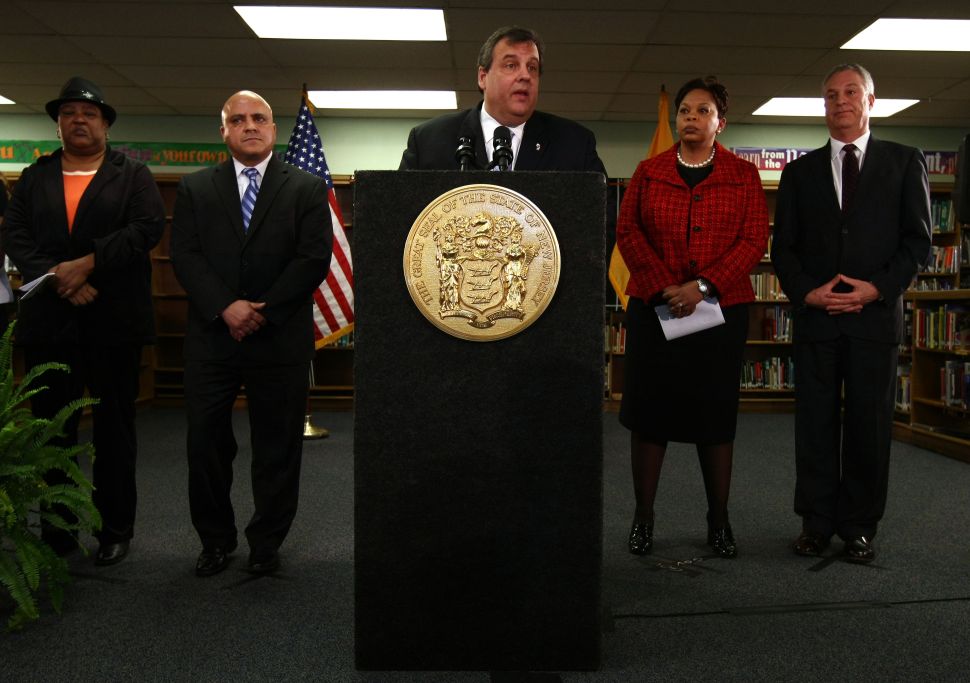