Gasp! Shock! Quelle horreur! Did you know that Columbia University students–those fine, Ivy League men and women who only occasionally offer to have sex for money on Sugar Daddy websites in order to pay their tuition–are stealing directly from their institution? It’s true! Every week, thousands of dollars goes missing from the coffers at Columbia, and the financial sinkhole’s location has finally been tracked to the dining hall, where students are stealing Nutella at a cost of $5,000 a week.

Then again, that’s small potatoes compared to those kids at Oberlin who are dressing as Klan members and defacing property with racial slurs, because what?

No one expected the Ivy Leaguers to wolf down the snack at the rate of what could cost $260,000 a year.

The problem is that undergrads are not just filling up while in the cafeterias. They’s pilfering it to eat elsewhere.

“Students have been filling cups of Nutella to-go in Ferris Booth Commons,” one of the campus eateries, Dunn said. “And taking the full jars out of John Jay [dining hall], which means we’re going through product faster than anticipated.”

Though as the article is quick to mention, it costs every student $2,363 to eat in the dining halls per semester, which equals $5,260 a year. And since there are 5,000 students who eat in the dining halls every day, that means the total Columbia profit just from their basic meal plan is $26,300,000. That number might actually be higher, seeing as the undergrad meal plan basically forces them to pay for at least 15 meals a week, with two of the three options requiring the payment of 19 meals in the dining hall paid out ahead of time, whether they end up eating them or not.

We think they can afford the hypothetical $260,000 to keep their Italian spread a little less thin, huh?

So this Nutella theft ring seems relatively mild, especially when compared to say, Oberlin College in Ohio, where students have the choice after the first semester to opt out of the dining plan and work in a food co-op, but are still pissed enough to dress like Klan members* outside the Afrikan Heritage House, write anti-Semitic and racist rhetoric on bathroom walls and posters, and basically be the worst people ever, possibly all in an effort to prove some point about free speech. Maybe. Or maybe just to get the day off from classes.

It’s tough to explain what would motivate someone to rile up the super-P.C. Oberlin crunchy community unless you actually went there, or happened to read stumble on the Oberlin MicroAgressions Tumblr. Actually, that gives you a pretty good sense of it. Then again, the idea that the perpetrators were part of the MultiCultural Resource Center and wrote all of these hateful things because they were making some sort of statement about how an actual hate crime would make people feel and also we all have the right to do whatever we want (that’s what the First Amendment is, correct?) is another good tip-off. 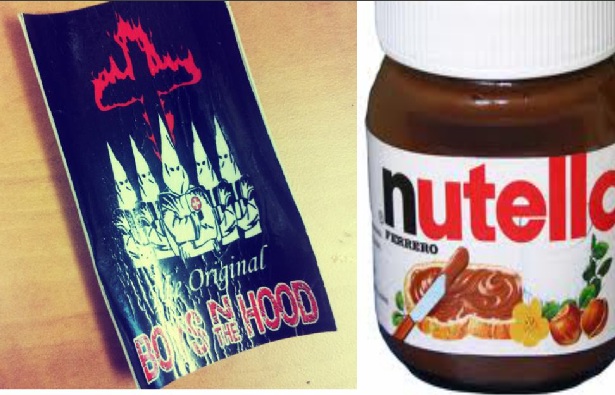