Comptroller John Liu officially kicked off his campaign for mayor at a raucous rally on the steps of City Hall attended by several hundred people where he vowed to “be a mayor not of the one percent, but of the 100 percent.” Along with promising to enact populist reforms on housing, education, law enforcement and the business community, Mr. Liu dismissed the ongoing corruption case against two of his associates as a politically motivated “witch hunt” that would not stop him from winning the election.

“When you go after powerful people and rich corporations, they’re going to come after you,” Mr. Liu declared in a fiery speech. “They certainly have made my life challenging, but let me be clear, we are not backing down!”

Following Christine Quinn, Bill Thompson and Bill de Blasio, Mr. Liu was the last of the four major Democratic frontrunners to officially announce his candidacy for mayor. The main kickoff event at City Hall was the centerpiece of a fourteen hour launch day that took him across all five boroughs and it drew, by far, the largest crowd any of the candidates have managed to turn out for their launches. So many people showed up to see Mr. Liu that a large overflow waited outside the gates in City Hall Park and those at the center of the action stood shoulder-to-shoulder with periodic disputes breaking out in the crush of the crowd.

Mr. Liu arrived accompanied by several relatives and City Council members Peter Koo and Charles Barron. After his wife and son gave brief introductions, Mr. Liu launched into a speech that started with his family’s journey to New York City. If elected, Mr. Liu would be the first Asian mayor of the five boroughs. He told the crowd his family was drawn to New York from Taiwan because of the city’s “sacred promise” of “opportunities.” He highlighted this by sharing an anecdoate he’s often fond of repeating, the fact he and all his brothers were named after the Kennedys.

“My parents truly believed in that promise, that an immigrant family named Liu could work their way up to become like the family named Kennedy,” said Mr. Liu. “That’s why they named me John and you could ask my brothers Robert and Edward.”

Mr. Liu went on to share another one of his oft-repeated tales, a story of his mother working in a “sweatshop” that she has described as untrue.

“My parents kept their part of the promise, my dad taking a job far beneath what he had had in Taiwan and my mom spending years in a sweatshop many days that I had to join her in,” Mr. Liu said. “And New York keept its promise to us, because, if we didn’t quite rival the Kennedys in prominence, a New York City public school kid like me could … make it all the way up to New York City comptroller.”

Mr. Liu presented these bits family history to illustrate his argument that, under Mayor Michael Bloomberg, the city no longer offers residents the chance to succeed he and his family once experienced.

“I don’t need to tell you that economic justice and equal opportunity have gone the way of checkered cabs and 50 cent slices,” said Mr. Liu. “In New York City these last twelve years, the rich keep getting filthy rich and far too many New Yorkers can’t even think to get ahead because they’re struggling just to get by.”

He vowed to bring upward mobility back to the five boroughs again by fighting for “senior citizens,” “working mothers,” “immigrant breadwinners,” “small business owners,” and “struggling teachers and students.”

“Mayor Bloomberg and his enablers have made it harder for them while making it so easy for the wealthiest new yorkers to leave the rest of us behind,” Mr. Liu declared.

While all of the four Democrats who are leading the pack of mayoral contenders have struck a populist tone, Mr. Liu described himself the only one who has personally experienced economic hardship.

“The difference between them and I is, I’ve lived, said Mr. Liu. “I know what it’s like to work your heart out and barely keep your head above .”

Mr. Liu also rattled off a list of achievements from his time in the comptrollers office including uncovering “waste, fraud and abuse” in the “mayor’s pet projects like CityTime and the 911 call system.” He said these projects saved “billions for the people of this city earned him the powerful enemies he accused of coming after him.

Though Mr. Liu obviously wants to dismiss the case against his donor, Oliver Pan, and former treasurer, Jenny Hou, for allegedly orchestrating a scheme to fuel illegal donations to his campaign war chest, his speech clearly didn’t eliminate the controversy the allegations have caused around his campaign. When Mr. Liu took questions from reporters after his speech, nearly every question was about the case. Mr. Liu himself has not been charged in the case and he argued anyone who wants to accuse him of wrongdoing needs to “put up or shut up.”

“This so called investigation has been going on for four years now. They’ve interviewed thousands of my supporters, reviewed a million documents even wiretapped my cell phone for a year-and-a-half,” Mr. Liu said. “When is this going to end? It’s time to put up or shut up, that’s what it is. We’ve got a campaign to run and an election to win. We’ve got changes to make in the City of New York. We’ll let the people decide.”

Since Mr. Liu had alluded to the investigation being fueled by enemies he has made while working for the people of New York, Politicker asked him to elaborate about who he believes is “after” him. Mr. Liu wasn’t willing to get any more specific.

“Hey, listen, you know, there are–it’s a political town, there are lots of vested interests,” said Mr. Liu. “Vested interests that I’m sure would not like to see change. So, we’ll be working on it and talking about it a lot more as the months come by.”

Another reporter asked Mr. Liu whether he might change his tune if Mr. Pan and Ms. Hou are found guilty after the trial against them begins next month. Mr. Liu said he doesn’t plan on slowing down at all. 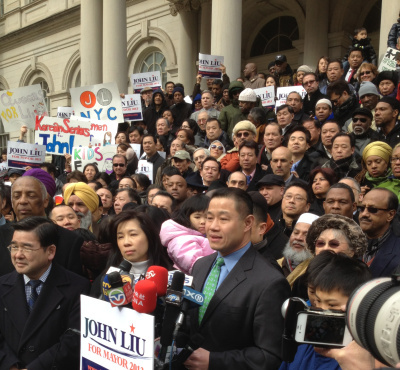