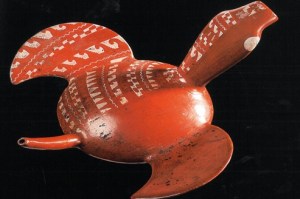 One of the items from the sale. (Courtesy Sotheby’s)

A Sotheby’s auction of pre-Columbian art in Paris today fell short of expectations following negative press over how some of the artifacts sold in it were obtained. The New York Times has the story.

Four countries—Mexico, Peru, Guatemala and Costa Rica—had urged Sotheby’s to stop the sale, which garnered just $13.3 million, well below the presale estimates of $19 million to $23 million.

The countries objecting to the sales said they were improperly removed from their home countries, or were fake.