We never thought we’d find ourselves in the same room with Snooki, Honey Boo Boo’s mother, Anderson Cooper and Madonna, but there we were on Saturday night at the 24th annual GLAAD Media Awards, which attracted a colorful bunch of people to the Marriot Marquis Hotel in Times Square.

It was all in line with GLAAD’s approach. The organization works to ensure that people in the LGBT community are fairly represented, and on Saturday night even the bathrooms were made gender-neutral.

Before the awards ceremony, which doubled as a fund-raiser, we ran into Augusten Burroughs, author of the bare-everything memoir Running with Scissors. Mr. Burroughs told the Transom that he was happy for Mr. Cooper, who would be receiving an honorary award later that evening, presented by Madonna. “I think he’s a great role model for everyone,” Mr. Burroughs said.

It seemed to us that most people in attendance were waiting for Madonna to appear, but first we had to get through the entire ceremony, which was hosted by Good Morning America anchors Josh Elliott, Lara Spencer and Sam Champion, who is gay and was recently married in New York.

Clocking in at around three hours, the ceremony ran long. (This wasn’t the Oscars, after all.) Most of the speeches could have been cut in half, there were embarrassingly unsubtle plugs for Ketel One, the ceremony’s corporate sponsor, and a couple of the awards seemed sort of forced. The Amazing Race, for example, on which a gay couple took the prize last season, won for outstanding reality program, beating Here Comes Honey Boo Boo.

There were moments throughout the night, however, to warm the cockles of your heart and keep you entertained. At one point, Mr. Champion—who had a memorable TV gaffe on Monday when he said, “That’s the weather around the naked,” instead of “nation”—went through the room interviewing guests.

“It’s 2013, we need to get with the times” Honey Boo Boo’s mother, otherwise known as Mama June, told the crowd. “I’m probably the biggest fruit fly you will ever meet, guys!”

When Mr. Champion gave the microphone to Snooki, her pal JWoww by her side, she yelled: “It’s great to be here, and I think you’re all fucking awesome!” That was all she said.

Minnesota Vikings punter Chris Kluwe—who, in a memorable letter published by Deadspin last year, assured Maryland state delegate Emmett C. Burns Jr. that gay people getting married “won’t magically turn you into a lustful cockmonster”—made a brief cameo with Baltimore Ravens linebacker Brendon Ayanbadejo to show support for GLAAD. (We wonder what kind of letter Mr. Kluwe would write to Michelle Shocked, who reportedly said “God hates fags” over the weekend.) And Jazz, an 11-year-old transgender child, appeared on stage with her family in a black sequined top and a pink skirt.

There must be something about GLAAD that attracts people who go by one name.

Finally, Madonna walked coyly on stage in a Boy Scout uniform. GLAAD has been campaigning against the Boy Scouts of America for its ban on gays, and Madonna was there to vent—as well as to give the Vito Russo Award to Mr. Cooper, who gave a refreshingly short speech. (It’s hard to follow Madonna, as he admitted.)

“I wanted to be a Boy Scout, but they wouldn’t let me join. I think that’s fucked up. I can build a fire, I know how to pitch a tent,” Madonna said, straying from the lines on her teleprompter, which could be seen on a large screen in the back of the room.

We liked what Madonna said, but we were more impressed by this line from Honey Boo Boo, which we’d first heard earlier that night: “Ain’t nothing wrong with being a little gay. Everybody’s a little gay.” 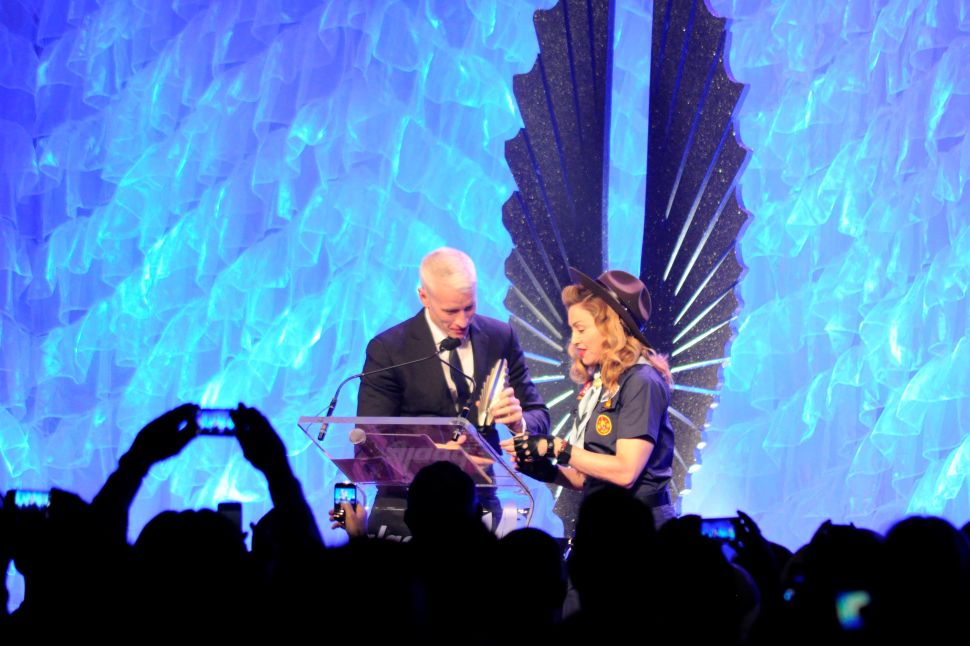