The artist Mark Dion’s C.V. begins normally enough, but it has a quirk. “Born in 1961 in Bedford, Massachusetts,” it reads, and then, “lives in New York and works worldwide.”

“As much as I live in New York, until I came back, I’d only been here for six days for all of January and half of February,” Mr. Dion told The Observer over coffee at Cookshop in Chelsea last month. His appearance and bearing are those of a polished university professor; he’s a little quiet at first, but loquacious once he gets going. “I really am on the road all the time,” he said. He had recently been to Dallas and Minneapolis, and had just returned from a three-week expedition in Naples, researching the urbane 18th-century British ambassador Sir William Hamilton for an upcoming show in the city.

A willingness to travel constantly is pretty much a requirement of today’s in-demand artists, who are asked to flit from one major international exhibition to the next. Mr. Dion certainly falls into that class (he’s been in the Venice Biennale, Documenta, the Carnegie International), but he has long worked a bit differently from many of his fellow travelers.

There was that time in 1992 when he dug up a hunk of jungle floor in Brazil and presented it at Rio de Janeiro’s Museum of Modern Art, just as the American naturalist William Beebe did in Guyana in 1917—Yard of Jungle, he called it. And 1993’s Great Munich Bug Hunt, which had him examining, alongside entomologists, the insects living on a felled tree from the Black Forest.

And, probably his most famous work, 1999’s Tate Thames Dig, for which he worked with volunteers to comb that river at low tide. They displayed their discoveries at London’s Tate Gallery. When the new MoMA building was under construction more than 10 years ago, he did a similar excavation, unearthing all sorts of items, from part of a Bruce Nauman work buried in the sculpture garden to scraps of wallpaper from the recently demolished Dorset Hotel.

When we met, he was readying his fifth show at his New York gallery, Tanya Bonakdar. “It’s really rare for me to do something on home turf,” he said as he showed us around the gallery, where the show opened last Thursday and runs through April 13. “Most of my things my closest friends and colleagues never see, because they’re somewhere else in the world.”

The show is a retrospective of sorts, with drawings and prints, many made in conjunction with projects he has completed over the last 25 years, along with a few new sculptures. One tiny drawing has cartoony portraits of people who have inspired Mr. Dion’s wide-ranging art, including a bearded Darwin, Earth artist Robert Smithson (holding a little shovel) and Audubon (a gun). He’s titled it Apostles (2010).

“My relationship to science is like the Renaissance artist’s relationship to theology,” Mr. Dion explained at Cookshop. “I’m representing the system through which I understand the world, my cosmology. How one understands our place. How we got here.” Inhabiting the lives and practices of various professionals and historical figures, and transposing them into new, often surreal circumstances, he experiences, toys with, questions and celebrates how knowledge gets made and passed on.

“He’s created a genre of being an artist,” is how Elizabeth Armstrong, curator of contemporary art at the Minneapolis Institute of Arts, put it. “He’s part curator, part dilettante archaeologist. He is one of the pioneers.”

To hear Mr. Dion talk about his art, it harks back to a humanistic era when the disciplines of art and science weren’t so distant from one another. He is interested, he said, in “that weird moment in time when the printmaker, the artist and the scientist were all the same person.”

Mr. Dion arrived at Hartford Art School in the early 1980s planning to be an illustrator. “I come from a really working-class family,” he said. “My mother dropped out of school at 16, worked in a textile mill until I came along. Art wasn’t really a part of their interests … The only art I knew was illustration and album covers. I imagined I would be going down one of those routes—fantastic album covers or comic books.” Instead he ended up studying with the artist Jack Goldstein, who made conceptual films and paintings that questioned the very nature of image-making. “That did nothing less than just blow my mind,” Mr. Dion said. “Within the first days, I drank the Kool-Aid, I was completely committed. What was obvious to me was how little I knew.” He got a job as assistant slide librarian to brush up on his art history, transferred to the School of Visual Arts in New York for a period and eventually joined the Whitney’s prestigious Independent Study Program, falling in with some of the day’s most forward-thinking artists.

Ms. Armstrong invited Mr. Dion to be part of her exhibition “More Real? Art in the Age of Truthiness,” which opens March 21 at the Minneapolis Institute of Arts. He responded with an installation that looks like a curator’s office from the 1950s.

“He was the first modern art curator in the 1950s, and he disappeared, and accidentally his office was walled over and only recently rediscovered,” Mr. Dion said of the piece. “We’ve discovered this, and now we’re at the moment when the curators are thinking, perhaps, of turning this mystery into a period room.” But what actually happened to the man? “Maybe it had to do with McCarthyism,” he said conspiratorially. “There was plenty to dread for intellectuals who had an interest in the Russian avant-garde in the 1950s.”

Making the work involved something akin to an excavation of the museum. “It involved using the museum in ways we never have before, thinking about art in ways we don’t traditionally,” Ms. Armstrong said. Mr. Dion toured all of the storage rooms and administrative spaces and dug up old photos of what curators’ offices looked like back then. Recreating the era also involved lots and lots of shopping, which is a touchstone of his projects.

“Every now and then we would get a surprise FedEx package, our care packages,” Ms. Armstrong said. They’d be filled with various knickknacks snatched up from flea markets around the world, all meant for the curator’s office. One box contained Band-Aids from 1953.

While I waited at Bonakdar for Mr. Dion, a deliveryman arrived with another such box. 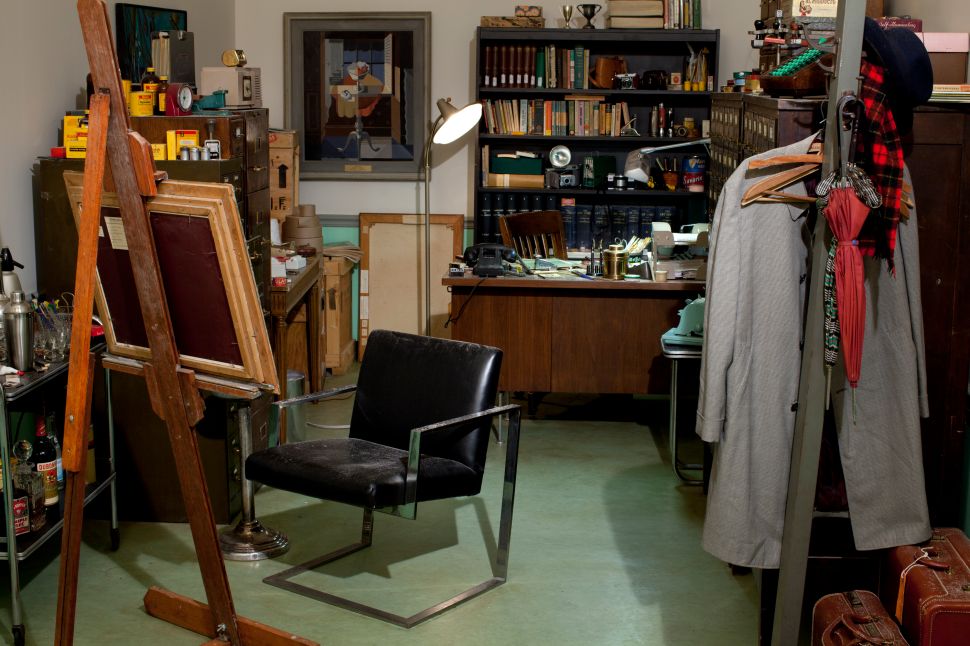