Troy Stevenson, executive director of Garden State Equality, is preparing this morning to testify in front of the Senate Health Committee to talk about “gay cure” and “conversion” therapies and why they are so harmful for LGBT youth, he said in an email as he rode the train to Trenton.

Stevenson confessed that this issue is deeply personal for him, and plans to share the following story with legislators this morning…

“But that first kiss was interrupted. The football team caught us behind the school after practice. We ran for what we felt was our lives, and what may very well have been in Oklahoma in the early 1990s.

“We made it to our homes safely, and my first call was to my friend to make sure he was OK.

“But he wasn’t OK,” Stevenson said. “He described the ‘conversion’ camp his parents sent him to when he told them he was gay. He described things that I couldn’t imagine, indignities that I won’t repeat. He said, ‘I will never go back.’

“That was the last time we spoke. The next day I found out that he took his life. There is no doubt in my mind that the thought of returning to that torment was more than he could take.

“It took me another decade before I was brave enough to honor his memory and honor my true self-identity by coming out of the closet once and for all. I became a better person, an advocate, and stronger than I knew I could be. I found a new home, here in New Jersey, and I am proud to lead an organization that works every day to fight for the equality, fairness, and acceptance that I never felt as a young person.” 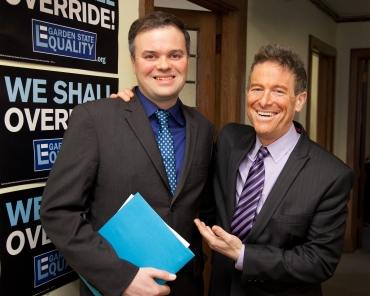