A civil complaint by a former West New York employee presents the portrait of a city hall in crisis under the leadership of Mayor Felix Roque, who allegedly fired a former ally as political payback then rehired him in exchange for information on a website run by the mayor’s political enemies.

The mayor’s attorney said the entire complaint is bogus.

A former West New York processing clerk, busted down to laborer by the mayor during the course of their dispute, Gomez filed paperwork last month in U.S. District Court against Roque and the mayor’s associates. In addition to the mayor, the suit  names West New York Commissioner Fiord’ Alisa Frias, Deputy Mayor Silvio Acosta and Joseph Roque, the son of the mayor, as Roque co-defendants.

Out of work since Roque bounced him out of city hall, “My client is financially suffering as a result of the defendants’ actions in the complaint,” said Gomez attorney Victor Afanador. “It was the mayor’s way or the highway. If he didn’t do what he wanted, you were on the bad boys’ list.”

Gomez seeks over $150,000 for pain, economic and mental anguish he says he suffered at the hands of the mayor, whom he helped get elected in 2010.

“All the allegations are false, malicious and downright disgusting,” said West New York Attorney Gil Garcia. “We will fight them vigorously. All parties will have their day in court. These are outright false allegations just to smear. There will be a day in court.”

According to the complaint, Roque essentially wanted Gomez to continue in his role as community fundraiser while on the public dime, a demand Gomez says he refused, and which gradually broke him down until he was out of a job.

In mid-November of 2011, Gomez says Roque told him he wanted to raise funds for a Christmas party and toy drive. On Dec. 5th, 2011, Roque held an organizational meeting “using public resources,” according to the complaint, and demanded that Gomez secure significant contributions from merchants in part of the UEZ (Urban Enterprise Zone).”

Gomez alleges that when Roque later called him and learned he had made no progress, the mayor “harassed and intimidated him” to secure donations.

According to Gomez, Roque called him “a fat, out of shape piece of shit,” and said, “I am going to buy you a treadmill for your birthday.” Roque ordered him to go out immediately, during work hours, to secure contributions, the complaint says.

“Mayor Roque and his office made several harassing and intimidating calls during the next several days demanding that Gomez, using public resources, during work hours, and under the auspices of his office, pick up toy boxes and money from the businesses in the UEZ,” the complaint says.

Gomez said he didn’t fulfill the demands, began organizing to run as a CWA leader, and as a result, Roque took retaliatory actions, shoe-horning Gomez and his staff into a “closet-sized” office, according to the former clerk.

Gomez complained to Clerk Carmella Riccie, who set up a meeting with Frias. Riccie told the Roque-aligned commissioner that Gomez was not allowed to fundraise during work hours, acording to the complaint.

Shortly after the meeting, Gomez received a call from the mayor, who threatened to terminate Gomez, the complaint says.

The complaint then details a meeting among Gomez, Roque and Acosta, who went to Roque’s medical office and discussed rehiring Gomez if Gomez could supply Roque with information about www.recallroque.com.

Later arrested for hacking that site, Roque at the meeting showed Gomez a stack of documents and said they were proof that Gomez and others created a website in opposition to Roque, the complaint says. The mayor told Gomez he had emails of recorded conversations between Gomez and others involved in the political campaign to recall Roque.

At the end of the meeting, Acosta and Roque offered to rehire Gomez as deputy director of the parks department.

Out of a job and in need, Gomez said he reported to work.

“The next day,” according to the complaint, “during a cabinet meeting in front of various department heads and other public officials, Gomez was publicly humiliated by Mayor Roque demoting him to a laborer as a garbage collector and threatening Gomez to ‘take it or leave it.’” 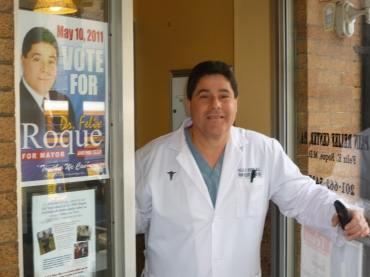