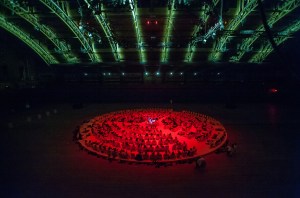 Karlheinz Stockhausen’s sound work Oktophonie (1990/91) is 70 minutes of unsettling drones and occasional violent bursts recorded by the German composer almost entirely with electronic equipment. Stockhausen, who died in 2007, intended for it to be played on eight speakers arrayed in a cube around the audience as part of his opera Dienstag (Tuesday) from his 29-hour series Licht. At the moment, it’s playing at the Park Avenue Armory through March 27. It’s perhaps worth mentioning that Stockhausen reportedly felt that the ideal location for it was outer space.

Entering the cavernous, 55,000-square-foot Wade Thompson Drill Hall for the opening performance on Wednesday night, attendees, including Marina Abramovic and MoMA Associate Director Kathy Halbreich, were told to remove their shoes and put on a white cloak, provided by the Armory. We’re not going to name names here, but not everyone played by these rules. (Some couples had come wearing all white, which was cute—if a little cultish—and that more than made up for the defectors.)

Once in uniform, everyone made their way to the center of the space, where low white chairs had been arranged in concentric circles around an array of soundboards and computers, the cockpit of the spaceship. Artist Rirkrit Tiravanija, being an adept of communal rituals, was responsible for the spare, elegant set. (An aside: his current show at Gavin Brown’s Enterprise closes tomorrow, Saturday, March 23.)

The houselights dimmed and fainter ones came on around the perimeter of the room so that you felt like you were floating in a vast, lifeless void. And then Oktophonie was let rip, opening with a metallic gong blast that gave way to what sounded like deep organ groans from every corner. Violins playing tremolo at a high pitch joined in, followed by a Theremin with cutting glissandi. (Again, all electric sounds.) One of Stockhausen’s collaborators, Kathinka Pasveer, manned the cockpit, guiding the space journey.

Epic percussive explosions, overhead and in the distance (this was a sophisticated sound system), occasionally rocked the ship; birdsong circled us. We were bathed in red light, then blue. Voices, wailing—one of them Stockhausen’s from beyond the grave—came in through the fields of sound. In this part, the piece concerns the archangel Michael’s battle with Lucifer—from the sound of it, a horrifying scene.

During the last third or so, things mellowed out, as if the ship had landed on a lunar surface. Rose lights slowly came on, then white ones. There were explosions and then the drones began a long decrescendo as the lights grew brighter. It became so bright that it was difficult to see; the air itself was glowing.