The “pre-launch” page for new startup called Harry’s features a handsome image of a razor emblazoned with an “H” logo and the slogan, “RESPECTING THE FACE AND WALLET. SINCE LIKE…RIGHT NOW.” Sign up to learn more and you’ll be directed to what looks like a package deal on shaving supplies, including the historically-themed “Truman Handle” and the “Winston Shave Set” How mid-century! But why not just label it the Don Draper special?

According to a source, Harry’s is actually tied up with the marketing experts at Warby Parker. Jen Rubio, head of social media at the eyeglass retailer, shared the site on her Facebook page with the message, “Remember in 2010 when I said Warby Parker was going to be big? This is kinda like that.”

Betabeat also heard that Warby Parker put $4 million into the company and the name. We’ve reached out to the company and will update the post when we hear back. Warby recently raised $41.5 million funding from American Express and J.Crew CEO Mickey Drexler and is rumored to be discussing a partnership to hip-up Google Glass.

UPDATE 3/7: As Ben Kessler points out in the comments (below), Warby Parker cofounder Jeffrey Raider is listed as the cofounder and “co-CEO” of Harry’s on LinkedIn. None of Mr. Raider’s fellow Warby cofounders–Neil Blumenthal,  David Gilboa, or Andrew Hunt–currently lists Harry’s on their LinkedIn profiles.

UPDATE 3/11: Another tipster directed us towards a Form D filing that appears to be tied to Harry’s. Mr. Raider, Andy Katz-Mayfield, and Thrive Capital founder Joshua Kushner* are listed as directors on the form, which was filed last August. On his LinkedIn profile, Mr. Katz-Mayfield lists himself as a the cofounder and co-CEO of Harry’s. The form indicates that the company raised $2.25 million toward a $4 million equity round from two investors.

Harry’s already has some competition among the seemingly endless list of subscription startups, including the lower-brow humorists at Dollar Shave Club, which raised $9.8 million to sell discount razors.

Vishal Sapra, who works in global business development at MRY, also shared it on Facebook, with the note: “ATTENTION Gentlemen: my brilliant pal (and Vikas Sapra’s housemate before I replaced him) Will Freund, a Gilt.com veteran, is going to change the way we shave! For a smoother, cheaper, and cooler shave, check out Harry’s! Still in prelaunch so he welcomes your feedback! Start sharing and get some free man goodness!”

On his LinkedIn account, Mr. Freund is listed as a VP of creative production and sales operation at Gilt Groupe.

Stay tuned for a new deal on the FDR beard trimmers? 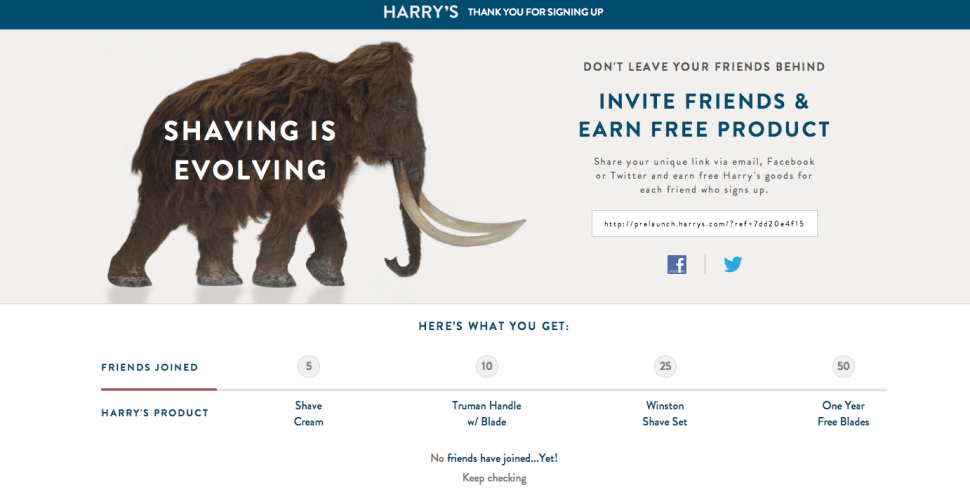