Updated: Tina Fey responds below!
Have you been reading all about Taylor Swift telling Amy Poehler and Tina Fey that they are going to hell for their Golden Globes jokes in the most recent issue of Vanity Fair? Or wait, was that Katie Couric who told Taylor Swift that, and the singer was just relating it back in an anecdote? Did Amy Poehler say she was actually going to hell? Did Couric totally rip off a very famous Madeleine Albright quote about a basketball?

If you are confused, don’t worry. Here are some GIFs from Mean Girls to help explain.

Okay, so first of all there is Taylor Swift, who is a person who is not above mocking her ex at Grammys during her opening song, because:

And she is pissed because during the Golden Globes, Amy Poehler and Tina Fey were making some jokes, and one happened to land on her. Technically, Ms. Fey was the one who dug it to the singer about her relationship with Harry Styles, warning her not to go after Michael J. Fox’s son.
“Or go for it!” Ms. Poehler said.
“No, she needs some me time, for herself,” Ms. Fey countered. Remember, they were pretending to be drunk.
[youtube http://www.youtube.com/watch?v=0llm8lTa8xI%5D
And then Taylor Swift, who never told Kanye West to go to hell BY THE WAY, was all:

So she waited until she was on the cover of Vanity Fair this month, so she could say this in a profile (re: the Golden Globes jokes):

“You know, Katie Couric is one of my favorite people, because she said to me she had heard a quote that she loved, that said, ‘There’s a special place in hell for women who don’t help other women.'”

Because seriously, Amy and Tina, don’t even try to mess with the girl who literally wrote a song called “Mean”:

Unfortunately for Katie Couric, who you just know is feeling like:

Especially when it was Madeleine Albright who actually said that.

So right out the gate, we’re pretty much feeling:

But luckily, Amy Poehler is a classy lady, and responded, “Aw, I feel bad if she was upset. I am a feminist and she is a young and talented girl. That being said, I do agree I am going to hell. But for other reasons. Mostly boring tax stuff.”

Ms. Swift has not yet responded, nor has Tina Fey. But as it stands right now, we have Amy Poehler being all:

While a grown-ass 23-year-old is freaking out in a corner, like:

Update: On Wednesday, Ms. Fey joined the fracas, telling Us Weekly that Swift should just get over it.”It was just a joke, and I think it was actually a very benign joke,” said the comedian. To New York Magazine, she added that the young singer wasn’t the only one who could take out her fury in verse:

Which, as much as we’d like to see, is also kind of defensive response for someone so much older, wiser, and cooler than Taylor Swift. Like, turn the other cheek, Tina Fey! You do not have to drag yourself down to “Dear John” levels! Be more like Poehler, who has a new social network for girls about self-esteem issues, instead of the woman thinking up satirical songs that rhyme “Swift” with “John Mayer’s dick.” 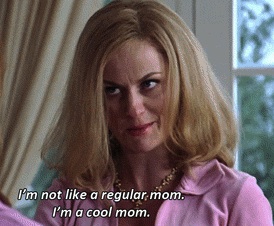