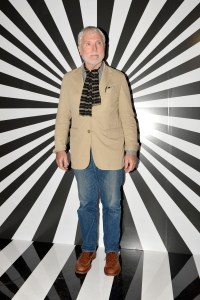 Glenn O’Brien said a lot during his tour of the Jean-Michel Basquiat show at Gagosian 24th Street for a group from the New York Academy of Art, but the main thing you walked away with was a sense that it must be really weird to have been pals with the artist.

“We were on a tour of the recent show at the Brooklyn Museum, and the guide was getting into all these complicated symbolic reasons for the hinges on some of the paintings,” Mr. O’Brien said, standing before one of the works. “The fact is, the elevator in his Crosby Street studio was very small. He had to put those on there to get them out of the building.”

Mr. O’Brien encouraged everyone to note the shoe marks on some of the works. Basquiat always favored Nikes and Reeboks, which you could see there. Why did Basquiat paint the Riddler and the Joker? Because he loved the Adam West Batman. He often worked with the TV on the studio. “We’d go over there and watch an Alfred Hitchcock movie,” Mr. O’Brien said, “and at the end of the movie, he’d have a complete work.”

“I think he identified with Samson, especially after he got long dreadlocks,” Mr. O’Brien said, pointing to a painting that said “Samson.” “He used to make fun of me for having short hair. He’d say I had an atomic punk haircut. I’d call him Bullwinkle in response.”—D.D.