EAST ORANGE – Mayor Bob Bowser puts considerable stock in being a mayor, an office he has held for 16 years in this Essex County town where the main, broad boulevard rumbling with buses, cabs and cop cars runs into Newark to eastward and into the mountains west.

Few people know their freeholders or Assembly people or even, in many places, their congressperson, Bowser told a packed room of supporters at his kickoff in pursuit of a fifth term.

But they know the mayor.

And the mayor knows things, like how to wait to put a shovel in the ground of a new development before putting up the sign announcing the project.

Bowser learned that lesson the hard way, he said, when the sign collapsed in ruin before the new building went up, but while his neophyte opponents try to campaign for East Orange offices in Bloomfield – unable to find the town they hope to serve on a map, according to a diabolically grinning Bowser amid guffaws throughout the room – the incumbent professes decidedly local love.

“This is where the action is,” Bowser declared. “We need to work at the local level.”

With that in mind, the veteran of LD 34’s biggest town (the others are Montclair, Orange and Clifton) is building an entire, local-based slate around himself.

He’s won off the line before. In his first mayor’s election, he defeated a certain future Assembly Speaker by 52 votes.

Running on the Bowser team against Oliver and Assemblyman Thomas Giblin (D-34) are Denise Baskerville, a former parent educator at the East Orange Board of Education; and Beverly Williams, a former 1st Ward councilwoman.

“This is my guy right here,” the mayor said as he urged Alexander to take a bow in the balloon-draped room. “Our senator. Please support him.”

Moments earlier, after Alexander had pulled up in front of headquarters, alighted on the sidewalk and entered the crowded room, he went up through the crowd and found Bowser. The two men clasped hands amid the shower of flash bulbs.

It was a significant moment.

When everyone else took their seats, the men remained standing.

“I am a Democrat,” the Senate candidate announced to a roar of applause. “I can’t sit idly by while I see what’s happening. I can’t sit behind the scenes. I watch Gov. Christie as he pushes us and pushes us to the right. We can do better. Year after year we send the same people to Trenton and we see the same stuff happening. For four more years I can’t keep reading about the inequality in the public schools. We need to increase the minimum wage now. We need gun control now.”

Minimum wage and gun reforms happen to be two of Oliver’s signature issues, and their invocation at this event underscores the respect Oliver commands now from her seat of power. As speaker, the East Orange resident, daughter of a community activist from Newark’s South Ward, has defined herself as  a local icon who may very well transcend local politics – this from Bowser allies in the room.

It’s not expected that Williams or Baskerville will try to tackle Oliver.

But Alexander, who had almost $125,000 in his campaign account in January, has every intention of trying to unseat Gill. His alliance with Bowser and his place on a slate determined to get good ballot placement get him closer to his goal after.

Knowing the mayor here helps, too .

Approaching 80 now, Bowser is a proud, locally rooted man, a civil engineer and former director of public works whose family goes back 150 years in the town, the man who beat the woman who transcends politics.

“I don’t have Obama’s cell phone number,” he cracked.

But he’s been to foreign countries as an emissary of East Orange goodwill.

His father served as a councilman and as a Republican assemblyman.

There’s a living wax figure museum on display this very night across town and someone is playing the role of the mayor.

He appears to relish bucking the Democratic Party establishment in Essex headed by County Executive Joe DiVincenzo, and tonight thundered against Lester Taylor, dismissing the challenger as little more than his opponents’ latest attempt to oversee the city’s $170 million budget.

“They want to get the fingers on a piece of the pie,” Bowser said.

There are two other challengers to Bowser – Freeholder Carol Clark and perennial candidate Kevin Taylor – and yes, there were prolonged howls of merriment among the mayor’s contingent about the good fortune of having two candidates named Taylor in the contest.

The mayor and his team repeatedly rejoiced in their East Orange roots while jeering at Taylor’s Long Branch origins.

Bowser’s aide, Troy Webster, will occupy the line as the incumbent’s gubernatorial candidate.

“They said Obama was a long shot,” Webster said. “If Obama could do it, so could Troy.”

Microphone in hand, Bowser said of his aide’s effort to become governor, “He is not jiving about this,” adding a moment later, however, that if Webster didn’t get his act together, “I may fire him.”

In a sense, it’s not too different from 2009, when during the general election, the Democratic gubernatorial campaign-sanctioned robocalls featured the name of Jon Corzine – almost as an afterthought – to the main exhortation, to vote for Bob Bowser. 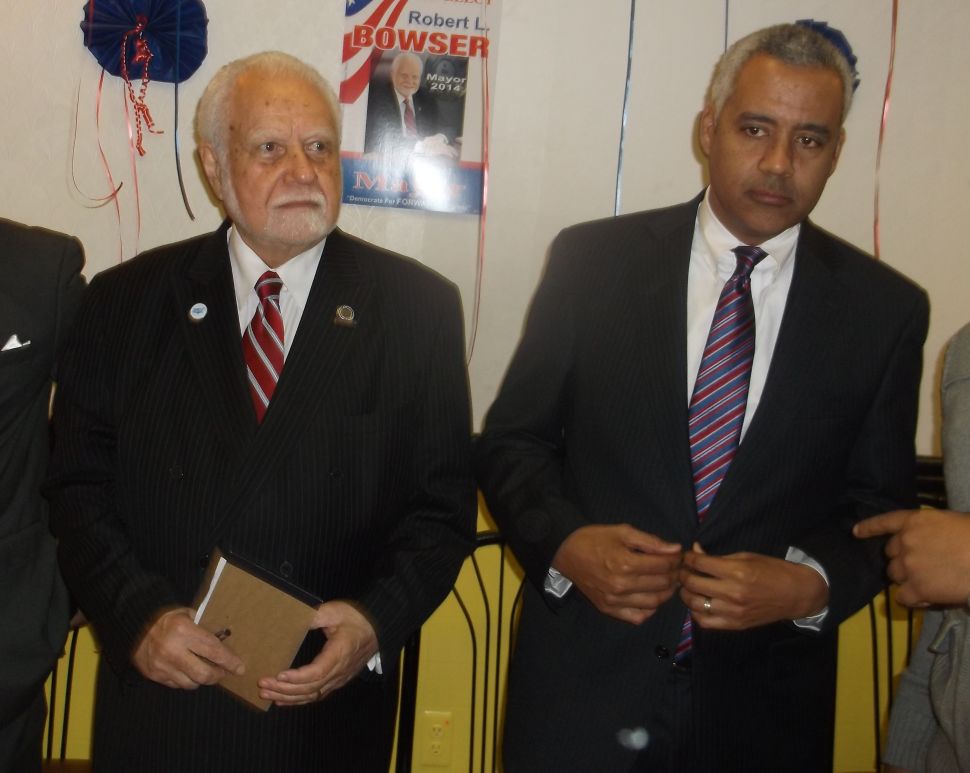