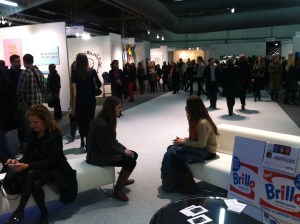 The scene at Armory Focus: USA. (The New York Observer)

Eric Shiner, the director of the Andy Warhol Museum and curator of this year’s Armory Focus: USA, was not just at the fair’s VIP preview, he was on the walls. “We’re famous! Did you see?” he asked collector Sue Stoffel with a grin. Both Mr. Shiner and Ms. Stoffel appear in one of the drawings in Liz Magic Laser’s presentation at the Various Small Fires booth.


“Esther the owner of the gallery, who I’ve known for a million years, said, ‘you’re going to hate me’ and I said, ‘why?’ and she said, ‘well, you know, you’re one of the works of art,” said Mr. Shiner. A courtroom sketch artist made the drawing (which Ms. Stoffel purchased) during a focus session in which Ms. Laser asked participants to discuss the nature of art and the art world (Ms. Laser exhibited videos of these conversations along with various documents from the Armory Show’s inner workings, such as the artist agreement form).

Chitra Ganesh, who showed at Wendi Norris Gallery, stopped to thank Mr. Shiner on her way out. “Very rarely do art fairs invite the artists and oftentimes their galleries tell them not to be around,” said Mr. Shiner. “I want the artists to be front and center because none of this would happen without the artists, none of it.” Just then, a former paparazzi photographer approached Mr. Shiner to offer her congratulations—and ask if he had an extra VIP pass. Mr. Shiner pulled one smoothly out of his wallet and handed it to her.

The work in Armory Focus: USA, culled from 17 established and emerging American galleries, ranged wildly. Giants like Gagosian Gallery, which installed Warhol self-portraits in a large booth covered in the artist’s effigies, appeared alongside younger galleries like Higher Pictures and On Stellar Rays.

At DODGEgallery, an antique Singer sewing machine was rapidly piercing tiny holes in a yellow ribbon running through it and onto the floor. Dan Cole, the artist, had connected the sewing machine to a computer under the desk, which was programmed to Google existential questions like “Who am I?” “How do I work?” The search results controlled the needle.

Over at Magnan Metz Gallery, a dealer was on her hands and knees helping visitors make rubbings of a large granite block. The artist, Duke Riley, was there to sign and edition each new work, creating free art for visitors to take home. The rubbings were a hit with participants: “This is the first piece of art I’ve made since I was six years old!” exclaimed a suited fellow who received rubbing number 10.

Mr. Riley, who covered the booth in mint green wallpaper depicting seals of various sexual orientations 69ing, installed a floor made of wood he salvaged from the Rockaways after Hurricane Sandy.

“When people come in here they’re thinking about an art fair, they’re not thinking about how there’s underneath us,” said Mr. Riley, who added that he wanted to create “the feeling that you’re on a dock because we’re in a space that’s denying that.”

Filed Under: Arts, the armory show