“Our team represents the diversity and make-up of the city we wish to represent,” said Blanco, a medical doctor running for his second term.  “Elected office comes with responsibility, and I look forward to working with our team to earn votes throughout our city. I look forward to knocking on doors and continuing my conversation with residents during this campaign for my re-election and the re-election of our team.”

There is an election for Mayor and four City Council positions on the ballot this May.  The upcoming municipal elections are scheduled for Tuesday, May 14.  The joint campaign also announced three campaign co-chairs: Wilfredo Baez, Jason Dukes and Zaida Polanco.  The campaign will announce other members of the campaign team in coming weeks.

“Mayor Blanco started a comeback from one of our city’s most difficult times.  I remember on May 9, 2008, I was required to serve as Passaic’s Acting Mayor,” said Council President and Assemblyman Gary Schaer, (D-36).  “And at a brief press conference I declared that the residents of Passaic deserve a municipal government that is honest and trustworthy.  Mayor Dr. Alex Blanco and members of this campaign team have been my partners to move forward and improve the quality of life for all our residents and families.”

“The City of Passaic has undergone many changes over the past four years.  And I will be campaigning with Mayor Blanco and our team to ask local residents and families for their support,” said Garcia.

“It is wonderful to be part of a team of candidates that work together for the best interest of all our city’s residents. ‘Move Passaic Forward’ is about focusing on honest government while making tough decisions that keep our city affordable,” added Councilman Terrence Love.

“We will work hard to continue to communicate our efforts to voters—whether increasing recreation opportunities for our school children to investing in parks to creating a more business friendly environment to attract new developments—and asking for their support,” said Melo.

Endorsed by former foe Vinny Capuana, Blanco is expected to receive his stiffest challenge this year from businessman Jose Sandoval. 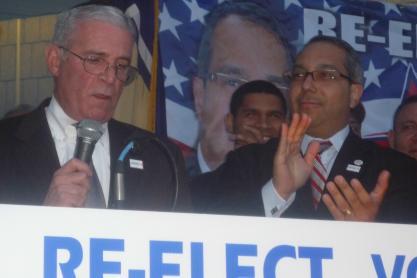