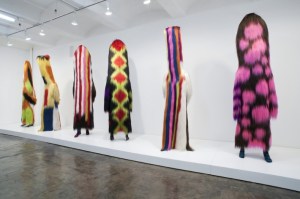 Jack Shainman Gallery announced today that it will add two new spaces to its program, one in Chelsea and the other an old school in Kinderhook, N.Y. The first space in Chelsea, formerly home to Marc Jancou gallery on West 24th Street, will open this Saturday.

Shainman’s current space on West 20th Street featured a good amount of underground space and was consequently hit hard by Hurricane Sandy in the fall. A gallery representative did not immediately respond to a question about whether or not Mr. Shainman intended to leave the 20th Street space.

The full Shainman release is below.

New York (March 1, 2013) ––Jack Shainman Gallery is pleased to announce its expansion with the addition of two new spaces. These spaces will add over 32,000 square feet combined to the gallery’s existing 9,000 square foot space on west 20th street in Chelsea.

The first of two spaces is the 2,400 square foot ground floor of 524 West 24th Street, four blocks north of the gallery’s current location. It will be used as an auxiliary space for the gallery allowing artists to show their newest work, or additional projects concurrently with their exhibitions in the flagship space.

The second space is a 30,000 square foot school building in Kinderhook, NY built in 1929. The building, dedicated by Franklin Delano Roosevelt, will function as a home for the gallery collection as well as a space for special exhibitions during the summer. The many classrooms will be used as viewing rooms. In addition, the property has 5 acres of outdoor space for a sculpture park. Just two hours from Chelsea, The School is near a number of art institutions including Mass MoCA, The Clark Institute, the Hessel Museum of Art at Bard College, and the future site of the Marina Abramović Institute.

The gallery has a large collection of works built over the years that has rarely had the chance to be seen. The hope is to have these works, as well as works by artists on the gallery’s roster, on view in a quieter more contemplative environment than the Chelsea gallery scene. The School hopes to engage with the surrounding community by eventually hosting artist residencies.

This expansion is a natural progression as the gallery artists continue to grow and evolve. Many have met with great success, and the gallery staff has expanded to meet their needs and keep growing with them. The expansion gives the gallery the added ability to mount larger exhibitions that delve deeper into each artist’s body of work.

The 24th Street space will open this Saturday in conjunction with Barkley L. Hendricks’ exhibition at the 20th Street location. The exhibition will include new paintings in a similar vein for which the artist is most known, with a selection of lesser known photographs Hendricks has been taking since the late 1960s. The auxiliary space will allow the artist to introduce this part of his practice to a large audience for the first time.

As stated by Jack Shainman, “We are deeply committed to our artists and have always been driven by their success. It’s an amazing feeling to be able to grow alongside them.”

Upcoming exhibitions at the gallery include:

Gallery hours are Tuesday through Saturday from 10 am to 6 pm. For additional information and photographic material please contact Elisabeth Sann at elisabeth@jackshainman.com.