Asked about how much money he has raised or will raise toward his Jersey City mayoral campaign and ex-Seton Hall basketball star Jerry Walker thunders against drugs on the streets, including what he calls the latest worst affliction to local youth called dip: PCP dipped in embalming fluid and smoked.

“It’s driving them crazy,” said Walker, who founded and runs his own after-school non-profit, Team Walker. “It’s turning them into zombies.”

Overshadowed to date by incumbent Jersey City Mayor Jerry Healy and Downtown City Councilman Steve Fulop, Walker has raised little money to date in his quest to be the next mayor, but he claims that simply enhances his ability to resist special interests as he attempts to reconceive a people’s city hall.

“God bless Mayor Glenn Cunningham,” said Walker, who grew up seeing the late ex-mayor walk a police beat. “A lot of stuff he started is not being done, and if elected mayor I would reinvigorate community policing and the second chance program, to give our people who are nonviolent offenders an opportunity to expunge their police records. We need to create opportunities for law-abiding citizens and that includes giving our youth a second chance.”

The 40-year old Walker says he delayed his decision to get in the Jersey City Mayor’s race out of respect for state Sen. Sandra Cunningham (D-31), Mayor Cunningham’s widow, but now that he’s in, he’s committed to victory.

“Absolutely,” he said, when asked if he is in to win. “I’m a winner. I got in late because I grew up respecting my elders and respecting people who came before me.”

He’s not a plant by one of the other campaigns to drain votes. “Hand on the Bible, no,” Walker said, “and I’m a Christian man.”

He’s running, he said, because he believes most people in Jersey City want an alternative.

“We all thought at the beginning that Senator Cunningham was going to run and was willing to run but she decided at the 12th hour that she wasn’t going to do it. We don’t want people to take our vote for granted,” Walker said.

“There are 26,000 registered African-American voters in Jersey City and in the last mayoral election just 20 percent came out to vote,” he added. “Whenever I have a nonprofit party, my stipulation was you have to register to vote. Many young people haven’t voted in an election yet because they don’t feel part of the process. It’s ridiculous. This is a privilege. But these kids don’t feel connected to city hall.”

Walker said the youth will relate to him because he comes from the streets of Jersey City. He said he goes to the funerals of young people killed.

He’s even paid for some funerals.

“Jerry Healy and Steve Fulop may know them, but I’m connected to them,” the candidate said. “These young people relate to me because I grew up in the same struggles.”

Despite his deep roots in the city – including a grandfather, James “Pop” Curry, who was a community activist and is a member of the Jersey City Hall of Fame – Walker has found himself fighting the residency question since he says he bought an apartment in West Orange.

“I have so much stuff to prove that I am a resident of 335 Pacific Avenue, where I have lived in  Jersey City for well over a year,” he  said. “My local license has an issue date of 03-13-2012. I did rent an apartment in West Orange but I’ve been living here over a year.”

Jersey City Clerk Robert Byrne said he has no reason to disbelieve Walker, though he has received anonymous correspondence packaging articles and other materials trying to show that Walker does not live in Jersey City.

“It’s not dispositive of anything,” Byrne told PolitickerNJ.com in reference to the materials discrediting the candidate. “Someone is going to have to have to come out there with evidence and a judge would have to decide.”

“My job is to take the petitions and take them at face value,” said the clerk. “Jerry Walker swore in statements submitted to my office that he has been a resident of Jersey City for a specific period of time.”

A person must be a resident of Jersey for one year prior to Election Day in order to be eligible to run for mayor.

Walker said the hoopla around his residency derives from newspaper clippings taken out of context.

“Not one of these guys is out there working with the people,” he said. “My message is stop the bickering.”

He wants to raise enough money to go up on television. Next Monday he has a fundraiser scheduled at McClone’s Boathouse in West Orange.

“I’m doing this to make Jersey City better,” Walker said. “I was fortunate to receive an education. I was exposed to a lot growing up because of my educational ability. I’m going to still do my part to improve the quality of life here.”

Asked to distinguish himself on a single issue, he refers to community policing in the city.

“Those other guys are starting to talk about it but that’s the one thing in my platform I really want to emphasize,” Walker said. “Growing up in the Bergen Lafayette community the cops were part of the community. Glenn Cunningham was the officer and he knew the people and the business owners and he had relationships and that helped him to prevent crime. My thing is to prevent the community from going in the wrong direction. That’s why I’m here.” 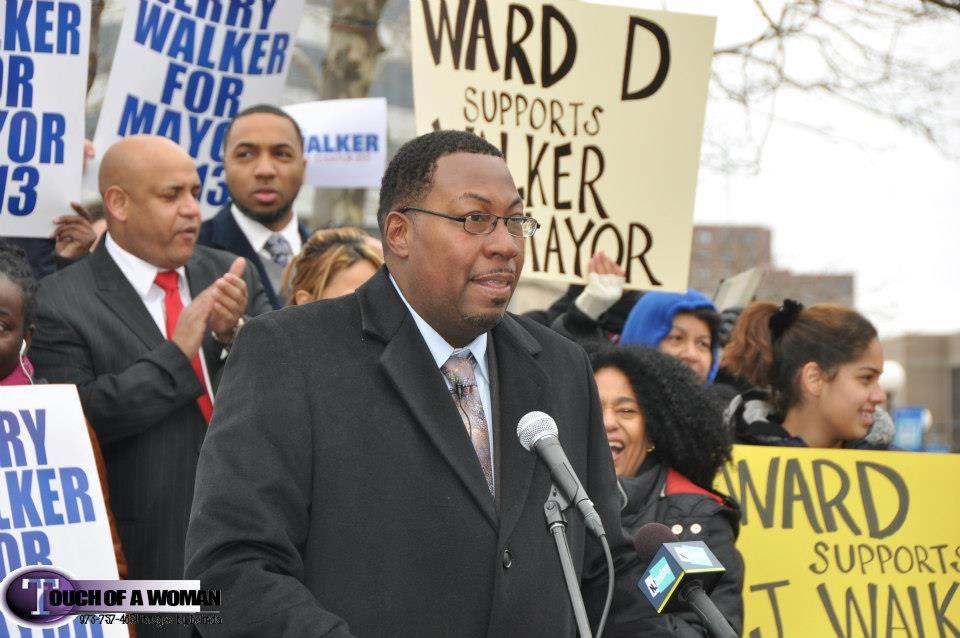