Do high-powered tech types have any idea of the right way to spend a weekend? Apparently not: When VC and former Square COO Keith Rabois made a critical, slightly snide remark about how Foursquare is faring, he ignited a two-day-long tussle over when it’s okay to criticize a founder.

I swear, sometimes you’d think we were covering the goings-on among seventh-grade cliques.

It all started when newly minted VC Hunter Walk tweeted, “Wow, who knew 40,000 developers use the @foursquare API…” Pretty innocuous! But it seems Mr. Rabois couldn’t contain a smart remark, and so began the sequel to his Twitter brawl with @dens from back in November:

We assume it’s the months of rumors about a possible down round that has Mr. Crowley so sensitive.

Buddy Media founder Michael Lazerow chimed in (on his LinkedIn blog), tut-tutting Mr. Rabois for daring to shit-talk a founder. Mr. Lazerow complained that “founder-on-founder verbal violence seems to be at an all-time high” and then proceeded to take a swipe at Mr. Rabois, pointing out that as helpful as he is, well, he’s never started a company, which apparently makes him a second-class citizen in the Valley:

Keith was the Art Garfunkel to the Paul Simon of each of his companies. The Barney Fife to each of his Sheriff Taylors. Change Entourage to Entrepreneurage and Keith is Turtle to the Vincent that is Jack Dorsey.

Business Insider added some real value with a recap that confused Square and Foursquare, as well as mixing up Mr. Walk and the Observer‘s own Hunter Walker. Whoopsie daisy!

@Dens ducked out to run a half-marathon, as one does, but that doesn’t mean Foursquare’s honor was simply there for the besmirching. Anil Dash strapped on his suit of shining armor and pointed out that Mr. Rabois is on the board of Yelp and maybe he ought to bring that little tidbit up when he criticizes Fourquare:

Whatever your thoughts on the future of Foursquare, surely we can all rally around of keeping hashtags like #hatersclub out of our tech talk? 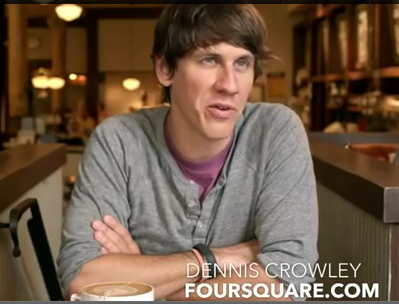