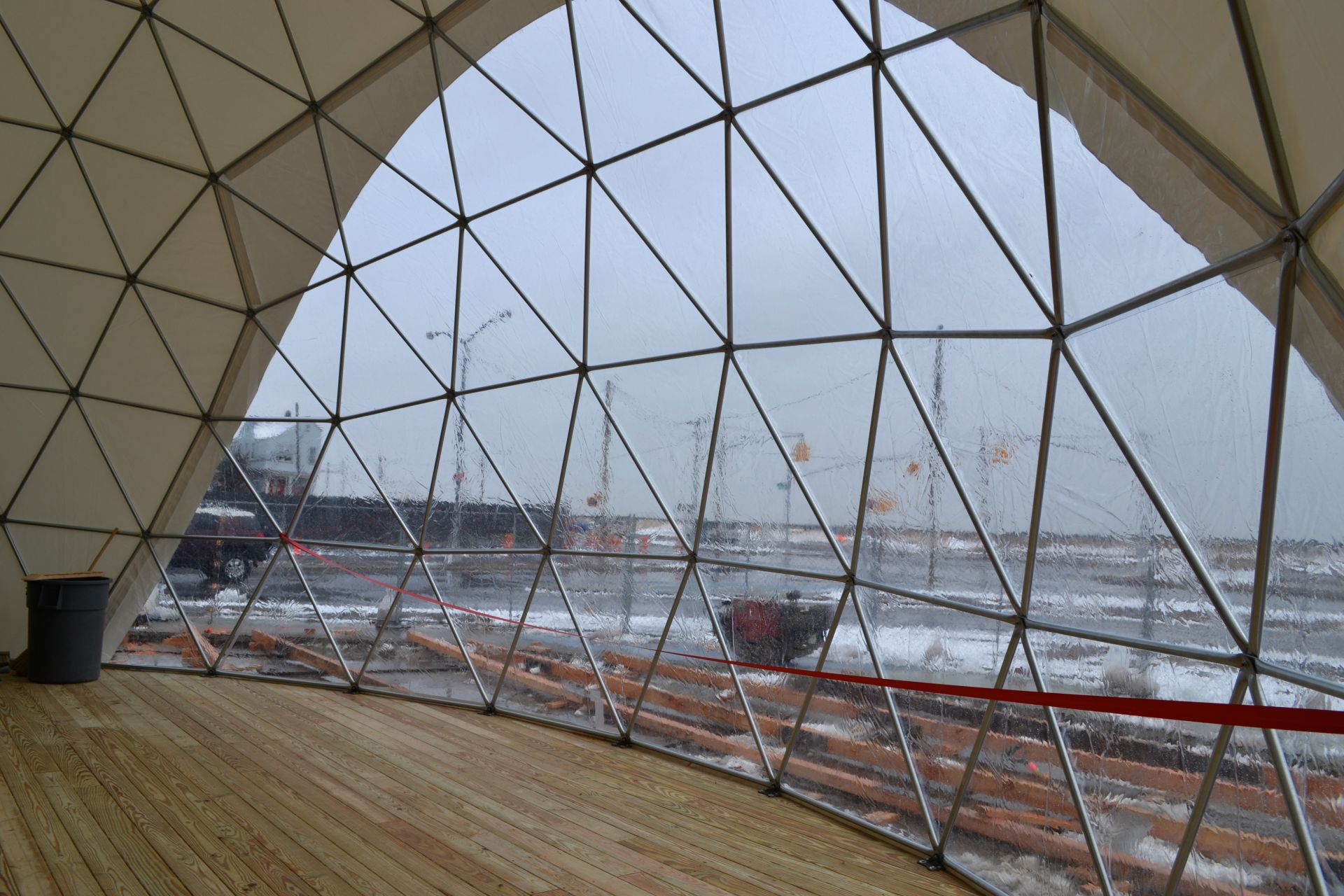 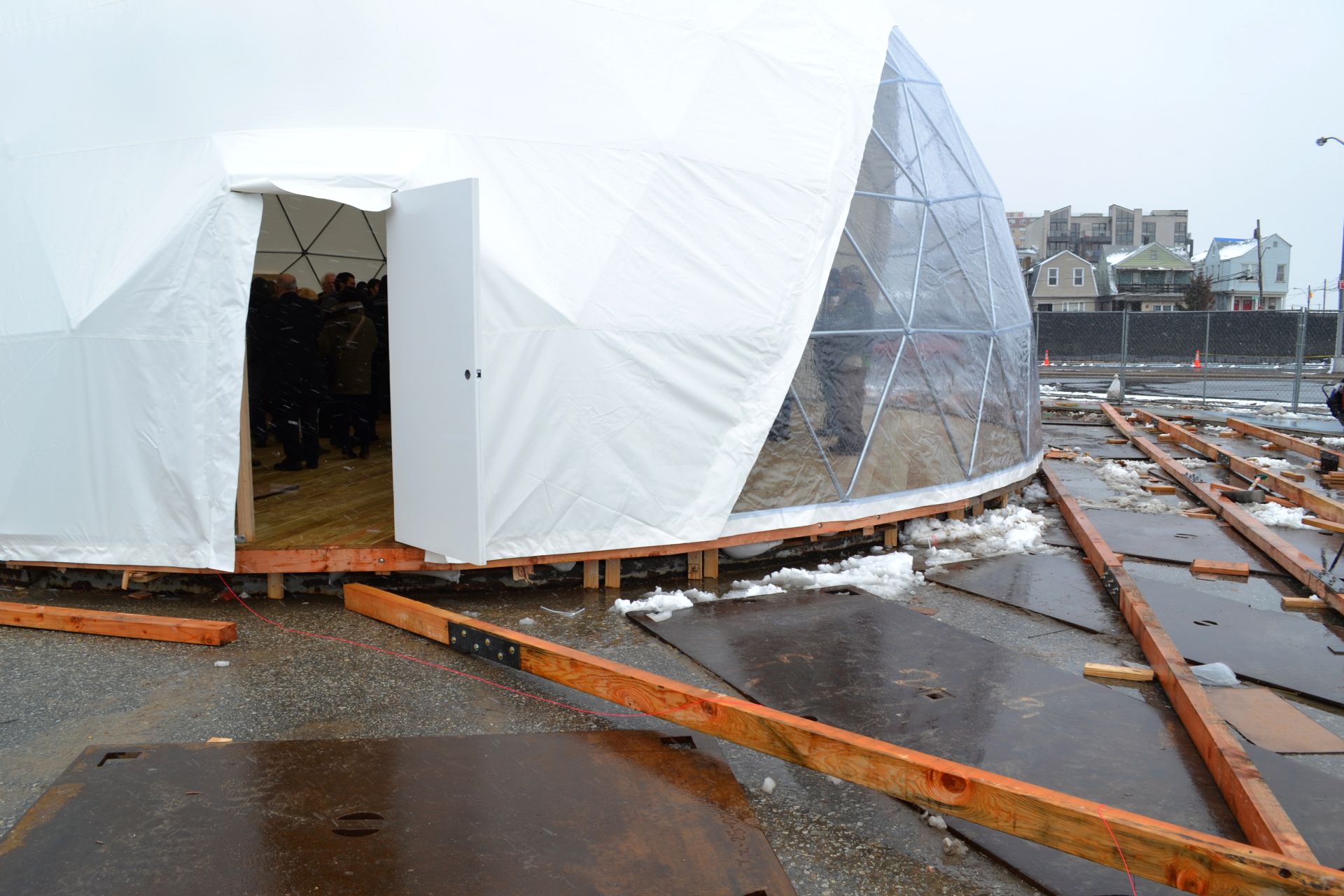 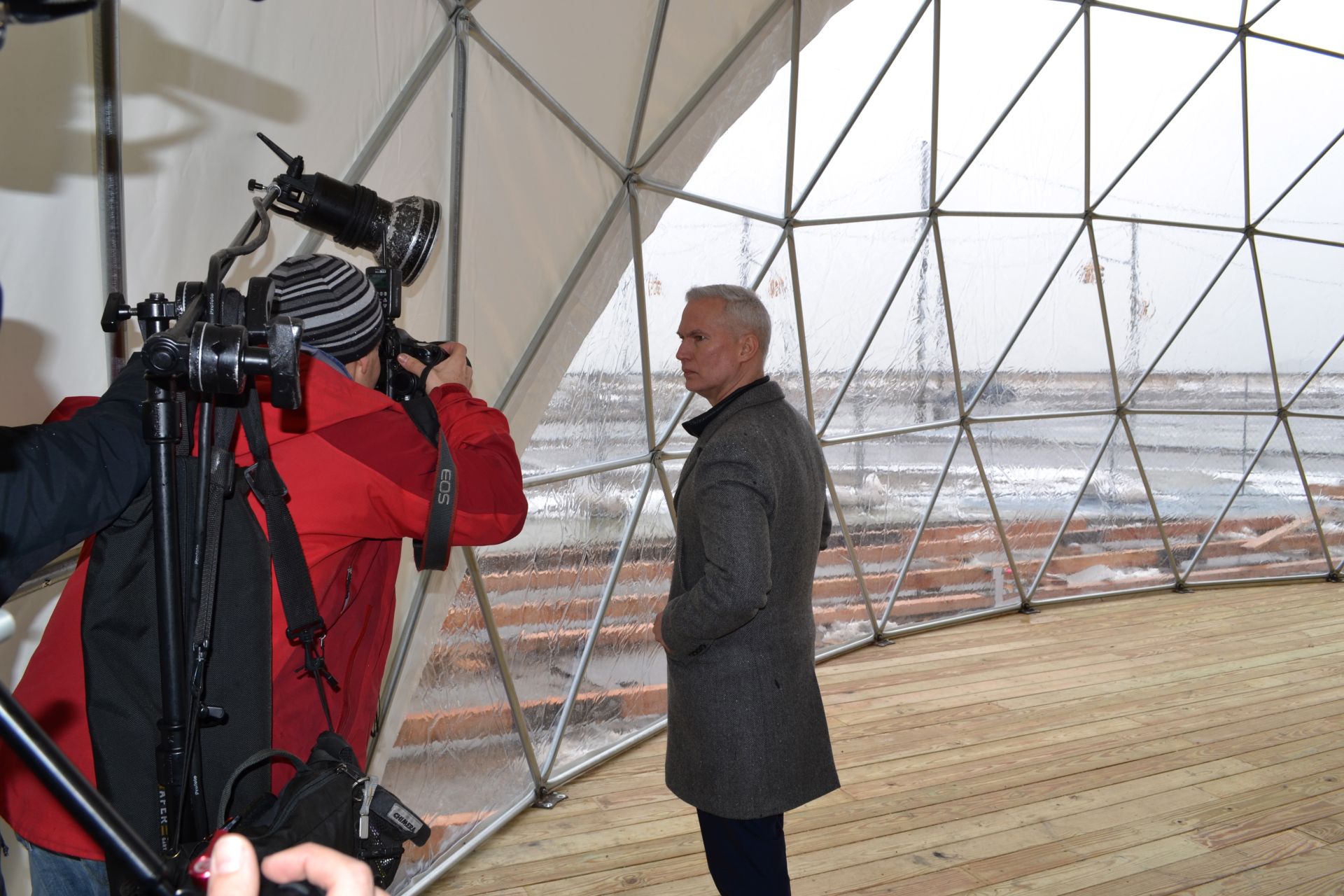 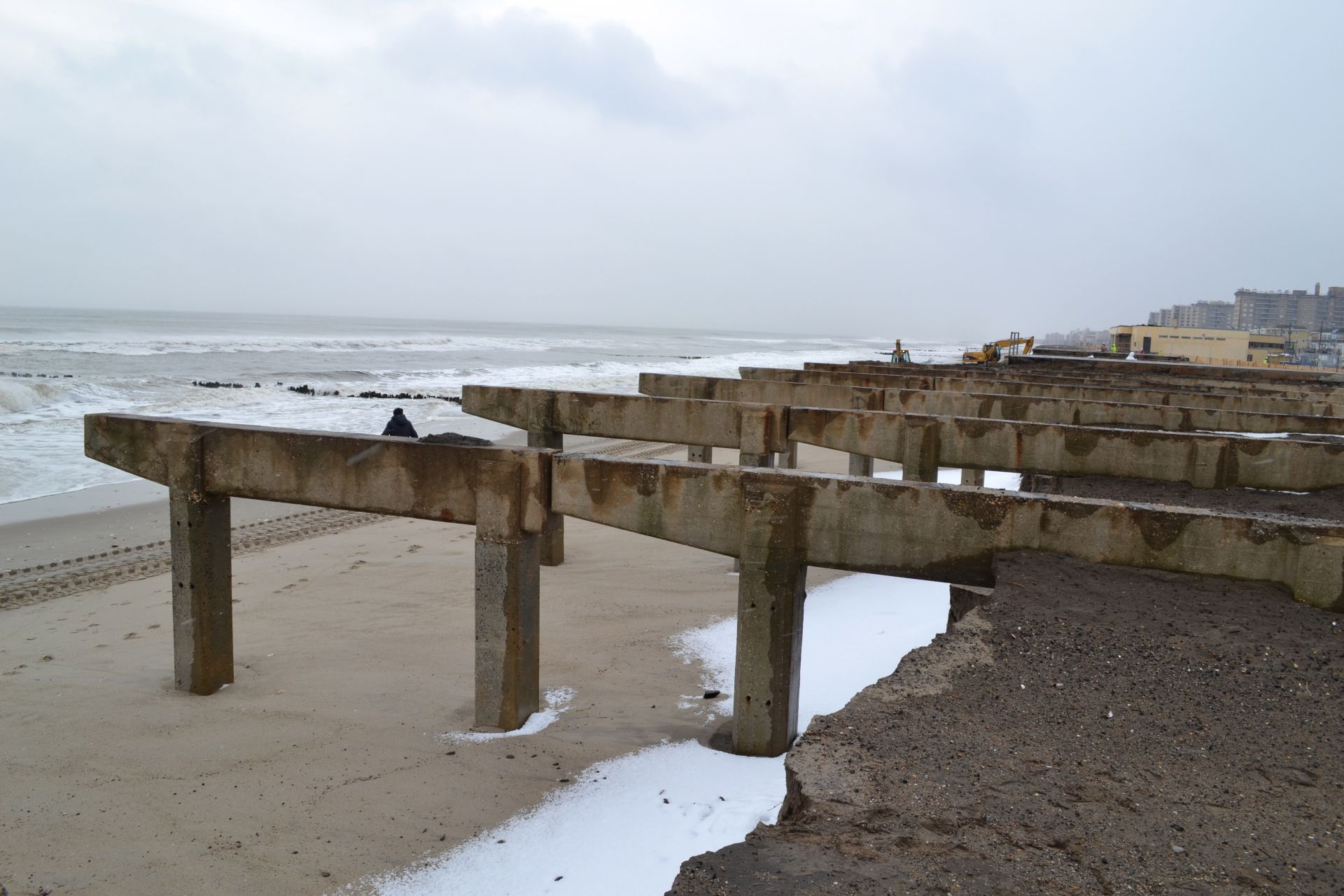 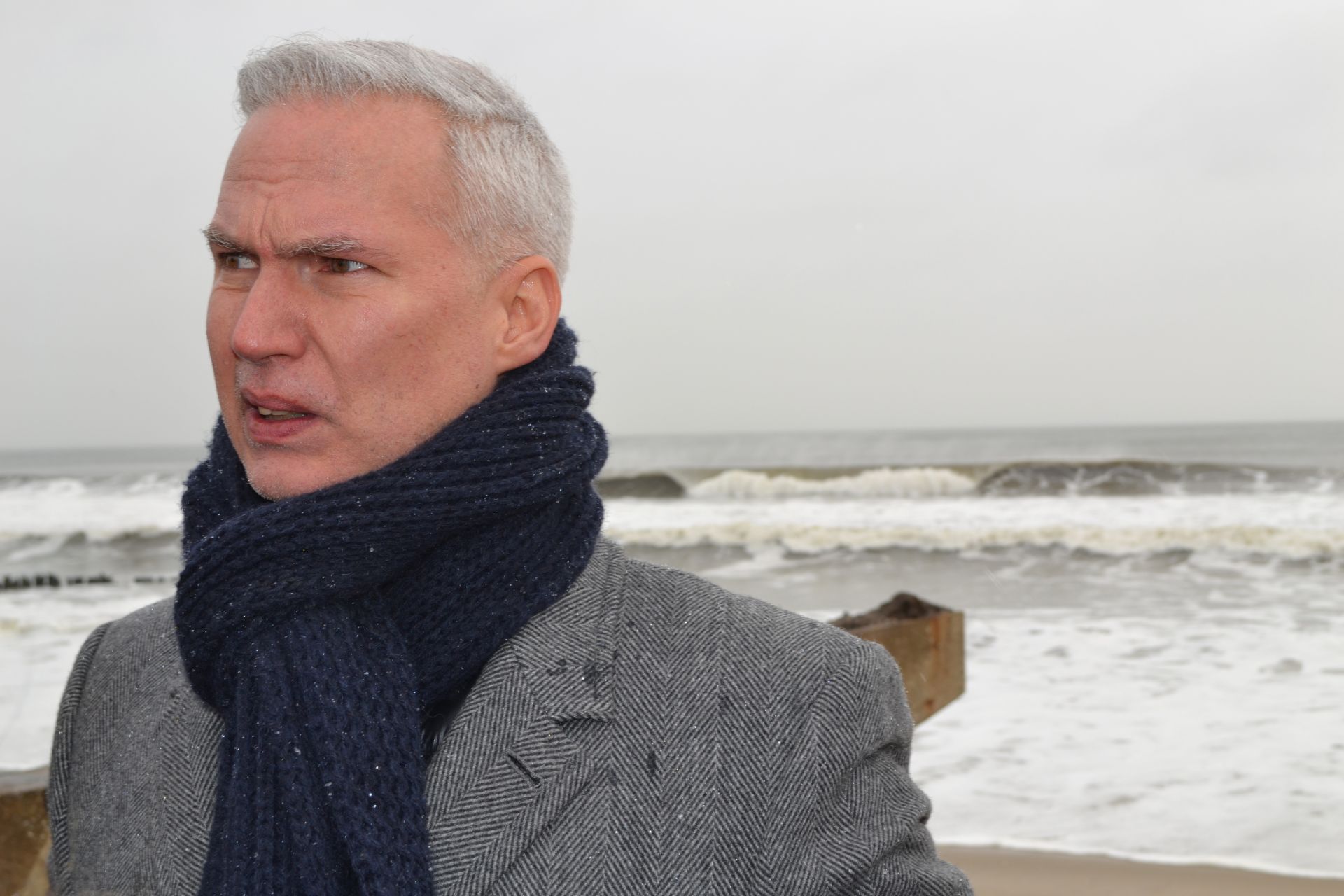 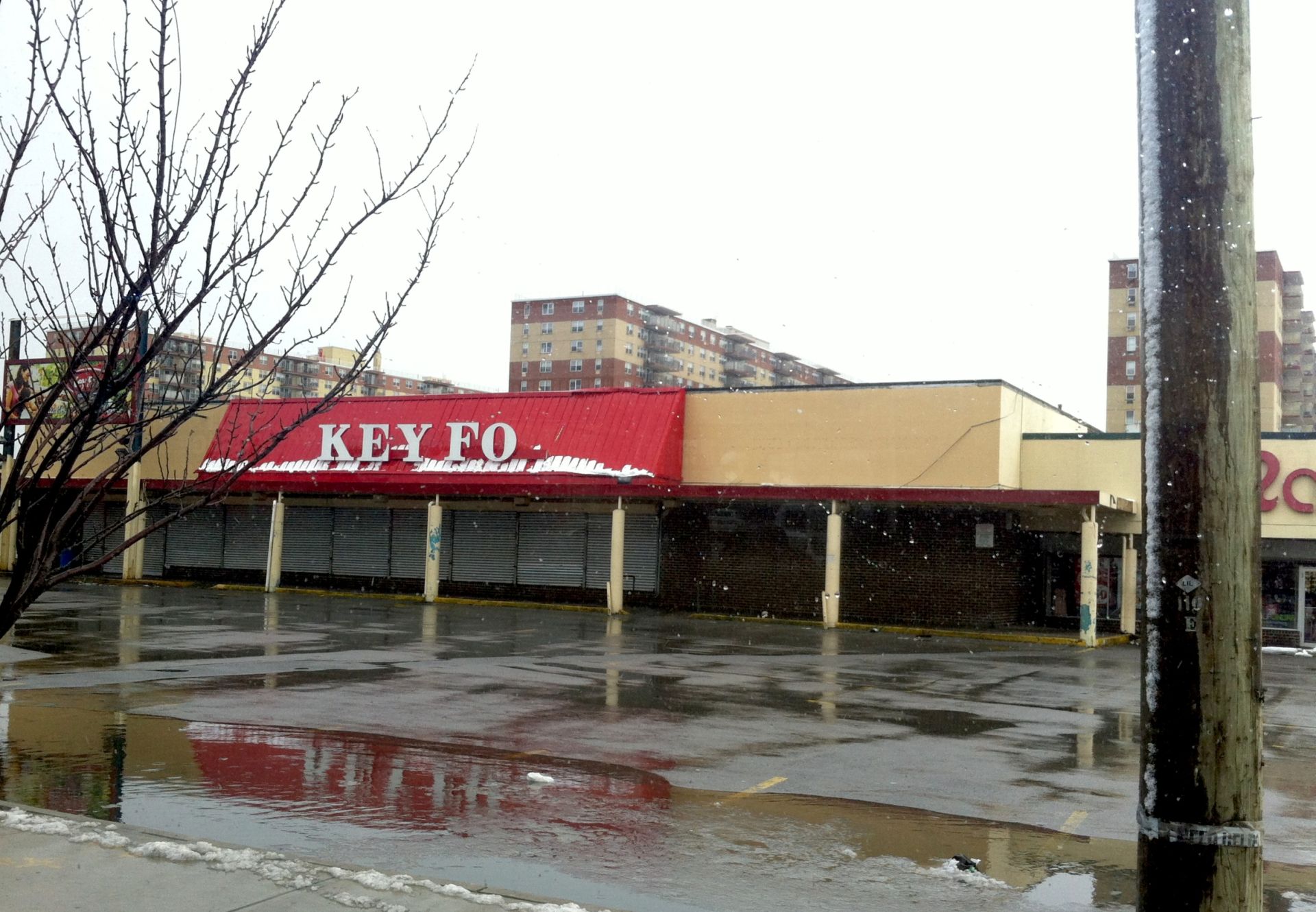 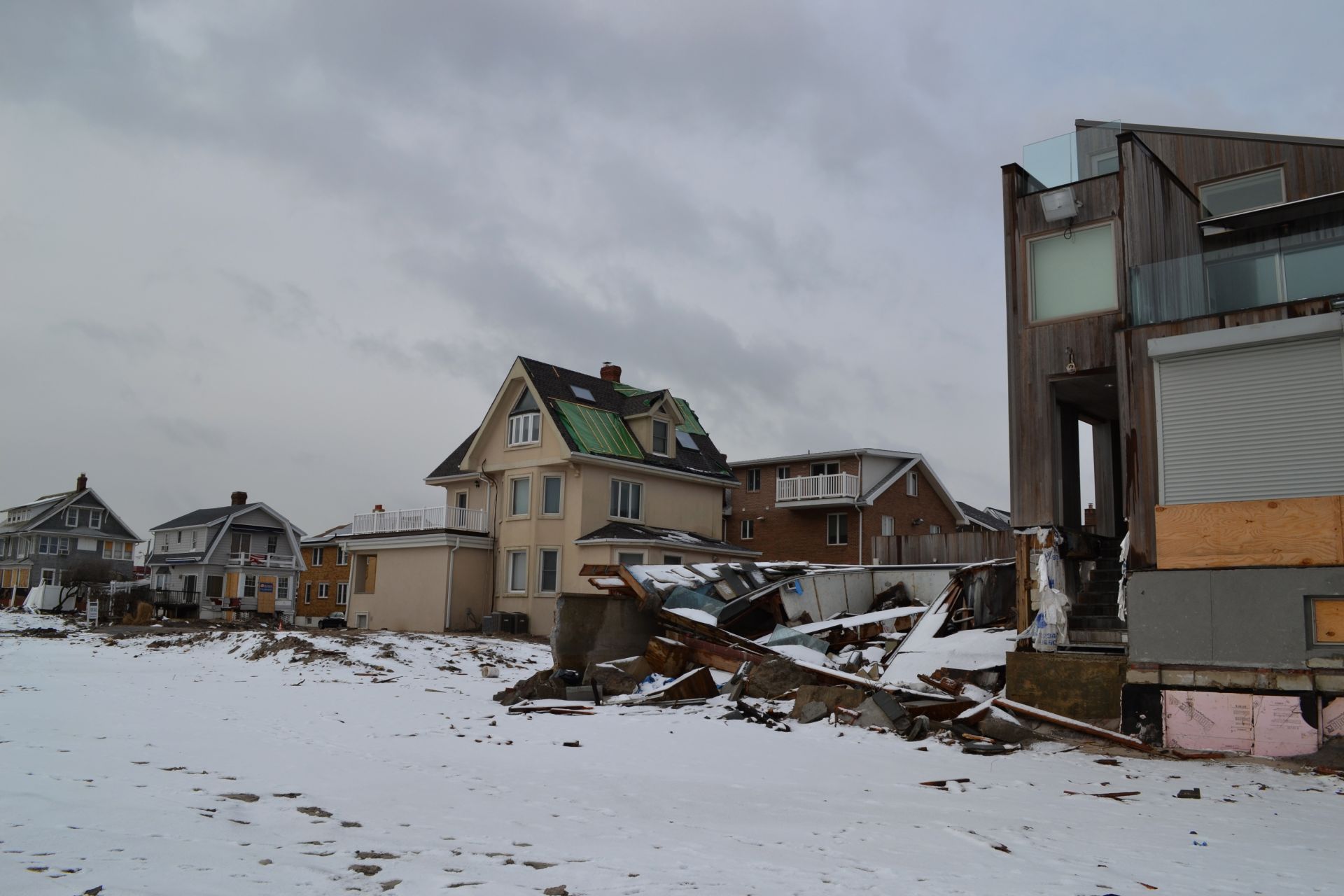 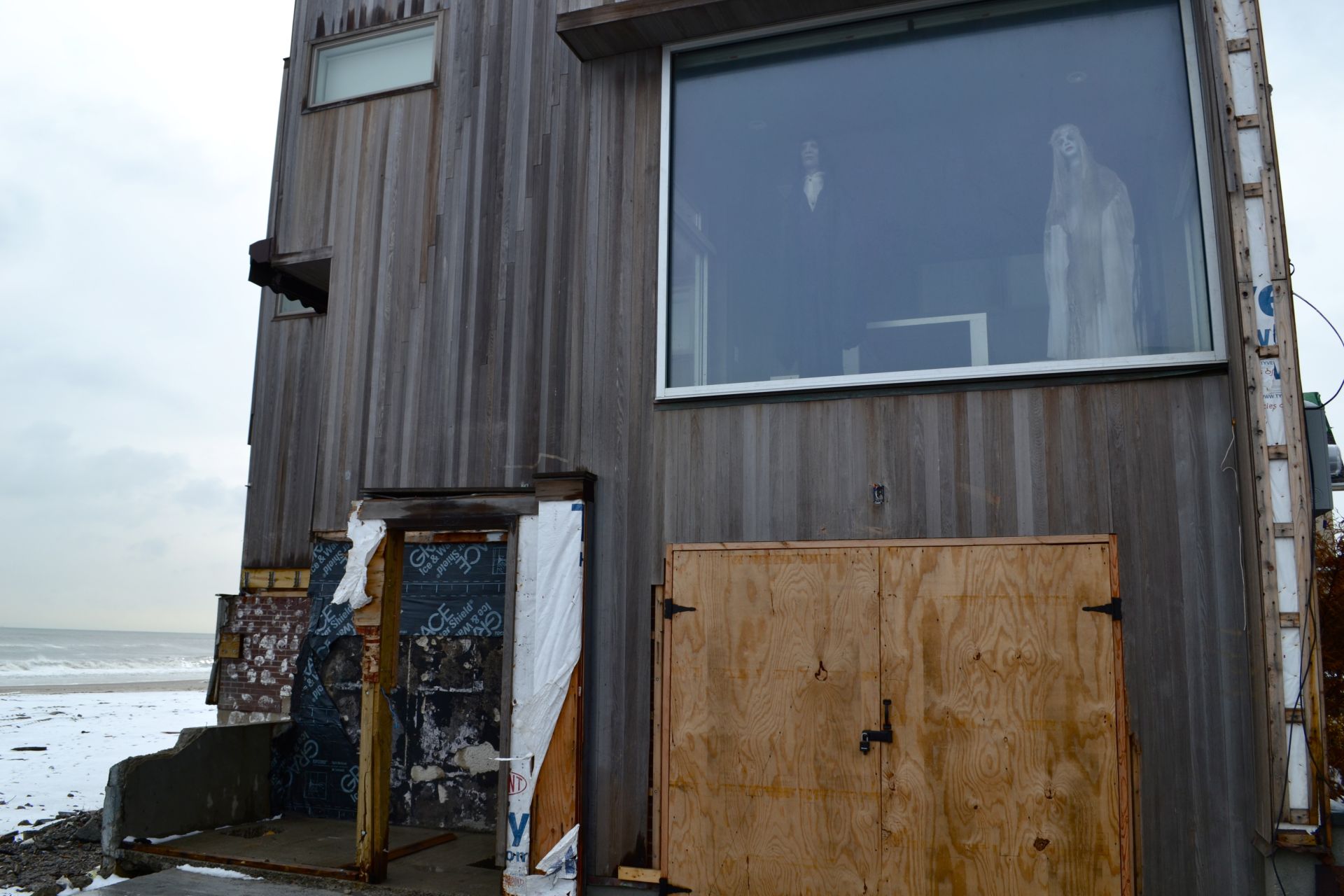 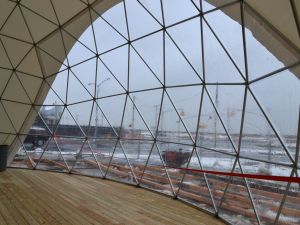 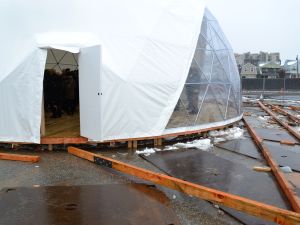 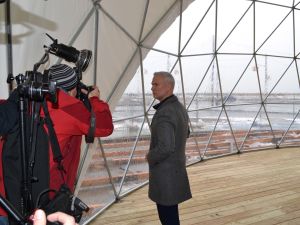 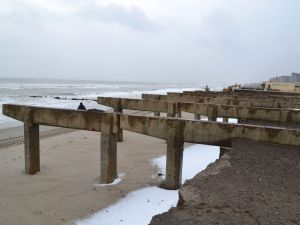 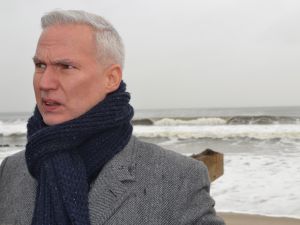 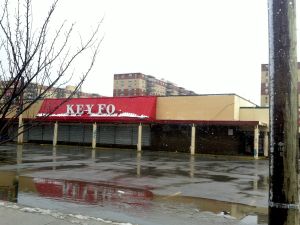 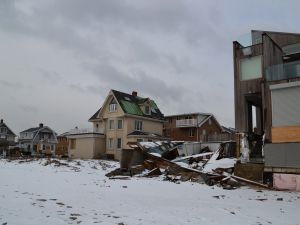 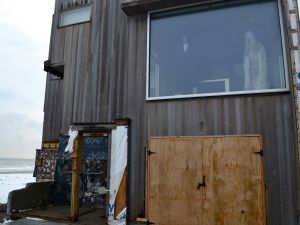 “At last!” exclaimed Klaus Biesenbach, director of MoMA PS1, as the bus bounced onto Crossbay Boulevard, a skinny ribbon of road surrounded by choppy water. The storm had started hours before the private bus left MoMA last Friday around noon, and the snow kept falling as the vehicle barreled past cemeteries, hair salons and kids off from school, en route to the Rockaways. The tinted windows were fogged with the heat given off by roughly 20 members of the press. Some drew pictures in the condensation. When Mr. Biesenbach announced that the VW Dome 2 was drawing near, everyone began rubbing their sleeves on the steamy glass to catch a glimpse of where they were.

The geodesic structure, a smaller version of the one currently installed in MoMA PS1’s courtyard, is situated near the ocean between Beach 94th and Beach 95th Streets, and will serve as a temporary community and cultural space for the next few months. In conjunction with “Expo 1: New York,” the upcoming MoMA PS1 show aimed at tackling environmental, economic and sociopolitical issues, Dome 2 will host lectures, rotating exhibitions, screenings and performances addressing the challenges that the Rockaways face in the wake of Hurricane Sandy.

“Isn’t it beautiful?” Mr. Biesenbach asked as he charged toward the nearly finished structure. Inside the clean, light-filled space, visitors queued up for coffee, miso soup and baked sweet potatoes (courtesy Rockaway Taco) before stepping back to admire the design and peer through a transparent panel facing the Atlantic. New York State Assemblyman Phil Goldfeder, Benita von Maltzahn, the head of the new culture and corporate social responsibility department at Volkswagen, community board members, Parks & Recreation representatives and members of the Rockaway Beach Surf Club (which was instrumental in Sandy relief) chatted amiably about the upcoming programming.

A few members of the 15 people who built the dome were present, hanging out by a pile of equipment on its west side. Evan Wagner, who wore a bright red jumpsuit that one of the welders lent him, noted that the bad weather had not hampered construction—it actually helped. “The wind’s how we got the skin over it,” he said. “We waited for the gusts.”

After a ribbon-cutting ceremony, Mr. Biesenbach, who owns a small house in the Rockaways and led weekly relief trips in the wake of the storm, took a group up to where the boardwalk used to be. Standing with his back to the ocean, he spoke in English and German about how much rebuilding still needs to done, his silver hair blending into the sky behind him. Back on the bus, he directed a driving tour of the devastation. Most of the shops, supermarkets, dentists and laundromats lining Rockaway Beach Boulevard, the peninsula’s once-bustling main drag, were shuttered (though at least one liquor store was open for business). Salt water had killed nearly all the vegetation, and many of the dead bushes and trees were a sickly yellow color. “The beach was everywhere,” said Mr. Biesenbach as he pointed out areas the storm had buried under three feet of sand.

Approaching the tour’s final stop, a stretch of beach littered with debris from half-destroyed houses, the bus driver asked whether he should turn left on Beach 139th Street. “No, we’ll park here [on the boulevard],” said Mr. Biesenbach. “We don’t want to be disaster tourists: ‘Oh, we come with a bus, we’ve come to see your misery!’” One of the most haunting monuments to how the storm arrested life last October was a house standing right at the sand. Two life-size Halloween decorations, a vampiric man and woman, looked out of a window onto the wreckage.

For images of the VW Dome 2 and the state of the Rockaways, click the slide show above.