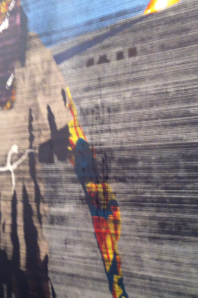 On the VIP preview day, just about every booth at just about every major art fair features a bottle of champagne for potential buyers. It’s there to celebrate purchases, and the show itself. It’s anytime champagne, free and fun. Last night at the Armory Show, though, the London-based Lisson Gallery had a little mishap with theirs.

My boss Sarah Douglas, who is too busy to write this post, spotted a crowd around the Lisson booth just as she was leaving last night around 6:30 p.m. She only saw the aftermath (left), so it was hard to tell who was responsible, but it appears as though someone opened a champagne bottle with a little too much fervor and accidentally sprayed a wall piece by the artist duo Allora & Calzadilla. When she arrived, Alex Logsdail, son of Lisson founder Nicholas, was wiping the piece with paper towels.

According to Artnet, Allora & Calzadilla’s auction record is $154,496.

It’s almost certain that nothing was damaged. But keep an eye on that champagne, everybody. It’s not as harmless as you think.