Mayor Bloomberg and Governor Cuomo, as seen on Instagram.

If their administrations could be summed by Instagram alone, Mayor Michael Bloomberg and Governor Andrew Cuomo would be a fascinating study in contrasts.  And one of the two top Empire State politicians is clearly much more at home on the popular photo sharing site.

Mr. Bloomberg’s Instagram page has a good deal of humor with pictures of the mayor mugging for the cameras alongside costumed characters, celebrities, children and city workers. Hizzoner’s Instagram also has it’s more serious shots such as depictions of the devastation wrought by Hurricane Sandy and photos of solemn memorial services. However, these more somber moments are softened by artistic touches, liberal use of Instagram’s signature nostalgic filters and compositions that let iconic architecture and picturesque natural elements take center stage. The page also includes a photographic tour of New York City landmarks captured at particularly picturesque opportunities with impressive fog, technicolor sunsets and bright blue skies. Meanwhile, Mr. Cuomo’s Instagram account, eschews the artistry of the City Hall page for a decidedly more macho approach characterized by spare usage of filters, a focus on photos of the governor, in his signature “Team Cuomo” windbreaker, on scene responding to weather emergencies and several shots of construction equipment and vehicles including planes, trains and automobiles. Mr. Cuomo is also depicted in some dramatic on-the-job scenes including the governor gravely fielding phone calls at the Office of Emergency Management during preparation for Hurricane Sandy, making speeches at multiple public events surrounded by his official regalia, fishing and flexing his muscles for an annual flu shot.

In an email, Julie Wood, a spokeswoman for Mr. Bloomberg, who manages the mayoral Instagram account, described making the page a mixture of branding and beauty.

“We use the account to and highlight important initiatives and projects of the Administration’s, and also to showcase all the wonderful parts of New York City,” Ms. Wood said. “I try to choose photos that are both visually compelling and also relevant to our Administration’s long-term goals … or current focus on any given day.”

“We launched our instagram account  just a few months ago but since then we have been using it to give the public a firsthand view of the activities of the Governor and State Government – it’s been a more visual addition to what we communicate via twitter and facebook,” Mr. Cuomo’s spokesman Matthew Wing wrote in an email.

So far, Mr. Bloomberg’s Instagram persona has clearly caught on far more with the site’s users. The mayor has both a page for his administration and a personal page that, according to Ms. Wood, was created to focus on his wider philanthropic and advocacy endeavors. With both pages combined Mayor Bloomberg has amassed over 45,000 followers on the site compared to Mr. Cuomo, who has just 1,265 on his single account. Mr. Bloomberg’s many celebrity cameos (including the Muppets, Lady Gaga and even a Jonas Brother) have unquestionably helped fuel his page’s popularity, but the different approach the two politicians have taken to the site could also explain why the mayor has had more Instagram success than the governor. Both men are notoriously image-conscious with Mr. Bloomberg eager to brand himself as a technocratic administrator focused on finding data-supported solutions rather than partisanship and Mr. Cuomo, who is an especially careful steward of his image as a no-nonsense, bipartisan reformer dedicated to rebuilding a formerly broken state government apparatus. However, Mr. Bloomberg seems to have been more willing to allow his aides to create a specifically tailored version of his brand for the Instagram audience. If Mr. Cuomo truly wants to make a dent with the infamously twee aesthetes in the Instagram demographic, he might want to take a page from Mr. Bloomberg’s playbook and lighten up his muscular mixture of heavy machinery and action shots with some star power, scenic sunsets and maybe even a few jokes. 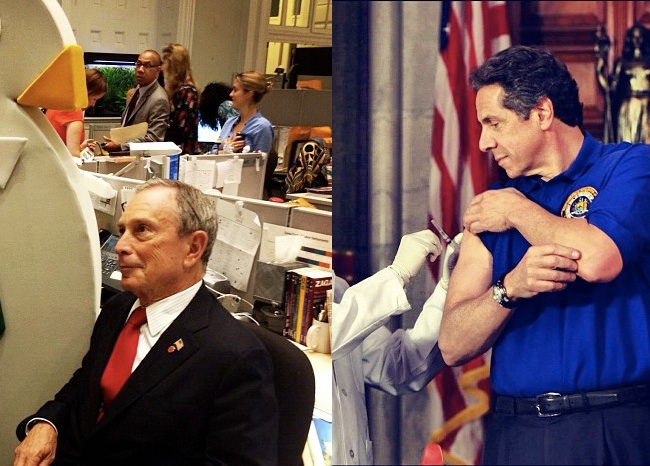