Over the weekend Mayor Michael Bloomberg unveiled a $12 million ad campaign dedicated to pushing senators to back legislation that would expand background checks against gun buyers. This ad blitz was the latest salvo in the expensive attack on illegal guns the billionaire mayor has focused on in recent months and it prompted National Rifle Association Executive Vice President Wayne LaPierre to accuse him of trying to “buy America.” At a press conference this afternoon where he was announcing a new program to help connect low-income city residents with job opportunities, many of the questions Mayor Bloomberg fielded from reporters were about his war of words with the NRA. Mayor Bloomberg first addressed the response he’s received after announcing the ad campaign and said an “enormous number” of people have thanked him for the commercials.

“Nobody’s going to walk up to me and say bad things, so I’m not so sure that I can actually represent, but I’ve just had lots and lots of phone calls, text messages, emails, people in the street … that are just so thankful that somebody’s willing to stand up and to counter the NRA,” he said.

Mayor Bloomberg went on to question the logic behind the NRA criticizing the amount of money he’s spent advocating for gun control.

“The NRA has spent $100 million and they object to my ten million … or whatever the number is,” said Mayor Bloomberg. “They’ve had it their own way they keep trying to say what’s going on from their point of view.”

He went on to say the NRA believed “there is no other point of view.” Bringing up the approximately $2.5 million he recently spent to back a pro-gun control House candidate in Illinois, Mayor Bloomberg said he was merely trying to present an alternative perspective. The mayor’s candidate, Robin Kelly, was victorious in a race his aides said they had been able to turn into a “referendum on guns.”

“In Illinois, I spent a couple million bucks and gave another point of view on terms of how people had voted, and the pub listened and then the public decided,” explained Mayor Bloomberg. “Nobody’s buying votes. What you are doing is, you’re getting access with this money to tell the public the facts. For example, Joe Smith voted for, or Joe Smith voted against this bill and this bill does x, y, z or doesn’t do a, b, c. And then, let the public decide.”

When he responded to the ad campaign, Mr. LaPierre cited the mayor’s previous anti-obesity initiatives and described the gun control efforts as part of a pattern of Mayor Bloomberg trying to use money to “impose his will on the American public.” Another reporter at this afternoon’s press conference asked Mayor Bloomberg why he thought Mr. LaPierre was focusing on him personally rather than the content of his commercials.

“He doesn’t have an argument,” Mayor Bloomberg said of Mr. LaPierre. “Standing there and saying, ‘Oh, I think we should leave guns in the hands of people that kill everybody and put our kids in danger,’ is probably not a good strategy for him. So, he’s got to find spomething else to talk about.”

Politicker then asked Mayor Bloomberg what he thought about the fact NRA robocalls against gun control legislation have been received by residents of Newtown, Connecticut, which was the site of the mass shooting at Sandy Hook Elementary School in December. At this point, Mayor Bloomberg was in no mood to discuss the gun battle any further.

“Enough with the NRA,” he said, attempting to move to another question.

However, we pressed the point and Mayor Bloomberg said the NRA “ought to be ashamed” for making their robocalls in Newtown.

“You know, sometimes people just dont express–don’t use good judgement. I guess the word shameless sort of comes up,” said Mayor Bloomberg. “Of all the places you shouldn’t be doing robocalls, I would think most people would say that’s not a good place to do it. They ought to be ashamed.” 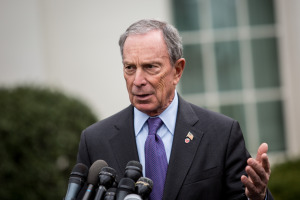